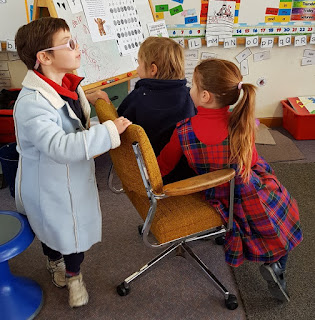 Thursday 23rd: My drop off photo this week. Asher spotted the two girls on the teachers chair. The children often swing each other around on it. So it was heart warming for me to see Asher go over and start pushing the girls around. I had to make sure she changed direction after a while and then stopped after a while going the other way. Asher will get very dizzy and not stop. I'm not convinced yet that too much head movement won't trigger seizures, so we have to just help her from overdoing things. It was really special though. 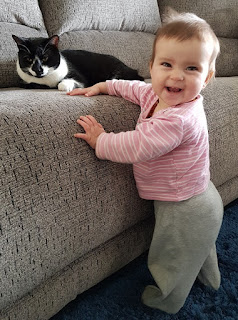 Anastasia getting more time practicing standing. The cat is wonderful motivation to stand here. She loves playing with him. Just look at that happy face. 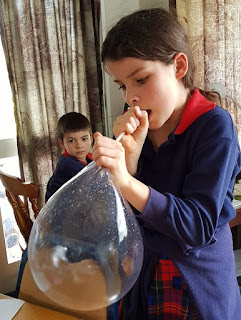 The book club order arrived today and Hannah had ordered a book that came with "putty". It's like slime, but specifically gave the idea of blowing bubbles in it with a straw. What a big bubble. Thankfully it's got hardly any colouring in it. The previous slime that she had been playing with this week had so much colouring her hands would be stained after playing with it. And unfortunately the colouring had a negative affect on Hannah emotionally. So I was very pleased to see the enjoyment she could get with this one - with out the negative colouring. 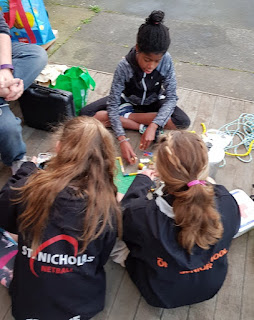 Ruth and I quickly headed off after school to get her to her camp assessment in town this afternoon. Anastasia obviously coming with. She had to put up a tent, a shelter and a clothes line. She had two girls with who helped. They will need to do their assessments soon too, so it helped them to know what would be involved.
She then had to talk to the assessor about running the camp kitchen, hygiene and food safety. She also had to show how she would set up her kitchen, so the leader had brought some lego for her to use to show her kitchen plan. 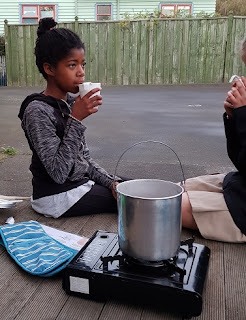 She also had to prepare some hot drinks, so the girls enjoyed some hot chocolate after the cold job of putting up the tents with the cold wind and drizzle about. 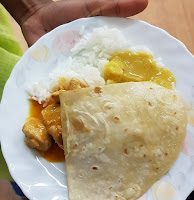 And the assessment was finished we headed over to visit another Guiding unit who were having a Sangam night. They did a whole range of activities relating to the Guiding centre in India. Including having some Indian food for dinner. 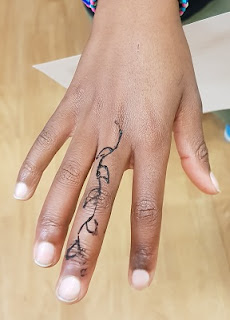 Getting some henna art on their hands. 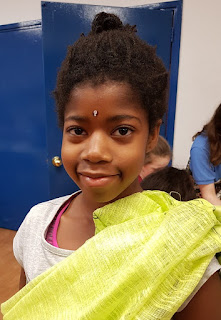 Although Ruth wasn't mad about the colour of the sari she got, I thought it looked amazing on her.
Some wali art and rangoli as well as learning to count in Hindu and fitting 16 girls in a car. :-) It was a great evening. And Ruth and I got to also enjoy listening to an audiobook while we drove. 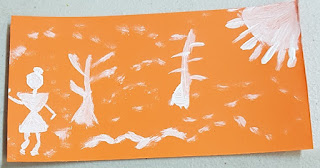 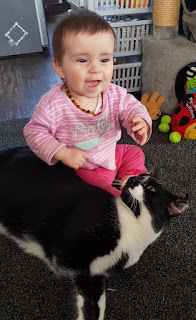 Friday 24th: I love how Anakin will come over to Anastasia for a rub. 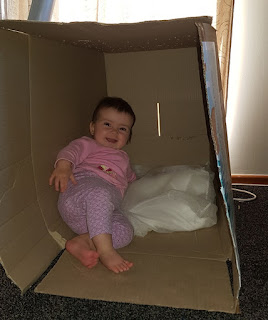 She loves going into his box too. Such a cutie.
Rachel headed off early this morning for a St John camp this weekend. It was a special one that she had applied to attend and was very pleased to be accepted. She first stopped at Mrs Sampson who had said she would help her alter some fancy dresses she got. She is planning on attending the home school formal later this year, and got two dresses at a ridiculously low price. They just needed some alterations and Mrs. Sampson did such an amazing job. They had a lovely visit over lunch too. What a blessing. 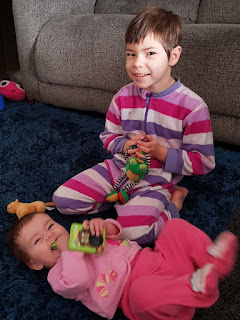 Saturday 25th: It was lovely to see Asher go over and sit next to Anastasia this morning. She is trying to interact with her more, which is so special to see. 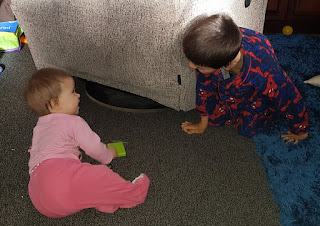 Hezekiah has enjoyed playing peek-a-boo with Anastasia around the rocking chair lately. It always makes me smile watching them and seeing her face light up ever time she sees him. 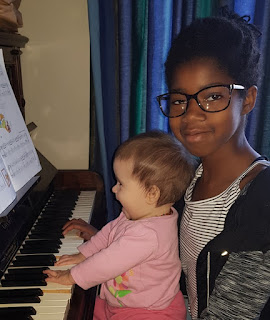 And Ruth giving Anastasia some time at the piano this morning too. What a busy morning she had with her siblings. So special.

Yesterday we had a delivery of new curtain rails (ones that help keep the rooms warmer) as well as new (curtain bank) curtains for the lounge. We so very spoilt. Our previous curtains had gotten damaged during the earth quake repairs, so it was so nice to get these. Ruth and I headed into town this morning as I had a sore tooth that I wanted to get checked. Thankfully it was only sensitivity and the tooth is fine. It gave us an opportunity to get some shopping done though. So we bought the curtain tie and we got that up this afternoon. 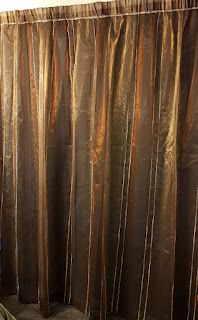 Rachel will have a lovely surprise when she gets home tomorrow. They look so nice. The lady had said she had some chocolate brown material and we said that would be fine. This was so much better than expected. At night they have so many different colours and are just lovely. I don't think I have ever seen curtains as nice. Both Brendon and Ruth made the comment that it made the room look so cosy.
And the extra trip also allowed Ruth and I to listen more to the audio book story. It's been nice to listen with her. We will have to continue listening on our own now though, as I don't think we will get enough time on our own to get it finished. And it's a detective story, so I am keen to find out what happens (and who did it).

Sunday 26th: Brendon preached this morning and we had the treat of fish and chips for lunch afterwards. Brendon is on new medication for his migraines and after 2 weeks without migraines we decided to give fish a try and see if he can manage some now without a headache. He has been avoiding fish for a number of weeks now as it did seem to be something he was not able to have without a headache afterwards. Thankfully no headache today (or on Monday morning). So that was a great blessing too. 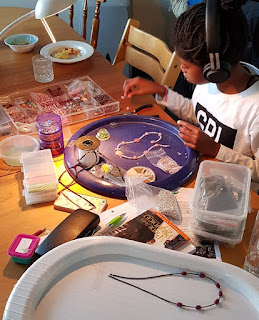 Ruth finally got around to taking some pictures of some of her jewellery creations for me to list on a local facebook site. She is going to sell them as fundraising for a school camp in November. She sold 4 items and so was very motivated to get a lot more made. The advert also brought her attention to a market that is happening next Sunday, so she wants to get as much made this week to sell next weekend.
She is listening to music on her new blue tooth ear phones. These were part of her purchases yesterday with the voucher she won at the speech competition.
Posted by Buckland at 10:00 PM