For those of you following a link to this page you may want to read about our long weekend first. :-)
By 5:30 this morning the contractions were coming 5 minutes apart again and I decided to get into the pool. We were not sure at this stage if they would fade off again or really pick up but decided that if things did not pick up over the next few hours we would probably head into town - so why not use the pool. By 6 the contractions were just 3 minutes apart and I finally had some pain in my back. Amazingly this made me feel wonderful as we had been waiting for baby to engage and with back pain starting it gave us the hope that he was actually starting to move down. By 6:20 we felt sure things were a go and so Brendon called Maureen. He then woke Rachel up so that she could help with topping up the pool and giving us things to eat and drink as by this stage I needed Brendon in the pool with me.
Maureen arrived at 7:45 (she comes from town so we knew it would take over an hour for her to get here) and I was so thankful to have her here. I was feeling rather tired by this stage and I told Maureen "I don't want to do this any more, it's so hard." By now the contractions were lasting over a minute and were coming every 2 or 3 minutes - so I felt like I did not get much of a break in between. I suggested we call Sarah so that she could bring the girls - Ruth really did not want to miss the birth. Maureen also called the 2nd midwife - Sandy (the idea is that the 2nd midwife be there for the actual birth - we waited too long with Hannah and she did not even make it). By 8:30 they had all arrived and Sandy could take over the note taking (I have full records of everything thanks to the lovely Maternity Notes book they use here). Josie also arrived at some point probably assuming baby had arrived and just wanting to help - so she was in the kitchen with Rachel - washing dishes and sweeping the floor. I remember so clearly feeling very overwhelmed and so Maureen said "ladies - we need to pray" and I had 4 Christian ladies in the room praying for me (the 2 midwives, Sarah and Josie) - what a blessing.
Sarah then took the younger girls upstairs and she told me afterwards that when I was quite loud they looked a bit concerned and so she said "isn't she doing so well, I was so much louder when I had my babies" and that totally relaxed them. What a blessing to know the younger girls were so relaxed through it all.

By 8:45 it was clear my body was starting to get ready to push him out and so Maureen encouraged me to put my hand down and feel my baby's head (as I remember both my midwives doing at the previous births). I got a bit of a shock though as it was not what I expected. I could feel his head but it was still a little way off and I felt something "in the way". I asked Maureen to do an internal so that I could understand what was going on. I had an anterior lip (where the front part of the cervix has not quite moved out the way yet). So Maureen said I needed to breath through the contractions and not allow my body to push. Wow! How do I do that!!!
The next 10 minutes were so hard but I felt so supported. Maureen was right in front of me and breathed through every contraction with me. I remember being so fixed on her eyes - it felt like I was hanging onto her for the strength and support I needed - and physically I was too as I remember squeezing her hand as I tried to focus on relaxing my cervix and not allowing the pushing that was so incredibly powerful. Brendon was also still helping as he supported me in the pool in all the different positions I tried.
Eventually at 9:05 I decided to get out of the pool so that I could get on my hands and knees and see if that would help keep baby in for a little longer. Just 4 minutes later I felt he was coming and was concerned about the lip and if it was out the way yet. Maureen said it must have been as baby was on his way. Afterwards we spoke about it and said it must have been the movement of getting out the pool that actually helped. Just 2 minutes later his head was out. Maureen got a bit of a surprise as the membranes were over his head. She managed to break them so that if he got a desire to take a breath there was nothing over his face. A minute later he was out. The cord was around his chest and had wrapped around his foot too and had pulled tight on his foot as he came out. Maureen quickly loosened it but it must have caused him a bit of stress as he passed some meconium.
So another very quick 2nd stage - just 7 minutes. The notes in my book say "The girls so excited baby is here. We have a baby brother." Something I will treasure for years to come is Hannah singing Hezekiah a lullaby just minutes after his birth. What a blessing.

Brendon then put a hat on Hezekiah and used some dental floss to tie the cord (much easier to put a nappy on without the bulky plastic clamp) and cut the cord. Hezekiah then started nursing and latched so well with strong sucking. He had a good long time at the breast - changing sides every now and again just as Hannah did.

During this time Maureen checked the placenta. She knew from last time that I was keen to have a look myself so she set herself up in front of me and we all watched. Another precious memory will be asking Hannah 5 days later what she remembered about his birth and she said it was "seeing his house". She knew about the placenta and cord and it was obviously a wonderful highlight for her to actually get to see it. And I love how she called it his "house". 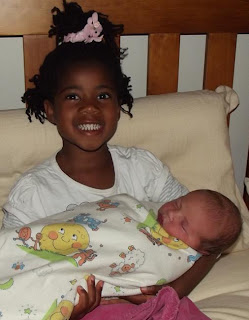 Brendon then got busy emptying the pool and packing that away (with Maureen and Rachel helping). Sarah had taken the younger girls to spend the day with her. By midday the rest of us were enjoying some toast and the note in the book says "Hezekiah having his first cry. Didn't enjoy being changed from one side to the other!" So he nursed for around 3 hours before finally being weighed and checked.
I remember Maureen asking us how much we thought he weighed. I said 3,5kg as that was what Hannah was and he seemed similar. Brendon said 4kg as he was sure I was way bigger in the pregnancy. Maureen said 3,7 or 3,8 and he was 3,73kg. Spot on. :-)
Maureen left just before 2pm. She stays the extra few hours just to make sure that everything is going as expected with Mother and Baby. She was again such a blessing to me through this whole pregnancy and I really thank the Lord for her. 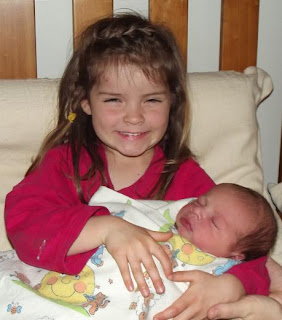 Just after 3pm Kerry dropped in with a meal and a smile and to take Rachel to Guides. It was lovely to see her and it was also nice that Rachel did not miss out. Thankfully she was not up earlier than normal and was not too tired to go. Rachel was such a blessing to us especially during the hours before Maureen arrived. It was lovely having her at the birth and she was thrilled to be a part of it all.
By 4 the younger girls were back and Ruth was thrilled to get her first cuddle with her new born brother. She had said before the birth that she hoped he was not born at night as she did not want to miss the birth. I am so glad my younger girls could be cared for so wonderfully (on Sunday and Monday - thank you Sarah) but also get to be home for the birth and also enjoy this special time with him on his very first day.
Above all I want to thank the Lord for all these many blessings. A couple of days after the birth a friend asked me what Hezekiah's name meant. As the meaning of names has never really been the focus for Brendon and I it was something I had to then go and look up. I was in tears as I read "The Lord strengthens". What a perfect name for this little one - the Lord really did give me the strength for his birth. We pray too that the Lord would strengthen Hezekiah and work in his heart so that he may "Trust in the Lord" and "cling to the Lord" and "not depart from following Him" (2 Kings 18:5-6).
Posted by Buckland at 7:00 PM