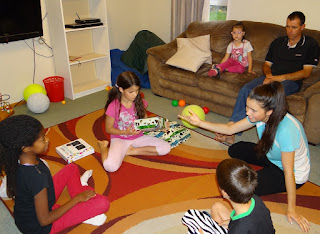 As soon as breakfast was done it was time for presents. Hannah actual birthday Hannah. :-)
I then took Ruth up to the hall to drop off all her entries for the show. By the time we left it had gotten so much colder. I wasn't sure it was worth heading up with Asher. Thankfully it only drizzled for a short time and then was mostly dry.
First we went through the school art display (photos in this post) as they were still putting things together for the rides. 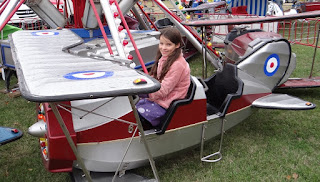 The planes were set up, so Hannah and Hezekiah headed off there first. 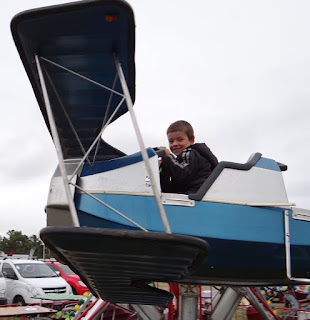 The children have been saving their pocket money for many months in anticipation of today. It works really well with them having their own money to spend. They have to think wisely about what they are going to use it on. Hezekiah and Hannah both had $17. Hezekiah ended up needing an extra $2 to get the hot chips he wanted, so Rachel helped him out (we only heard about this when we got home). It's so expensive though. Even with Rachel's help, he only got to go on the planes, the jumping castle / slide, the Ferris Wheel and get his hot chips. I think he will be saving up for longer in anticipation for next year's show. :-) 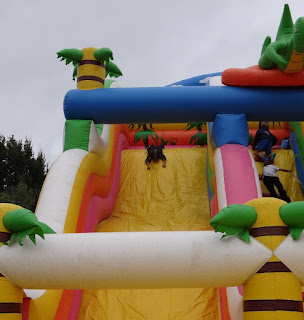 Hezekiah having so much fun on the huge "jumping castle" slide. He went on this last year too. It's great for the boys especially. They have so much fun together and get out some of that extra energy. 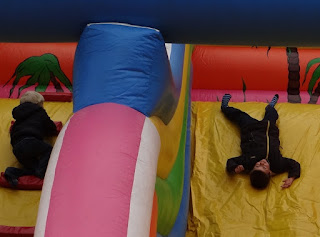 A younger boy spotted Hezekiah and so was pleased to be able to go on with him.  Hezekiah even going head first on his back. He enjoyed it all so much. And half of his enjoyment was knowing that we were standing there watching him do some of his tricks (and getting me to take photos). Such lovely fun memories made today. 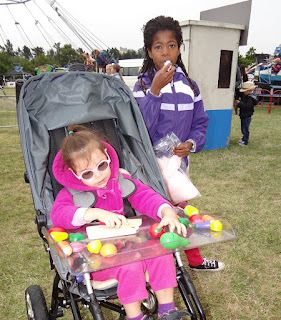 I wasn't sure how Asher would cope as she doesn't like being in her pram if it's not moving. (And if she was out the pram she would just be running.) The only other option is to have her tray with activities. So I brought a few with. It was drizzling slightly at this point, so these toys could at least cope. The drizzle stopped thankfully, so she could have a bit of time with her Dora cards and books too.
When we were facing the other way, watching the planes, she was watching those swings (behind her in this photo) and she kept saying "wow", "wow". It was so cute. I'm glad she enjoyed just watching and didn't have the idea in her head to get on it herself. 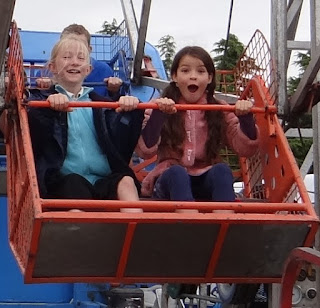 And then finally Ferris Wheel time. It was lovely that Katie was around as she offered to go on with Hannah. It's always so much more fun with friends. 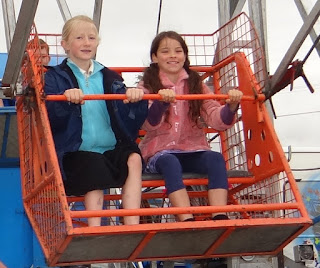 Finally got a "cheese" (without a pole in front of her face). 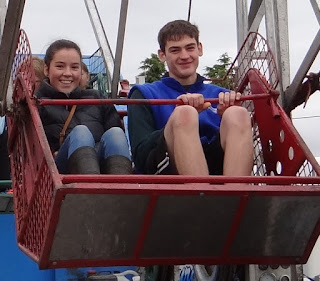 Daniel had never been on a Ferris Wheel, so these two had a ride as well. 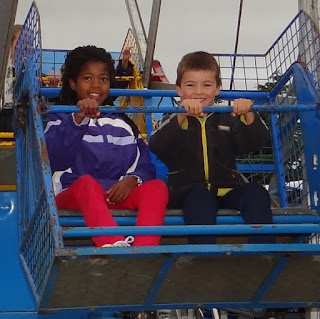 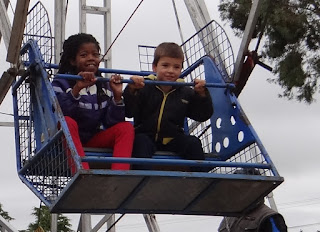 It was a little bit frustrating for her though, as he didn't want the chair to be rocked. Hannah did well and was rocking away this year. Perhaps next year Hezekiah will get into the rocking too. :-)
Brendon and I then left with the youngest two so that I could put lunch in the oven and get the rice on. Once that was done, I went back up with Hezekiah.

We found Ruth and as we were heading to get photos of all their entries, we got to have a look inside the limousine. 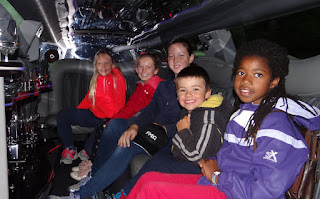 So fancy with lights flashing and music playing. Hezekiah especially loved that no one could see in, but he could see out. :-) 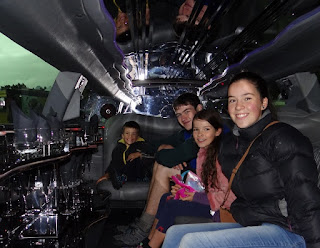 We then found Hannah, Rachel and Daniel, so we got another sit in the limousine to show them. :-)
By this point Ruth had gone off with her friends. I wasn't worried as she had her cell phone and I had said we would meet at the car at 12:30. Rachel didn't have her phone, so when the 5 of us were together, we decided to head home a bit early (at about 12:15). Only when we got home did I realize that Ruth wasn't with us. So I got teased a bit and immediately turned around to fetch her. We had only just missed her as she was already at the gate. So if we had been on time, it would have worked out perfectly. :-) Well done Ruth for being so reliable. 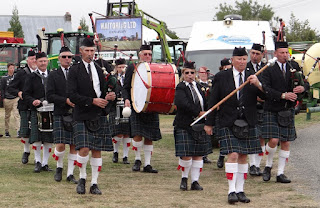 After lunch I headed back up with the older 3 while Brendon stayed at home with the younger 3. Hannah had thankfully gotten to see the band this morning, but I missed getting a nice picture. So I was pleased to be able to get a good one this afternoon.
We watched the grand parade together and then Ruth had fun collecting lollies in the lolly scramble (that she then gave away). 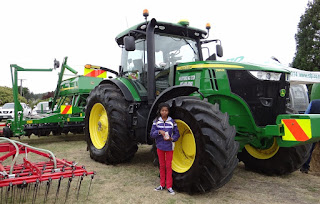 This was the big tractor that the children got to try and name. The winning child got to ride in it during the parade.
Then we wandered around and waited for the Youth Challenge. All those photos in their own post here.
All in all a lovely day with lots of fun memories.
Posted by Buckland at 7:00 PM