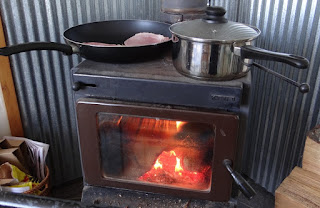 Tuesday 9th: We had to be a bit creative today with food prep as the electricity was out from 8:30 to 4:30. At least we did get amble warning that they would be working today. I was very grateful for the log burner that allowed us hot food for lunch. It does make me feel for the people in South Africa who can regularly have power out - with NO warning. 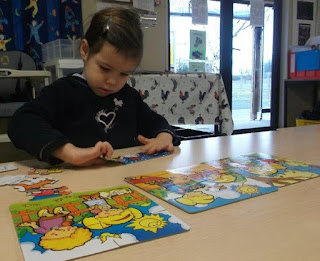 Often there are puzzles on the tables when the children arrive at preschool. Asher started playing with some this morning and so I encouraged her to give these a try. In the past she would not even want to look at puzzles that didn't have a border - so I was thrilled when she got into it. 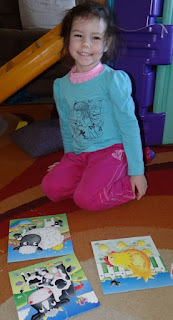 I was especially glad Asher could have the 3 hours at preschool this morning (with us not having power at home). She is getting better with playing without background music on - but it was hard for her this afternoon. She just kept asking for a DVD to be put in and we just kept having to say "it's not working" which she does not understand.
It was lovely to have her building these puzzles at home today too. It's a huge breakthrough for her. 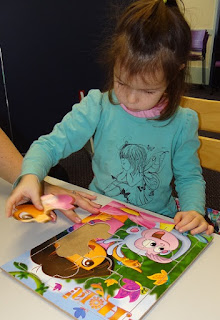 Wednesday 10th: We had Michelle and Seth join us for breakfast this morning on their way back home. It was a very short visit as they had a ferry to catch and we all had places to be. I left by 8 with Asher for Champion Centre and they gave the girls a lift to school a little later. Even though such a short visit, it was good to get that little bit of time together and they were especially loved by Asher who gave them loads of attention before we left.
It was wonderful to have the Champion Centre pick up on Asher's love for Dora (and her new puzzle building ability). Jackie had this puzzle for her today which she enjoyed. I can see she will get really good at puzzle building. 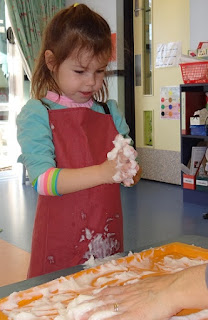 Asher enjoyed music but got a bit frustrated during her time with the Speech Therapist. So it was nice that she got some fun squishing activities in after that to help try calm her down. Unfortunately she quickly started flicking this corn starch mix and it was ending up all over the floor. So it didn't last long. :-) 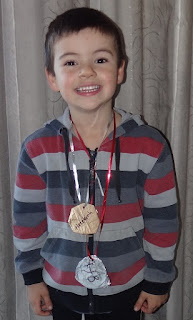 Hezekiah came home with Olympic Medals today. They had fun making those today and it was nice that he wanted to give them to different people in the family. It was also nice that he could tell the teachers a bit about what he knew about the Olympics. Such a fun time and great that the preschool picks up on what is happening in the daily lives of the children and uses the opportunities to teach and have fun. 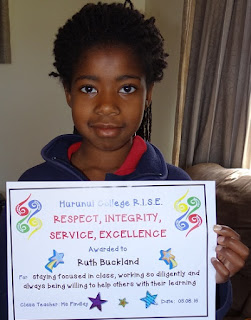 Thursday 11th: Hezekiah and I started with coughs today. It was the start of what ended up over a week of illness for him and Asher.
Friday 12th: Ruth came home with a certificate today. Well done Ruth. They had planned an assembly for last week Friday (which I would have attended) but then school was closed because of the snow. So again - I missed taking a photo at assembly of it being awarded. I am yet to get a picture of the girls receiving one. :-)
Saturday 13th ended up a really rough day for Asher. It started at 5am with a 1 minute Tonic Clonic. Then at 6:30 she had another Tonic Clonic, this time 1 1/2 minutes. We didn't wait till 7am to give her morning meds but just gave them now. Only after this second seizure did she start coughing - so I knew it was illness that was causing these. It's always a worry in times like this that she will end up with a really big cluster. 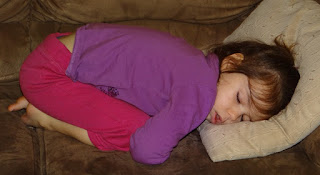 So I called the hospital to ask if we could give her extra of the one medication to try and stop a big cluster. The neurologist on duty called her neurologist and they let me know that I could give her a double dose morning and night for a maximum of 3 days.
Just before midday she had a 1 min Toni Clonic (not long before needing her next dose of meds). And then again at 6pm (just an hour and a bit before her evening dose) she had another 1 minute Tonic Clonic. 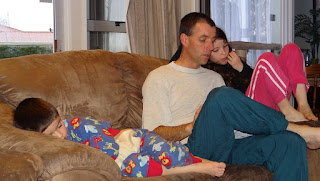 By this stage she had a fever and so we were really thankful that she didn't have more seizure through the night. With her fever still there in the morning we gave her a double dose again on Sunday morning - but that was the last "extra" as it was really effecting her so much. She was so unsteady on her feed and very tired. Thankfully the seizures stopped. It's again a hard call to know when extra medication is going to be worth the side effects that they bring.
Hezekiah spend the day sleeping on Saturday. He had a fever too and was complaining of a sore tummy. Thankfully a warm bean bag helped ease that pain. It's always a tricky when there is a fever and pain. I was pleased I could help ease the pain but still allow his fever to do it's job. 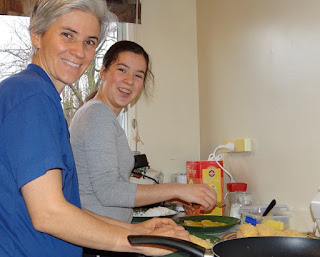 Hannah has not liked fish since we stopped buying crumbed fish (when we went off gluten) but I have finally started crumbing fish myself (with our own gluten free bread crumbs). Everyone expect Hezekiah just loves the crumbed fish - so Rachel and I are kept busy regularly crumbing fish for the family. 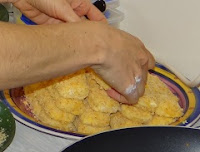 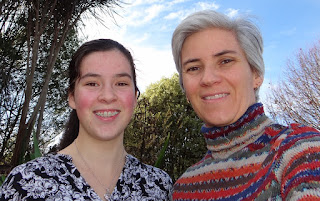 The last batch was so successful that instead of making just 12 pieces today, we got 18 done. That meant enough for tonight as well as for tomorrow.
Sunday 14th: Rachel had a ballet exam practice at the exam venue this morning. We had thought about going into town in two cars again and meeting at church, but as Asher and Hezekiah were still sick, it was only Rachel and I that headed out.
I couldn't watch while she was doing the practice, so I got some shopping done while I waited. She had a great session on her pointe shoes (doing all 3 dances) and it was a great boost to her confidence. Her exam is finally set for Sunday 28th - just 2 weeks away. 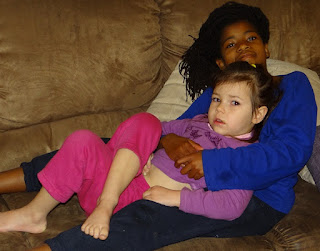 Asher is extra cuddly when she is unwell, so Ruth enjoyed the extra cuddles today.
Posted by Buckland at 10:00 PM