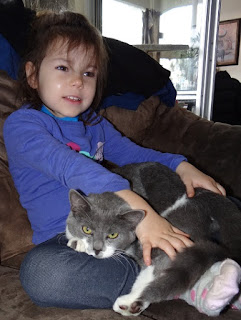 Monday 23rd. Asher had such a fun time at preschool today. The reports that Lynda draws up each week are great because they help me to feel a part of her mornings. They have helped the grandmothers feel closer to her too, which is wonderful.
A note on those: I have decided to rather delete the reports that I posted on the blog and e-mail them directly to the grandmothers in future.

Asher was totally played out when she got home. She immediately put one of her music dvds on and sat down to watch. It's not often that she will just sit. :-) So she had a little cuddle time with Little Miss. 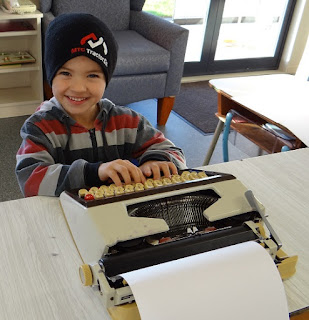 Tuesday 24th: The plan is for Asher to start attending the preschool on a Tuesday as well from June. Hezekiah will then also attend on Tuesday. He was so excited about that though, that he didn't want to wait a couple of weeks. I called the teacher and she said it was fine for him to come today already. So I remembered to bring my camera with to take a photo of him at the typewriter. He had so much fun with it on Monday. And I was really impressed that he knew where the paper went and where the little bar was to hold the paper down. So much fun. Unfortunately the ribbon is a bit twisted, so it's not working. It's still so much fun for the children to look for all the letters in their name. 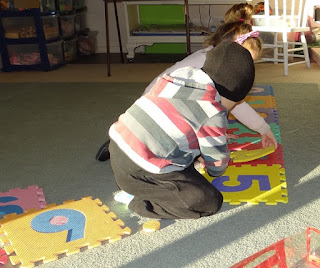 Hezekiah found these number foam mats and he and a friend started putting them together. I hung around a bit and got this nice photo of them working together. It was so nice hearing Hezekiah say "you do that one and I will do the next one".

I took this photo this morning. We can all feel the cold from that snow. Winter has finally arrived. 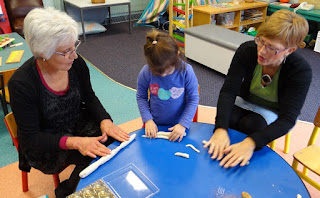 Wednesday 25th: It was nice to have Lynda join us at the Champion Centre today. It was sweet to hear Asher start singing "rolling, rolling" as she had done with Lynda on Monday. 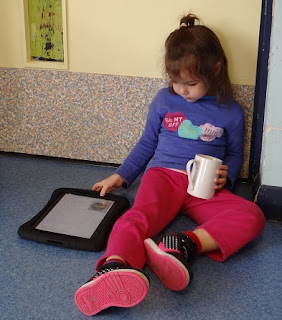 Asher was in a bit unsettled today. During morning tea time she just kept wanting to go into the room next door (where she has sessions with Mariana and Jackie and where we have group music at the end of the morning). Eventually I got the iPad out the car and she sat listening to 10,000 reasons while she had some of the hot carob drink that I had brought with for us.
She was very pleased when she was finally allowed into that room and had her best session of the day, playing with Mariana and Jackie together today. Group music also went well.

I didn't have much time after we got home before I headed out to the cross country. Thankfully Asher was in bed and Rachel was home to watch her. I was glad I could enjoy the afternoon with Hannah and Ruth.

Getting ready to start. 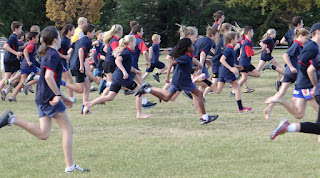 They headed off at such a pace. I was pleased that I managed to get this photo of Ruth. 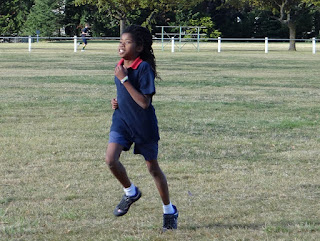 She wasn't looking forward to today. So she was glad when it was over. She did well and came in at 121, ahead of a number of much older children. Her goal for today was to just not be the last in her class. So she was pleased that she accomplished that goal (and not bad as she is the youngest in her class). 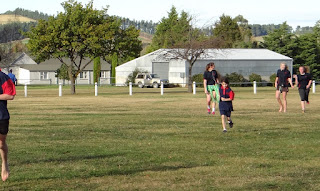 Hannah came in not long after at 128. You can see there are a few bigger girls behind her.
She was a bit nervous before they started as she was worried about slipping on mud when they went up the hill. So I was pleased that she had the courage to do it. One of her friends kindly encouraged her and said she would run with her. 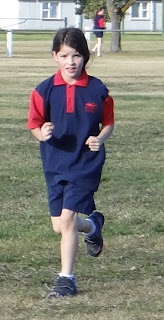 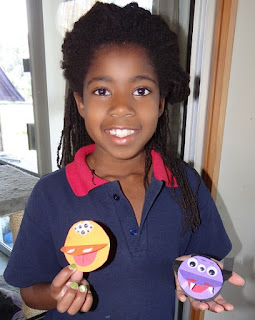 Thursday 26th: It was an emotional afternoon for me today as I dropped Shadow off with her previous owner. On Tuesday night she got out again and killed someone's chook. We can't afford to re-do our entire property fencing, so this was our only option. Although it was very emotional, it was also a great comfort knowing that Jess was thrilled to have Shadow back home. 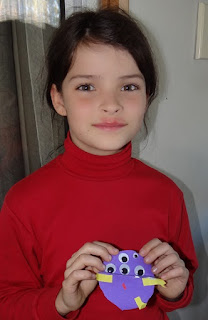 For those wondering about the "epilepsy assist dog" side of things, it wasn't really working. Shadow would need intensive training which I don't have the time for, and she would also need to be around Asher all the time. With Champion Centre, Church and now preschool 2 mornings a week, Shadow was spending less and less time around Asher. So she couldn't really build up that relationship. Of the last 9 seizures, 4 of them have been while we are away from home. I am really glad we tried though. We have learnt a lot and we have all enjoyed having Shadow be a part of our family for the last 8 1/2 months. 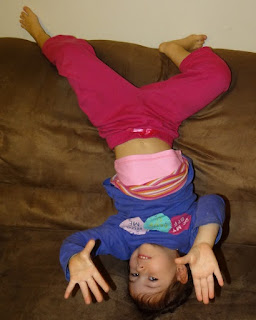 Friday 27th: Some monster creations that the girls brought home today. :-)
And Asher enjoying some time upside down. she is getting really good at supported head stands. :-)

Saturday 28th: Ruth enjoying some creative packing after washing these. 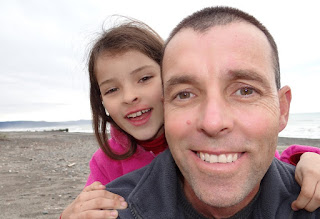 Brendon and Hannah headed out to fetch a chest of draws that I got at a great price. They were in Leithfield beach, so they decided to stop in at the beach. Hannah was disappointed at how stony it was, so they didn't stay long. It was pouring with rain by the time they got home, so we had to dry off the wood quickly. It has been such a blessing to finally get some rain. 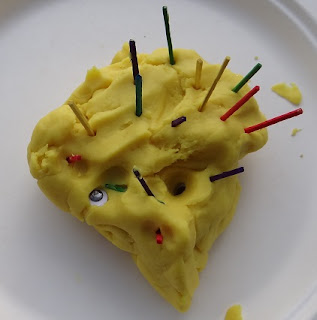 Sunday 29th: Asher was more unsettled at church this morning. She didn't even want to look at some of the special toys I offered her. So she went out with Brendon a bit early than normal. the strange thing was though, that she kept wanting to come back to me. So she was a bit mover disruptive than normal. The service ended a bit early and I knew that Hezekiah's class had playdough. So I then took her up (they were still busy). She had so much fun. She really puts so much effort into squashing the dough. she enjoyed decorating it with the eyes and sticks too.
As this would be the class that Asher would attend if she was able, it was nice that the teachers all knew her name and invited her to join in as soon as we entered. 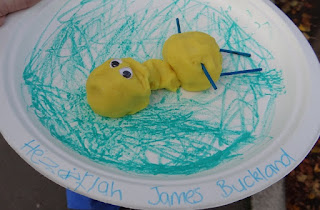 This was Hezekiah's creation. :-)
Hannah didn't have a great morning either. During Sunday school she got a terribly sore ear. We phoned the health line for advice and they suggested we see a doc before heading home. So we had quite a delay before heading home and so didn't stop at any park this week. Thankfully the ear pain cleared up really quickly and I only ended up giving her one dose of the ear drops (and one dose of pain medication). 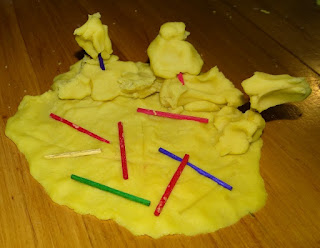 Ruth and Hannah enjoyed playing with the play dough at home. 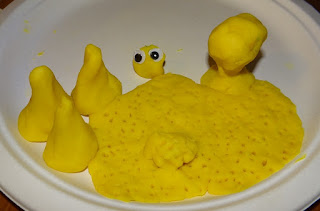