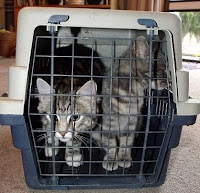 The poor kittens could not have anything to eat after 6pm last night as they are going in to be fixed this morning. We locked them in the garage so that they could not hunt and when we let them in this morning I thought they would make it really hard for us. But after meowing and asking for food (which they did not get) they settled down and just played around. They were actually much more playful than normal. Tiger walked into the cat box as soon as I put it down and Smokey was on her way - so I put her in and off we went. We dropped them off at 8:30 and will fetch them after the girls nap this afternoon. Hannah was asking for Tiger the whole way home. 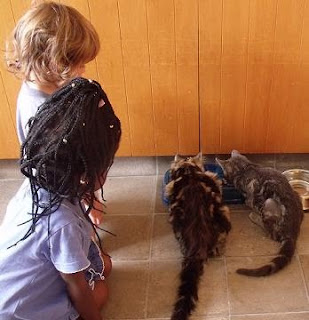 It was great to see them eating and although tired they were not sleeping the whole afternoon - just lying quietly and going for food regularly. It was really strange this morning coming home and they were not here. So we are all very glad to have them home.

On our way home we dropped Rachel off at Ballet which started up today. She is so pleased it has finally started up for the year. 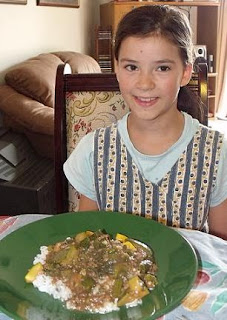 Rachel made dinner today. Mince with vegetables from the garden. We had a big yellow marrow and a HUGE green marrow along with loads of celery. Good job Rachel. It tasted good (even though you did not like the veggies all that much).
Posted by Buckland at 3:41 PM