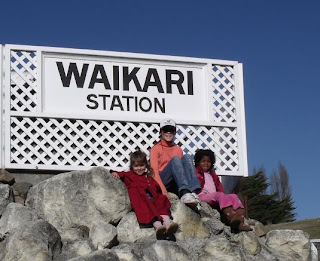 The train was running again today so we kept an eye on the weather through the morning and decided to give it a go. The girls were SO excited to be going on a train.
Normally people travel from Waipra to Waikari and back but as Waikari is on our side we did the trip the other way around. Thankfully it does the trip twice - so we just did the middle two legs.
(I took this photo when we got back to Waikari at 3pm. You can see what a beautiful day it ended up being.) 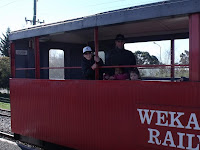 The train left around 1pm and we managed to get space in the open carriage at the back. 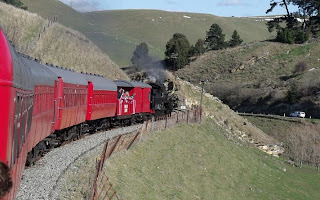 We are normally in the car waving to the train - so it was nice to experience it from the other side - having all the cars that go past hoot their horns and wave. 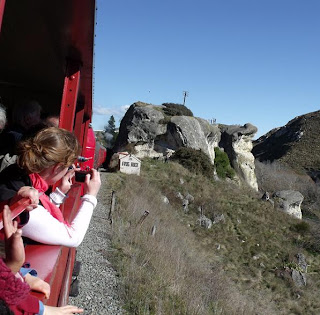 It was so nice to see Frog Rock from this perspective. Frog Rock is one of the rock formations through the Weka Pass. We walked up Frog Rock in November last year when the Campbells' visited. So we knew what it was like for all the people standing on the top waving from there. 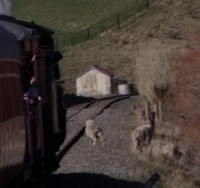 We even had some "traffic" on the line at one point. Brendon always laughs about our "traffic jams" in the country. It has never got anything to do with cars.

The girls got very excited when they saw this water. At this point (getting close to Waipra) the railway has moved away from the highway and so this is something we have never even known was here. 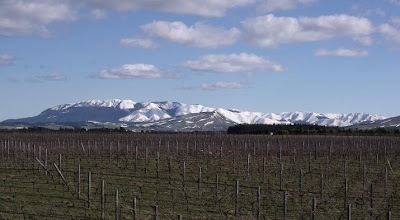 The view of the snow capped mountains was just beautiful.

We then arrived at Waipra Station and bought our tickets (no efpos in Waikari) and watched how they turn the engine around and fill up the water tank. This obviously stimulated the discussion on how a steam train actually works.
It was a surprise to see how easily they just pushed the engine around. 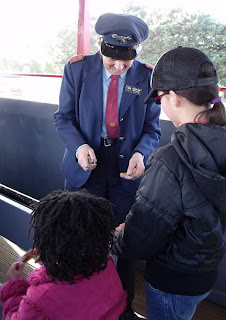 On the way back the girls had the fun of getting their tickets checked and punched.

The train was far less busy on this trip so we got to move around quite a bit. We started off in the same carriage which was now right up front - just behind the engine. As expected the sound was too much for Hannah - but at least they got to experience it.
So we headed inside and the girls felt so fancy sitting in this soft seats. 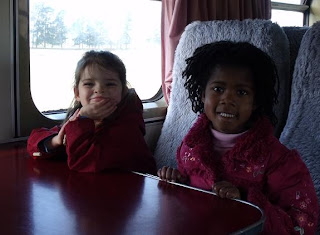 Ruth asked why there were tables and so we chatted about how people used to travel on trains and there would be a kitchen carriage and people would have meals on the train when they had a long way to go.
﻿
﻿I could tell her about my train trip to Bloemfontein when I was a child and how we traveled at night and had beds.

I just love the way natural curiosity in children allows them to learn so much. 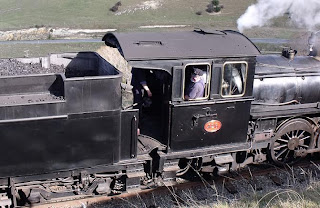 We knew that the trip back was a little bit longer and I just assumed it was because it was more uphill. It was however because at one point on the way back they let us all get out the train. It was nice to get this high view of the engine and watch them putting coal in the fire. 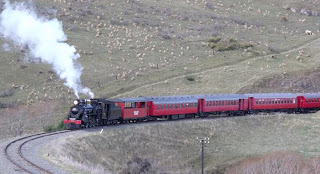 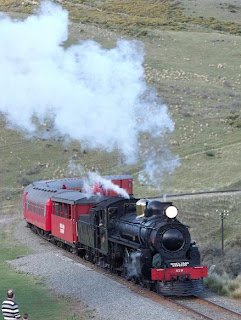 Then the trained backed up behind the hill and with cameras all ready it came around the corner.
A lovely photo opportunity. Especially with them really putting on a show with the steam.
And a lovely video opportunity too with them blowing the horn especially for us. Again it was a little loud for Hannah but with fingers in ears she enjoyed it too. She has loved copying the train noises today. 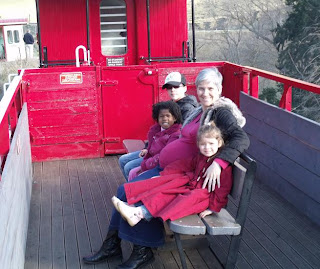 The girls had had enough of being indoors by now and so they asked to go on the really open carriage which was now at the back (with just a little storage carriage behind us). On our first trip this had been the girls first choice but it was so full (and would have been too close to the engine for Hannah). Now we had it almost all to ourselves. The sides were also a little lower than our first carriage so the younger girls could move around and see out from anywhere. 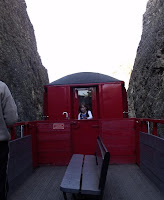 On the first trip the wall was a bit higher and so the only way they could see out was by standing on the one step. We were thankful they had been able to stand on the step but this was way more fun.
There are some areas where the rocks have been cut away for the railway and the rocky walls on either side are really high.
We had such a lovely afternoon and I thank the Lord for the opportunity, the beauty of His creation that we got to enjoy and the fun (and education) time the girls had.
Posted by Buckland at 9:01 PM