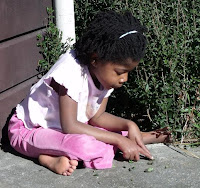 Maureen came for my 24 week check last Monday morning. Hannah spent almost the whole time playing Preschool Jumpstart. At first I had thought it would be too hard for her but she is loving it. Ruth spent most of the time playing on her own outside. It was lovely and warm and so good for her to get some nice morning sun on her skin. So I had a lovely quiet visit with Maureen for a change. :-) 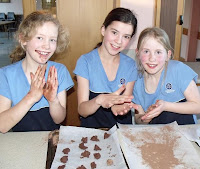 On Monday afternoon I took the girls to Guides. It's nice that Hayley is now old enough to join Rachel and Grace. The three of them get along really well together. 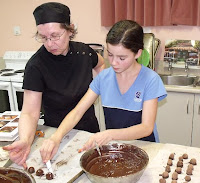 Today was an extra special day as they learnt about (and worked with) chocolate. For all the details check out Rachel's blog post. I think Rachel got to do the most amount of work with the chocolate as the other 6 girls seemed to get tired quite quickly (perhaps from being at school till 3pm). Rachel was also the only one not to over-eat.
She enjoyed the chocolate just as much as the others but has obviously learnt her lesson really well about sore tummy after over-indulging and so I was really proud of her for her self control. 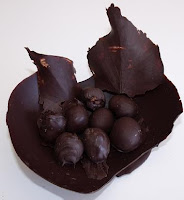 This was her finished work. A chocolate bowl, truffles and chocolate leaves. And boy is it nice chocolate. I generally do not like dark chocolate at all but this imported Belgium chocolate is SOOOO good. The only problem is the price. Brendon said at least now they know what they can buy me for my birthday. Yes please. :-)
The plan was to be done by 8pm (we had fish and chips together for dinner) and so I had organized for the Spencer girls to sleep over at our place so that they did not have to be getting home at 9pm. Thankfully we finished a little earlier and so the girls had a little bit of time before bed. Thankfully they could just take a different school bus from the bottom of our drive. The girls were all so excited about their sleepover - on a school night too - even though they did not get to have all that much time together. Ruth stayed up until we were home and was up early as soon as the girls were up. So it was obviously a real highlight for her too. 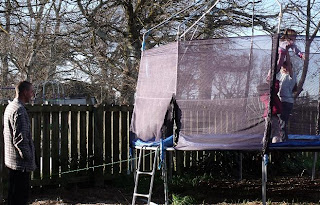 The girls have been enjoying making "shows" for us to watch on the tramp.

Even though
"Dancing on Ice" is finished now - I think it has made a real impression on them all. :-) 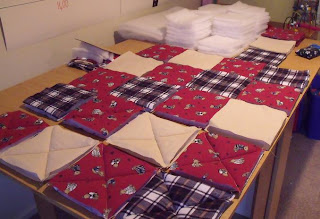 I finally realized I had to wash my flannel material before I could start on the guilt and so I got that done this week. On planning however I realized that I had almost enough to make a quilt for the cot as well as a single bed. So I called the material shop and they sent an extra meter of the material out to me. I was amazed when it arrived the very next day!!! By Thursday I had already started quilting some of the blocks. It's quite exciting to see the teddy material finally being used after over 5 years in my sewing cabinet. 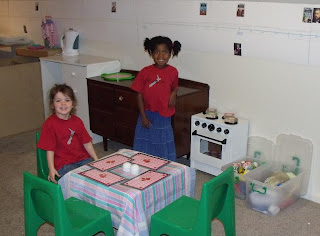 The weather this week has been lovely and warm. The girls have either worn short sleeve tops or summer dresses. I had to even find some summer maternity tops as it was just too hot. For three days I got "wow - that's a nice top". They have gotten to know my winter ones so well that it was obviously quite a shock to see me in something different.
We moved things around in the playroom on Thursday as they are using the two chest of draws as cooking benches. So at least all their kitchen things can now be over to one side of the room. The girls have been having SO much fun having tea parties and making meals for one another.

When Brendon did some shopping for me last week I had asked him to get buttermilk. He bought a 1 leter though as that was all they had. So with my rusk recipe only needing 500ml I decided to just make two batches. At least I know we will have stock that will last till after the baby is born.
With the first batch I tried something different - I added a cup of chopped nuts. I had bought 3kg of Brazil and hazelnuts and am always looking for ways of getting them into things. Brendon was happy with the taste and so with the 2nd batch I used my food processor to chop up the nuts really finely and I added 2 cups (one of each). So even though these are pretty healthy rusks to start with - they have gotten even healthier.

Unfortunately the week did not end on a healthy note though. Poor Hannah got sick in bed early on Sunday morning. After cleaning her, the bed and the floor we got her back to bed with the bucket next to her. We ended up having to clean up a bit twice more before Brendon left for work and she got sick a couple more times through the morning but thankfully had figured out how to make sure she stayed over the bucket. It made me realize how thankful I need to be for my girls health. It was so hard seeing Hannah just feel so terrible today. She managed to nibble on a couple of wine biscuits (like SA Marie biscuits) through the day but did not eat anything else (although so much was offered). Rachel had a sore stomach in the morning but thankfully did not get sick and was feeling well enough by late afternoon to have a decent meal (although a small helping).
Even though Hannah got sick this morning (only just a little with a cough) she was so much better and I was so thankful to hear her voice and see her playing. What a blessing to hear her ask for breakfast as soon as she woke up. Rachel was also almost back to 100% (just getting a sore stomach if she walked around too much). So no Guides this afternoon - just in case there are still some bugs around. Just a quite day at home for us all. I am very thankful no one else has gotten sick and that Hannah recovered so quickly.
Posted by Buckland at 9:00 PM