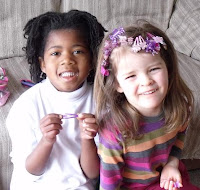 On Tuesday night Brendon said he felt like he might be getting sick. On Wednesday morning he knew he was. He let the farm know he would be staying home and spent the day sleeping and just resting - trying to get well before it became a full blown flu.
The girls were really good about leaving him to rest and understanding that it was not just a holiday for him. Ruth was Hannah's hair dresser for quite some time. They had so much fun. 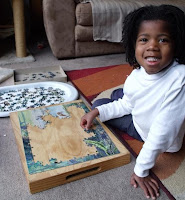 On Thursday Brendon was not feeling any better - probably worse actually - so spend another day getting some extra sleep and rest.
I had made a comment about how Hannah has really taken to building puzzles lately and so Ruth decided she wanted to build a puzzle again. She got this National Geographic 220 piece puzzle out again and enjoyed working on it today. 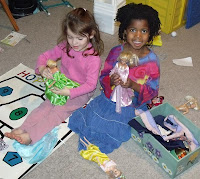 Brendon was back at work on Friday. It was a long day though and he was exhausted when he got home. He was probably pleased that Youth was cancelled tonight so that he did not have to do the traveling. The Spencer's have had so much snow this week that the girls have missed school the whole week and there is still so much around them that it was better to not have to travel.
Rachel has officially given her barbies to her sisters. They had so much fun with them today.

Saturday is always a day that sees Rachel doing a LOAD of reading. It was no different today. The only change this week though has been that when she has had time to do her own reading she has been reading a "school" book. Mao's Last Dancer. We watched the movie a while back and she is really enjoying the book - learning so much more about Li's childhood and what things were like for him growing up in China.

Saturday also saw us getting the cot down from the garage ceiling - cleaning it off and getting it set up. On Sunday we sorted the bedding. When we bought this cot off Trade Me soon after arriving in NZ it came with quite a bit of bedding. It was lovely to finally use the "boy" sheets. :-) I am 34 weeks now. Amazing to think this little one could be born at home within 3 weeks. Hopefully he stays put for at least 6 more though. 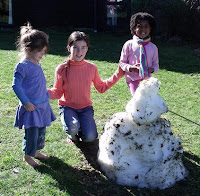 And for those who have been wondering how our snow man is doing.... On Sunday this was what was left of him. 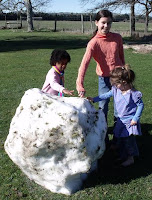 The snow ball is still really big - and cold.
After lunch we took the girls on the Weka Pass Train. There are over 40 photos to sort through though - so that will have to have it's own post.
Posted by Buckland at 9:00 PM