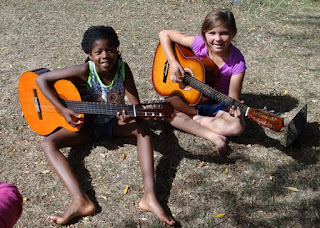 Saturday 4th March: Brooke came over for a visit again this morning and her and Ruth enjoyed some guitar practice together. 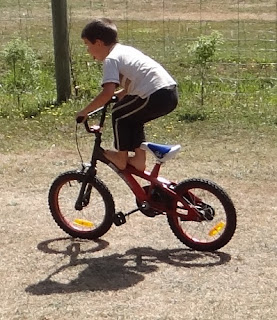 Hezekiah showing us the tricks he is already learning on his bike. 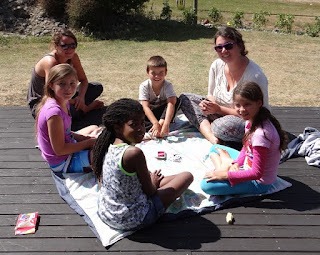 Vanille popped in for a visit today on her way up to the North Island. She has been working in the Mount Cook area for the last 3 months. It was great to catch up with her again. And to keep with tradition, she asked Hannah if she wanted to have a fame of Uno. :-) 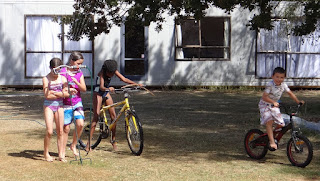 And then they enjoyed cooling off under the sprinkler.


Sunday 5th: Asher had a 1 minute Tonic Clonic during church this morning (at 11:15). She went very blue, so we were glad it was again a really short one. 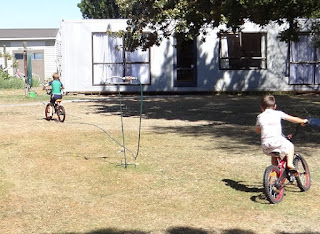 Hunter came over for a visit this afternoon. the sprinkler was a big hit again. 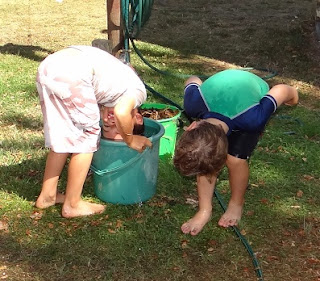 These two had so much fun. They had the sandpit open and buckets of water over making mud. Then they rinsed the mud off and enjoyed dunking their heads into the water. 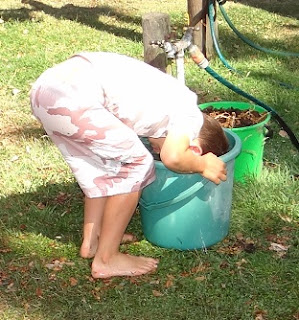 He even got his eyes under. Well done Hezekiah. 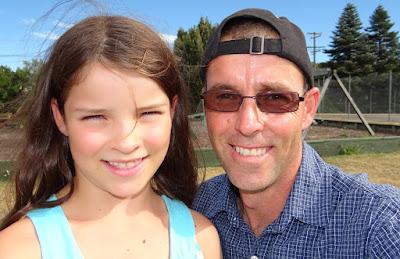 Brendon and Hannah managed to get some time at the park too this afternoon. The months have been so busy it's been a while since she has had some parent-child time. So it was good to finally get out together. 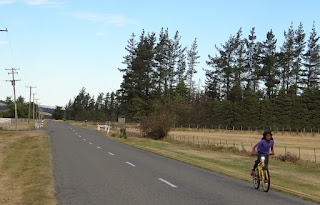 And then I took Ruth to measure out the 5km race she will be in on Tuesday. She is doing the bike ride for her triathlon team. I was so very glad we did this. On the way out, the 2.5km took her almost 15 minutes. I kept watching her having to stand and ride and kept thinking the bike was just not good enough. She only has use of the back cog as the front gear lever broke. We chatted about it before the return trip though, and I kept checking where her gears were and telling her to change more. She then managed to get them changing and it made such a difference. 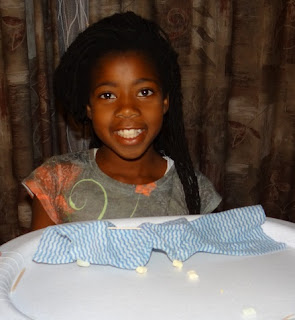 On the way back, even though it was more up hill, she only took 5 minutes. Well done Ruth.
And then this evening it was time for a Girl Guiding challenge again. She was the leader who could not use her hands, and we were her team, who could not see. So with us all "blind" she had to direct us to build a "shelter" out of some cloth, toothpicks and mini marshmallows. 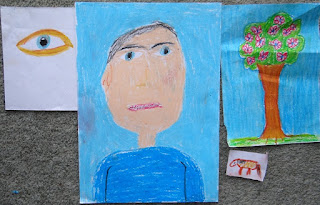 Ruth has also been busy with her oil pastels again this weekend. She got these pictures done. 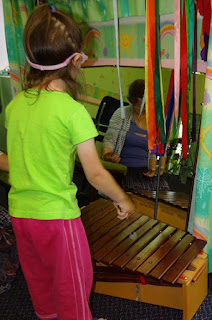 Tuesday 6th: Champion Center today, and thankfully a full session without any seizures. She had a fun time at music today and I just missed getting a nice photo of her climbing through that lovely big harp type instrument - and peeping through the hole at me. It will be my goal to try and get one another time. It was so cute.
Below: She had a great time playing with a ball and the frogs while I got to chat to her OT (and the team leader) about some of the questions I have about "school".
And then group music went so very well. I was amazed at how well she sat through the two very new songs. Hilary (the computer teacher) was there to take a video of them, so I could play that at home for Asher. It looks however, like we may not need it. She sat and looked around and listened. Not at all intimidated as she normally is. I really do wonder if sleeping through the songs last week really helped her to get to know them - even if that was subconsciously. 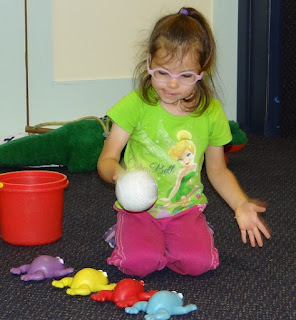 Then we did our monthly special library stop. And then it was to the hospital for a check-up with her neurologist. So a very busy day in town for us. It all went well though - especially the doctor's visit. I had her church bag of toys with and she just happily sat in the middle of the room and played as we talked.

It was a very wet day and I always feel bad about the children having to ride to school in the rain. Thankfully it wasn't raining too much when they left. It also helps that Hezekiah can ride now too, so Rachel doesn't have to walk up with him. 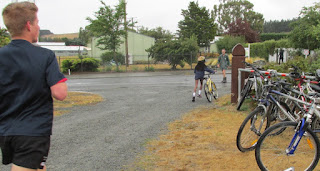 Rachel did walk up later today though, so that she could take some photos of Ruth in the triathlon. She did the cycling leg which was after the running. Their runner is her best friend Jess, who is really athletic and did really well. So it was a nice head start for Ruth. She felt the ride didn't go as well today as it did on Sunday. If I look at the times on the photos, she did it in about 15 minutes. So much better on the whole than Sunday, but I think she was hoping for 10. 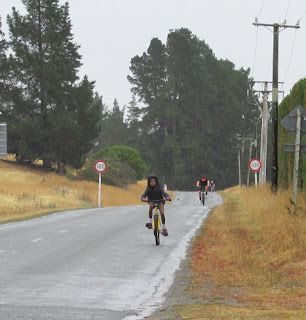 It wasn't the nicest weather though, and with the old bike that she has, I think she did amazingly well. It was so nice that they could get a team together and enjoy it together. Lovely memories made. 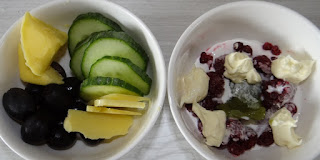 Wednesday 8th: A new meal for Asher today. I have started including kiwi crush into her diet as she never really likes having a huge bowl of berries for desert. The kiwis have a much higher carb value - so she doesn't have to eat as much - which she likes.
The cucumber has shown to be too much for her too. She would happily eat more of the fatty things, and just not bother with the carbs. We have to keep things exact though, so I'm working on making it all as palatable for her as possible (which for her means making the carb content as compact as possible). So this has worked well. And it's also great for her tummy. Many children on this diet are on laxatives on a DAILY basis. Asher has only had to have twice. And the 2nd time only half a dose. So I'm very thankful for this too.
Posted by Buckland at 10:00 PM