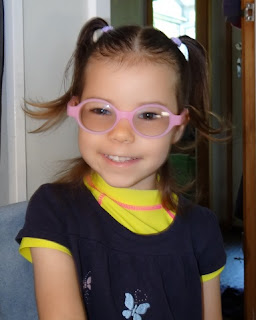 Monday 21st: I've had to do some experimenting with Asher's hair to see what works best with her glasses. This was cute.
At 12:30pm Asher had a 3 minute vacant. She was twisting her whole body to the right as she did when she first had the vacant seizures. Seeing it again made me realise she hasn't done it in a long time.
At 5:20pm she had a 1 minute Tonic Clonic.
Tuesday 22nd: I had a meeting at the school this morning and just as we were finishing as Rachel was heading to preschool to pick Asher up (11:30am), she had a 4 minute Tonic Clonic seizure. We were all so relieved when it stopped as we hate having to give her the extra medication if it gets to 5 minutes. Rachel was there by the time I arrived, so she could hold Asher while I drove us all home. Asher had a good sleep once we got home and was fine when she woke up.
She has had a rough time with seizures 5 days in a row now (with 2 on Sun and 2 on Mon). Thankfully she did have 4 days without any after this. 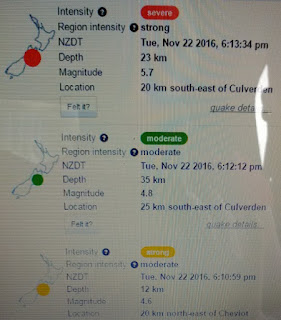 After dropping Rachel and Ruth at St John, I headed over to the library car park to get some work done on my laptop (free wifi even when the library is closed). Unfortunately I didn't get as much done as I would have liked. I took this photo from the laptop as I checked out the aftershocks that I had felt. 4.6 at 6:10, 4.8 at 6:12 and then 5.7 at 6:13. I felt the first one and opened the car door and got out. I had parked next to the building next door which has a huge brick wall. I did not feel too safe next to it.
I got back in the car but when the next one hit I was out and a couple of meters away very quickly. The guy parked in front of me had done the same thing. While out the car I checked and saw these estimations. With them South of Culverden they were even closer to us. I didn't bother trying to get any more work done and just headed over to the girls. 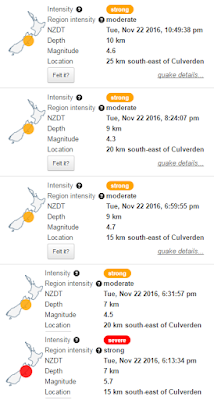 They had evacuated the building and continued with their meeting outside.
I had called Brendon soon after the bigger ones and asked how they all were. Hannah had been really upset again and Brendon said she had gone rather pale. We have some post trauma drops (made from 15 NZ flowers) and after giving her those he said she looked a lot better.
Unfortunately it was a rather active evening too (as seen from just these strong ones listed to the left) and so I didn't get too much sleep. Thankfully Hezekiah and Asher slept through it all. 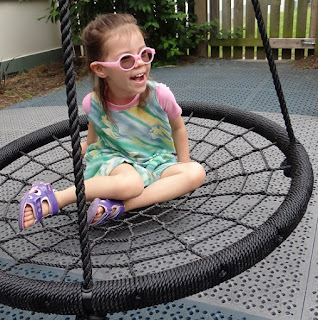 Wednesday 23rd: Champion Center again this morning. I love this one of Asher on the swing. She was in a bit of a giggly mood again. 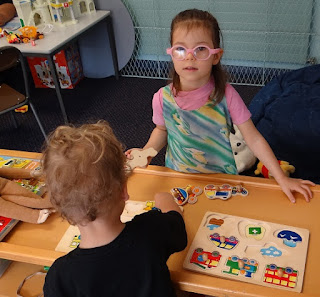 I was SO impressed with the improvement with Asher over the last weeks / months. 6 months ago, if someone would have started "interfering" with her puzzle building, she would have hit out at them. Now she sees it as playing with someone, and she is so tolerant of it. One of the twins came over and joined her puzzle building (she always likes having two puzzles going at the same time). The only time she even tried to touch a piece that he had, she was just turning it around so that it would go in. It was so encouraging to see and warms my heart just thinking about how much she has grown and adjusted. 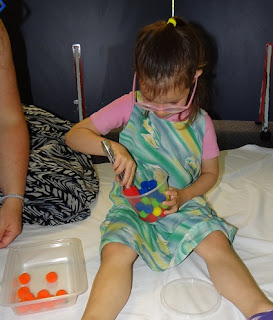 Jackie did something different today, and instead of sitting at a desk, we all sat on the floor. Asher was still a bit stressed at one point, so Jacke brought out the little balls. Asher was instantly calm and enjoyed sorting all the colours out. 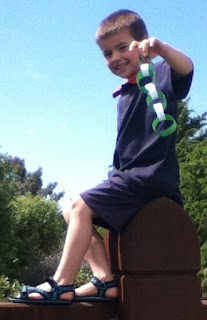 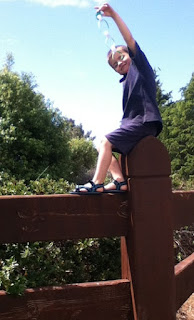 I didn't have my camera with when I went to fetch the children after school, but could at least use my camera to capture this little monkey of mine. We had to wait a bit for one of the girls and it didn't take him long at all to hop up onto the fence. Such a boy. :-) 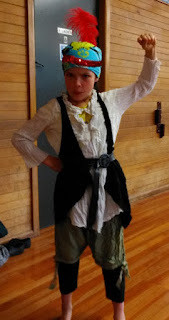 Thursday 24th: I dropped the girls for their dancing practices at 4 and then headed to the library to get some work done. When I got back at around 6 Hannah was dressed like a pirate. I had asked on the local fb page if anyone had any old clothes we could use for a pirate outfit. One of the mothers of Ruth's ballet group must have seen my request and she lent us pirate dress up clothes. This whole outfit for Hannah (without the sword) and a top & bandanna for Ruth (all she still needed). I was blown away at the wonderful provision. And Hannah looks so good too. You can imagine how thrilled she was with it. 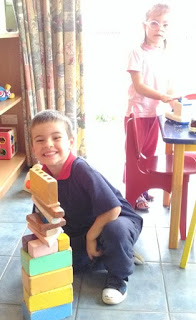 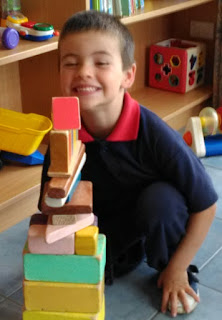 Friday 25th: Yesterday morning Asher had a crying session where her stomach seemed to be really hurting her. So I had an appointment at the doctors for her this morning to just check it out. I took Hezekiah too to just get an "all clear" on his ear. It flared up last week, so I just wanted to make sure it was all clear. And to check it was ok to get wet. They have started swimming at school now, so it's good for him to know it's fine if it gets wet. 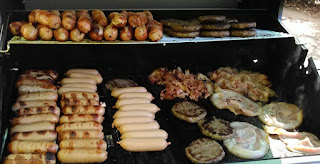 This afternoon / evening I got to have some "time off" as Brendon watched the children and I headed up to Hamner Springs with Holly to run a BBQ for them. The event had been organised for the whole community with jumping castles and the BBQ to just support them and give the children something fun after the stress of the earthquakes. They were all so very thankful and it was lovely to be able to serve them in this way. 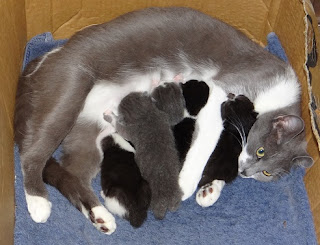 Saturday 26th: Kittens are 1 week old today.
Brendon was working this morning, but Ruth was a great help with watching Asher so I could get some weekly food prep things done. I always make a double batch of mayo and cashew butter for the week. Tomato sauce was an extra for today because of having BBQ meat to enjoy.

The mayo is just coconut oil, egg and salt. The cashew butter is just cashews (I like cracking sea salt on my toast after I have put the cashew butter on - so I don't include the salt when I make it). 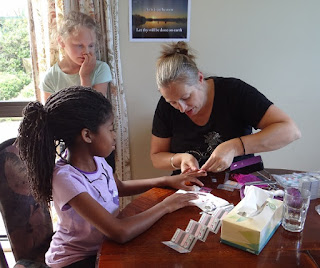 This afternoon Rachel, Ruth and I had a special afternoon out at the Jamberry Nail party that I helped Rachel organise. The Love's allowed us to use their home (which was closer to everyone). I felt so silly for not taking a photo of the food before it was enjoyed. Rachel put on a nice spread (with a bit of help from Ruth and I).
Sunday 27th: We had a Sunday School picnic after church today, so all the photos will have to go in a separate post. It was the rough day for Asher though. She woke with a 1 minute Tonic Clonic at 6am. She then had another at 12pm (just as we were leaving church) and another at 6pm (all 1 min TC). She had a slight fever in the evening, but thankfully she didn't have any more over night or though the next week.
Thanks to all those who prayed especially for her at that time.
Posted by Buckland at 10:00 PM