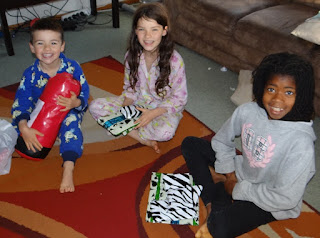 It's always exciting to have a few presents to open on a birthday morning. Exciting for all of them that is. :-) The girls had wrapped the presents, so they were just as excited about giving them to him. 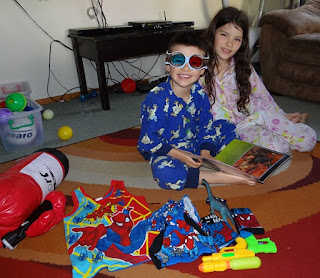 He was very pleased with his presents. The boxing gloves and bag went with to preschool today for "show and tell". He took his 3D bug book (and glasses) on Tuesday to let all the other children have a turn too. He had asked me to get him some spider man clothes. The best I could do was a singlet, undies and socks. He was pleased about telling them at preschool too - thankfully not showing the undies. ;-) 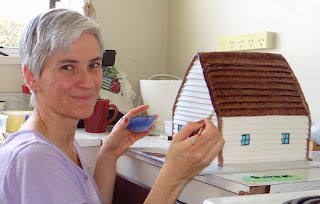 As soon as Hezekiah was at preschool I got started on the cake. Brendon was home to watch Asher (he has the whole week off with Rachel being away at camp). Hannah kept me company through the morning and then Ruth started helping just before and again after lunch. Ruth coloured the blue and then cut the little windows out for me. She also made the "school" sign and helped where she could. It was the first time using a paintbrush to decorate. Cocoa in water makes a lovely brown paint. :-) 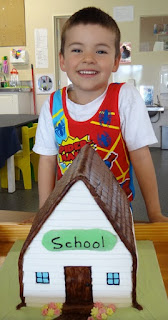 At 3pm we took the cake to the preschool. Asher did nap after lunch, but was up in time for us to all head down. Hezekiah was very excited about his cake. He had asked for a "school" because of him going to school now that he is 5. I thought it was a nice choice and was pleased with how it turned out. 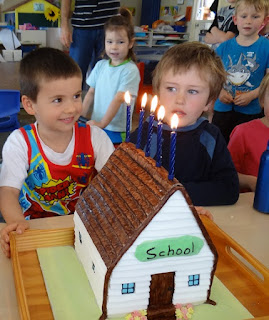 Darcy turned 5 in September, so already started school before the school holidays. The preschool was happy for a few of us to join for afternoon tea today, so Darcy (to his right) and David (to the right of Darcy) also came and joined us to celebrate. This ended up being a perfectly timed photo as Asher was enjoying pushing the pram around the preschool, so it was nice to have her in the photo too. 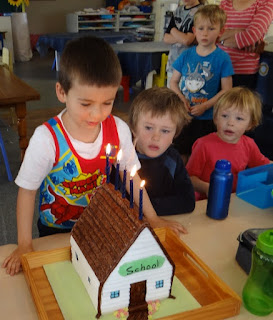 Then time for the candles and singing. 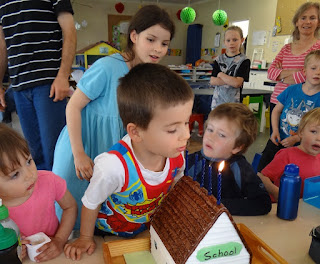 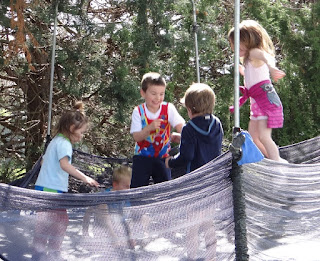 David, Beth and Darcy (with his sister) then came for a play at our home. The trampoline was a great source of fun when they first arrived. Then the water guns came out and they had loads of fun with those.
David's sister Danielle also came, but Ruth and her disappeared and we hardly saw them through the afternoon. :-)
Asher really enjoyed the trampoline, but a little while afterwards (at 4pm) she had a 1 minute Vacant seizure. The photo below was taken just afterwards, while she had a sleep on Dad.
Ruth had organised a "pass the parcel" which they enjoyed. Hezekiah's "task" was to do 10 star jumps. He is getting really good at them too. 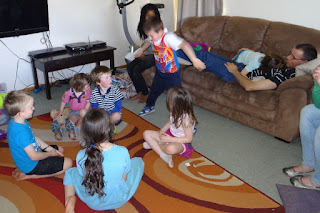 It didn't take them long to get back to the water guns. They had a great afternoon playing together. It was a special day.
Unfortunately it wasn't a great afternoon for Asher. She had a 3 minute vacant seizure at 5pm and then a 1 minute Tonic Clonic at 7pm. She went blue around her mouth with this last one, so we were thankful it stopped so quickly. Thankfully she had a seizure free night (and week ahead). 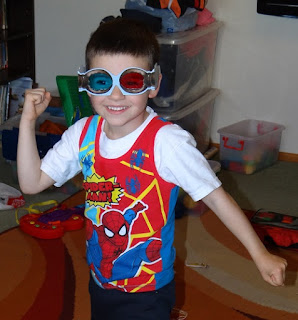 It was a really special day for Hezekiah and I am so glad he had so much fun. We thank the Lord for him.
Posted by Buckland at 10:00 PM