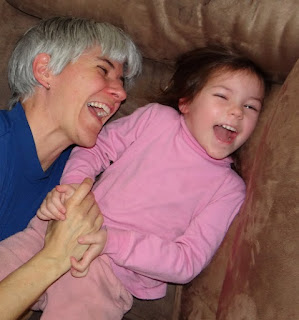 Tuesday 26th: Asher learning to say "Dora" and getting a "Yay" from me with a tickle every time she got it right (and then asked "more").
She has changed from watching Diego to Dora lately. As she had her own way of saying "Diego" (the start of the work - "Dee-ai") she had been calling Dora "Dee-ai". So we have been trying to teach her to say Dora but she would say "Dee-ai Ra" instead. Today I emphasised the "D-aw" at the beginning. We had a game of it and every time she said "D-aw Ra" she got a tickle. She just loved it. Even though there is still a pause between the sounds - she is getting it right. It's amazing to see the concentration on her face as she does it. Wonderful to see her managing though.
While I was out taking the older girls to St John, Asher had a 7 minute Tonic Clonic seizure. Brendon was busy making Hezekiah some food, so Hannah was watching her in the lounge. 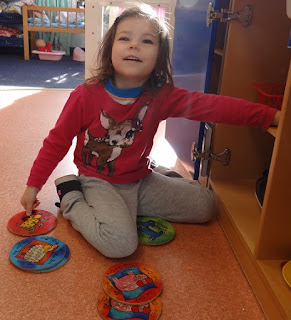 It was the first seizure that Hannah has been alone with her. Hannah did really well, stayed nice and clam and called clearly "Asher is having a seizure". Brendon had head a thump (Asher falling) and then immediately heard Hannah's call. So she did really well. Unfortunately Asher went a little bit blue around her mouth. She also had what seemed like terrible stomach pain when it stopped. Lately she has often had shaking after the seizure stops (like shivering) and Brendon said it was really bad this time and he struggled to get her to relax. Poor little girl.
Wednesday 27th: Back to Champion Centre now that it's school term again. Asher does love these matching coasters. 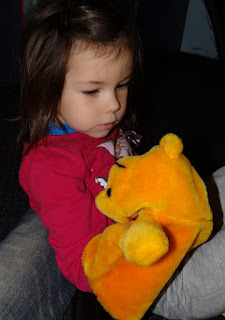 During group music Asher got to play with Ali's puppet at the end. It helped give her something to do while the other children had a massage (Asher does not like lying down for a massage AT ALL). Ali uses it at the beginning when they sing the "hello" song and so Asher made the puppet look at different people and said "hi". It was so cute. 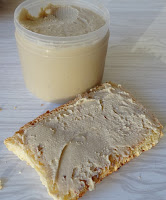 A new addition to our families enjoyment is cashew nut butter. I don't know why I didn't do this ages ago. There is no need to add any other oil at all. And it's delicious. Megan suggested it when I was asking her about alternatives to butter (for on toast). Yum yum. Brendon, Hannah and I can't have butter, so this is a great option for us to enjoy a hot piece of toast (gluten free bread of course - recipe can be found here). 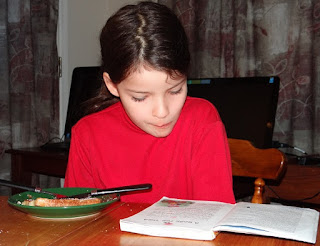 Thursday 28th: This was most definitely a photo opportunity. Seeing Hannah choosing to read first thing in the morning. It's not a compulsory school book, but rather one she got out of the library. Unfortunately it ended up being a bit too long for her. I'm so pleased she tried though. :-) 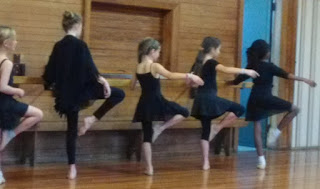 School term means ballet is back on. Ruth is the only one from her class doing the exam. When it comes to their dances, Ruth does it on her own with the rest watching and giving input, and then they all dance it together.
The practice exam is on Saturday 20th August and exam date is Tuesday 30th August - so just a month to go now.

Rachel was back at ballet today. She had an ankle guard on and didn't do any "loading" of the ankle. So she didn't put any weight on it if it wasn't in a normal standing position. So she really just "marked" a lot of the exercises as she was not able to do them properly (so she walked through them and focused on her head and arms). 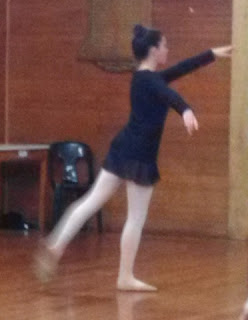 She has been practising at home over the last 2 months while off - but mostly just sitting and doing the foot work off the ground. So at least she has not forgotten any of it. The ankle was a bit sore over the weekend, so she just has to take it slowly. The healing has taken a lot longer than we had hoped and she is still not anywhere near where we had hoped she would be at this stage.
I chatted to the physio on Monday about the scan results. She confirmed what the radiologist told us - that there are no tears in the tendons or ligaments. The physio explained that the dark area we saw in the middle of her joint is inflammation. So although no swelling is showing on the outside (and never has), it is still inflamed in the centre of the joint.

Rachel is doing what she can to try and get that cleared. She does ice and heat regularly (especially after extra exercise like work this morning and ballet this evening) as well as taking collagen and turmeric. Thankfully her exam has been moved to September, so she has a couple of extra weeks to hopefully get back to being able to use the ankle properly by then. Only time will tell.
Friday 29th: Ruth has been trying to earn some extra money this week and finally got the hoped for money from Rachel who paid for some massage. We all had a good laugh as the reason she wanted the money was to hire this DVD from the library - FOR Rachel. It was a "gift" to her (which they all then got to enjoy). 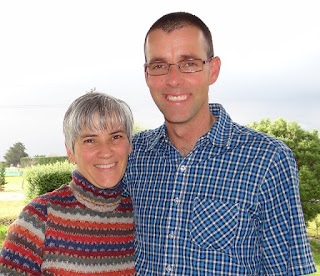 I was really pleased with the library sending home a form that I had to sign before Ruth could take it out, as the DVD was PG (parental guidance for younger viewers). I could then do a bit of research and find out about it before she got it. We could also then discuss a few things before we even started watching it. We enjoyed watching it with the older girls over Friday and Saturday evenings.
Saturday 30th: Yes, it was a picture worthy moment - with Brendon and I going out for the afternoon - ON OUR OWN!!! A friend has organised a book club of sorts, and we enjoyed a lovely afternoon fellow-shipping and discussing the book we are reading. 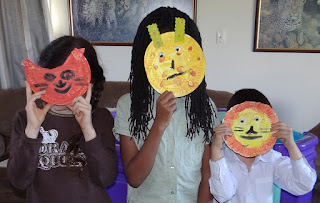 Ruth's creative juices were flowing while we were out and they created these lovely animal faces.
We also had a neighbour come over to watch Asher (using some of the carer support hours that I have available). It was nice that Rachel and Ruth didn't have full responsibility of watching Asher and could get other things done. It's a nice way of introducing her to watching Asher and all that is involved with that - but still having the "backup" of our girls there to help with any seizures or just with daily communication challenges that come up.

Sunday 31st: We dropped Rachel off in Amberley on our way home from church so that she could get some St John competition practice done. 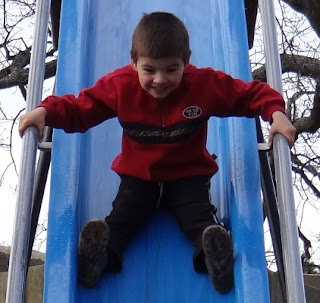 Brendon took Hezekiah to pick her up later in the afternoon. A great opportunity to visit the park there. 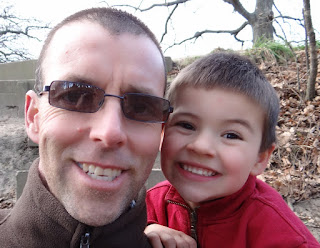 And enjoy some "parent-child" time together.
It looks like we will be breaking our pattern for a while. We used to alternate between Brendon and I with the older 4 children (and it was due to be Hezekiah and I next), but as there was some heavy furniture to be picked up on the way home, Brendon was the logical choice. There was no way I could do it. I also get to regularly spend time with Rachel travelling to different things (like ballet and the orthodontist) so Rachel and I might not be included in the schedule for a while.

A first for me was cooking salmon this evening. None of us have ever had salmon this way (only ever had thinly sliced pre-smoked salmon - or in sushi).

Brendon, Ruth and I were the ones that mostly enjoyed it. Ruth especially needs the Omega 3. I was pleased I managed to cook it well. I was hoping Asher would like it, as she has gone off protein for a while now, but alas, she didn't even want to give it a try.
Posted by Buckland at 10:00 PM