Windows in the container 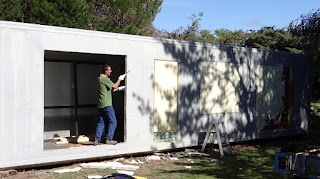 Saturday 9th: We were blessed to have Leigh and Tobias come and help today with the installation of the windows and door for the container.
There was a lot of planning and measuring before any cutting could get done. They had to make sure that they were cutting the outside and the inside in exactly the same place. And then use a different tool to cut out the insulation. 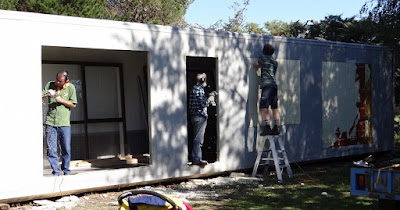 Once the insulation was cut out, the edges were smoothed (what Brendon is doing in the first photo) and then a section of the insulation within the wall needed to be taken out (what Leigh and Brendon are doing in this second photo).

And it was a rather time consuming job too. 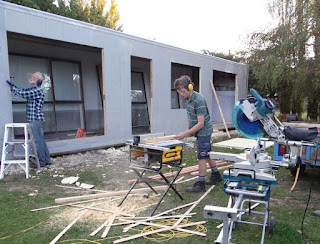 The wall then looks like this. Once the section of insulation is out, a piece of timber is put into that section.

All the timber needed to be cut and fitted. It was so helpful that Leigh could arrive with all this tool, ready to go.
The top and bottom pieces took more work as they needed little notches in to match the irregular shape of the external wall of the container. 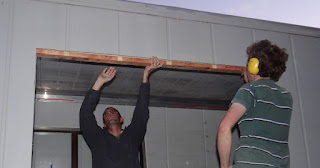 It's not the best time of year to be doing a project like this because it gets dark so quickly. They managed to get so much done though, and we were so thankful for them giving their time today (as well as all their skills and tools). 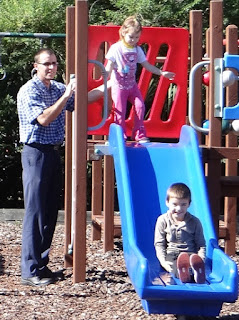 Sunday 10th: On the way home from church we stopped for a play in the park. It's nice for the children but the added advantage today was that Rachel had been busy with St John training this morning, so we could just hang around till she was finished.

Just as we were leaving church, Asher had a 1 1/2 minute Tonic Clonic seizure. Thankfully she was holding Brendon's hand as they were walking to the car, and so when it started and she dropped, he was able to hold her and stop her from falling on the drive and hurting herself. It was a nice 15 day gap again, so we are thankful for that. 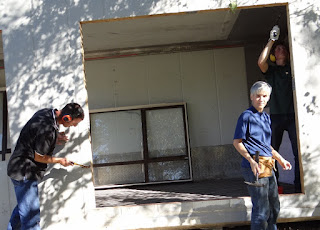 Tobias was thankfully available to come and help us in the afternoon. Hannah had a go at taking some photos. 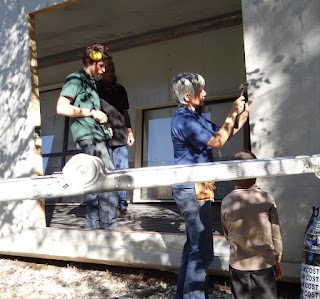 First step was getting the last timber sections secured in the wall. This creates the solid frame to install the windows onto. 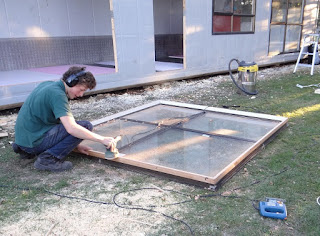 Then the reveal of the windows had to be cut to side and sanded.

The extra wood on our scrap pile. 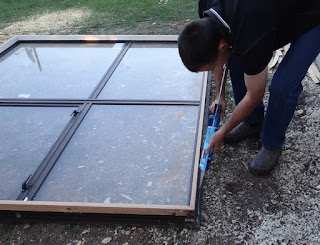 We first checked the windows for their fit. Then Brendon put silicone around and they picked them up and held them in place while we swapped. I helped hold on the outside while they nailed on the inside. 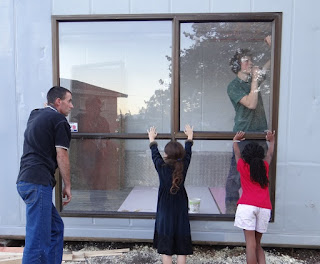 Ruth wanted to help with "her bedroom window". Rachel took this photo as I had to head off in the car searching for Shadow (who had slipped out when Rachel and I had the gate open, moving the floor boards in). 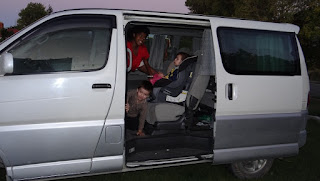 Asher seemed to be really upset about going in the car for such a short trip. When we got home she just did not want to allow us to take her out the car. 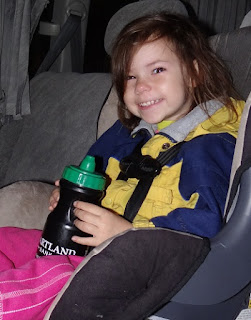 As long as we left her in her seat - she was as happy as could be. 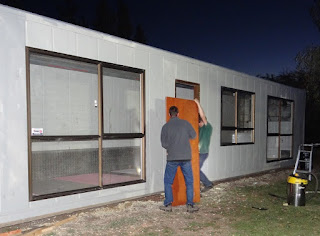 Seeing the vacuum there reminds me of how kind Tobias was to bring that with. It's got a reverse function, and so when I mentioned on Saturday that it would be nice if I could clear all the bits of insulation out the floor, he had thought to bring it with for me to use. So while Asher was sleeping I was able to get the floor cleared (blowing it along the grooves - as you can't just sweep as it falls into the lower section of the floor). Brendon would have just left it all under the floor boards, but as we will be putting wiring under some of the floor, we felt we could rather be safe and clear it out.

We eventually had to get some extra lighting around as they worked even once it had gotten dark (the photo above taken at 7:40). The door was only installed as a temporary quick solution. More work on the frame still needs to happen, but for now at least it's in.
I took this last photo the next morning to show the results of all the weekend work. It was a much bigger job than we expected, and so we are so very grateful to have gotten so much done.
Posted by Buckland at 10:00 PM