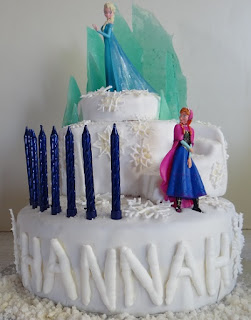 Hannah was excited about the idea of a Frozen cake, but we kept the actual cake idea a surprise.
Our idea with the Frozen theme was to stick with white icing (and therefore avoid major food colouring - although there is still some in the white fondant icing). 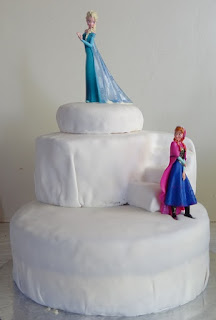 It was only in the morning when she opened her presents that she saw that she had been given the two dolls for the cake. 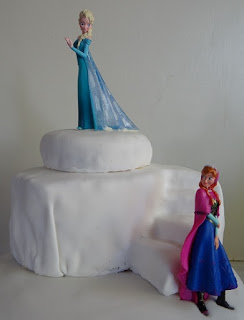 So when she left for school she just knew that it would be a white cake with Elsa and Anna on as well as the snow flakes and "ice" that I had made.

I spent a bit of time cutting the 2nd layer to forms stars. We made a small 3rd cake for Elsa to be that bit higher in her "castle" of ice. 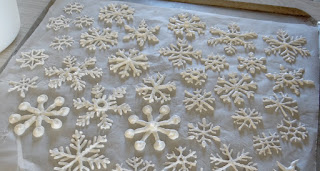 The snowflakes were made out of egg white and icing sugar. I did these early in the week so that they would dry. 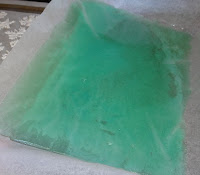 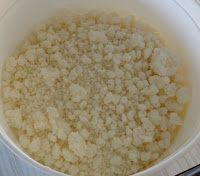 I did eventually get a batch of rock candy right with a touch of blue colouring. It looks a bit green because the rock candy started off a bit golden (yellow and blue do make green).
One of my rock candy failures became "snow". I had wanted to avoid the golden colour, and so tried to cook it slower. This was not a good idea as crystals formed and as soon as I tried to stir it (with the plan to add colouring) this happened. 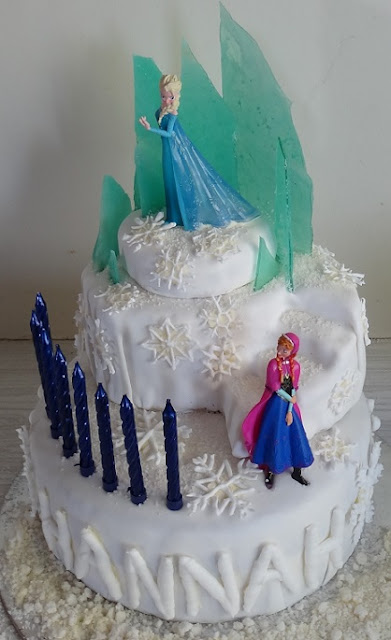 A view from the top so you get to see some of the "snow" that was sprinkled over the whole cake. 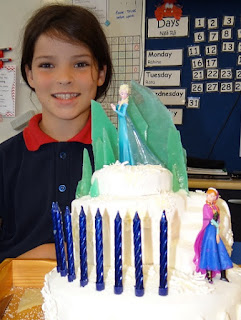 Hannah was so excited when we arrived at school with the finished product. It was a bit stressful for me to have such a specific time frame to work in (we had agreed to arrive 15 minutes before morning tea break).
A few of the children were asking what the "ice" was and so I gave them a quick science lesson about boiling point of water and evaporation ect. ;-)
It was nice that I had some of the first un-coloured batch (you can spot the golden piece to the left of the cake in the tray) so that Hannah could enjoy some rock candy too. 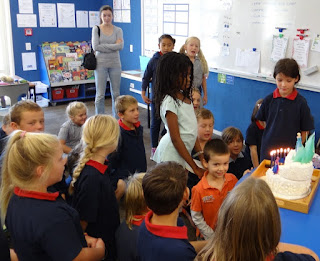 It was nice that Hannah could share the cake and celebration with her class. 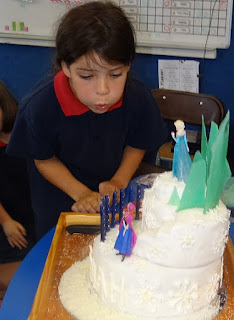 I had wondered if there would be cake left over as I made a couple batch of sponge cake (we didn't want to take any home because it's wheat and so a break in our diet as a treat).
I needn't have worried though - with cutting decent sized pieces the entire cake was finished once everyone in the class had a piece. I was pleasantly surprised when all the rock candy and snowflakes were polished off too. :-) I suppose I've never been to a birthday party with over 20 children. :-)
Posted by Buckland at 10:00 PM