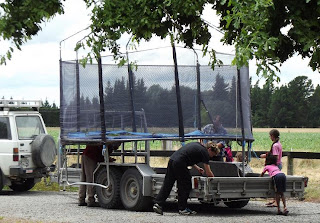 Dave arrived at lunch time with a HUGE flatbed trailer and two strong teenagers to help us move. They took a load of garden things over and by the time they were back for the second load Brendon was home and helped them get the tramp onto the trailer. I was so very thankful that it could be taken - as is - and did not need to be dismantled.
At 2:30 I wrote: "Girls are helping dad offload at the new house so I can sit quietly feeding Hezekiah.
I think I needed this break." And then just before I wrote "Well - that was the calm before the storm. Just as I finished feeding Hezekiah they arrived back ready to start on the house (they had taken outside things first). There were 3 adults and 8 children moving things out of here at such a pace. Two big trailer loads are off. Hopefully they take a little while to unpack so that I can get the last stuff packed. Including the computer. Hopefully Hezekiah can have a nice sleep now and let me work." 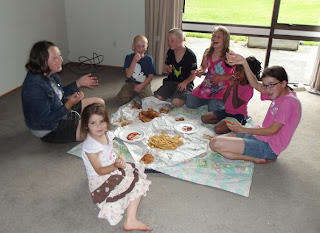 I managed to get the computer packed but Hezekiah did not sleep well and so my sewing cabinet and desk were just "emptied" onto the study floor so that they could take the furniture on the flatbed. So much for leaving things for Saturday.
Brendon organized some fish and chips for everyone and then we headed over to the new house so that we could set up beds for the night.
We headed to bed at 10 but I just could not sleep. I kept thinking about all the stuff on my study floor and eventually told Brendon I was going to go over to the house to do a bit of packing. So at 11pm I headed over and spent about an hour just getting everything into boxes. Thankfully I then had about 4 hours of good sleep and was busy again by 4:30am.﻿
﻿

Once everyone was up and fed we headed over to the old place to get the last boxes and get cleaning done. I had to watch the time carefully as I had to get Rachel to a pick up point at 8am for Jamboree.
We headed home for morning tea (and to off load) and then back to do more cleaning. I had not even packed my pantry on Friday - so everything was packed very quickly on Saturday as we had said we would be out by lunch time. Alby arrived again with the 4 younger children and they helped with the last clean up at the house before lunch. What a blessing.﻿
﻿

It was an incredibly difficult 24 hours for me though and I told Brendon it was probably the hardest 24 hours of my life. I felt as though I had not done enough planning and packing before hand and it all just felt a bit "out of control".
I think I also missed that womanly help that I had at our last move. I have often heard people talk about moves as being among the top most stressful things to go through and I never really understood that until now (even though we moved 10 times in our first 10 years of marriage). This was the hardest move by far. I am sure Rachel's Jamboree and having a baby to feed added to it all - but I am looking forward to being in this home for many many years to come. 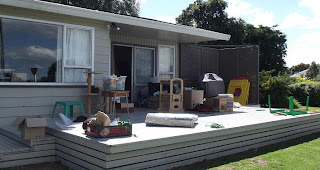 One of the things that was quite overwhelming was the fact that there were boxes and furniture everywhere. The house felt full and the deck was loaded up too. I never got a photo of the garage but it was so full and disorganized (that was why they ended up filling up the deck). It was wonderful having all the children helping - but I think there was just one adult extra needed to direct where everything was put. Brendon and I were just too busy elsewhere.

I was very grateful to our friend Jonathan who came out from town to help us on Friday and then slept over and helped us the whole day on Saturday too.

He was able to help Brendon with moving furniture around so that I could focus on getting the kitchen a bit more organized (as well as continuing to care for the children) and start unpacking a few important boxes. The girls had fun with Jonathan too.

One of the things Jonathan suggested and helped with was getting the TV set up so that Hannah could watch a DVD (and thereby give us all a bit of a break from her too). I think she benefited from just slowing down a bit after all the excitement of the move.

Steve then brought dinner for us (although he could not stay as he had other children at home to feed). It was such a blessing to have a warm cooked meal. Ruth was also such a big helper through the day. Here she is packing the sleeping bags away as we finally had all their bedding out and set up for Saturday night.

On Sunday morning I got the luggage bags opened (for everyone to find clothes for the day) but did not get around to unpacking them so the cats decided they would sleep there for the day. I am thankful they have coped fine with the move. 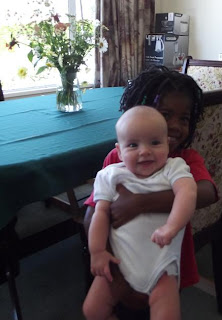 Ruth has been waiting for our move for another reason. She has always wanted to hold Hezekiah "standing up" and I had told her that once we were in the new house his neck may be strong enough for her to do that. Well - she had not forgotten and so she finally got what she has been so looking forward to.
I popped over to a neighbour yesterday to report our phone that had not been connected yet. She had a beautiful arrangement of flowers on her table - all from her garden. We were so blessed on Sunday morning when she popped in for a bunch for our table. She then invited us for dinner too. Blessing upon blessing.
Oh - and I must record what happened when I phoned about our home line. After telling the operator what the problem was he asked "are you calling from home?" Um - no - I just told you my phone is not working..... I had to laugh.
Posted by Buckland at 9:00 PM