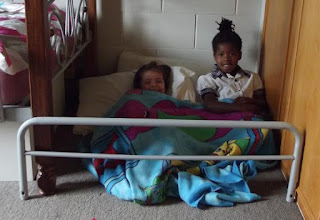 Monday: These two having a great time of imaginary play.

Tuesday: Ruth has been asking if she can do the dishes for ages. Have you ever heard of a child asking for a chore???? She does have the job of unpacking the dish washer and sometimes complains about that. So I told her she would only be allowed to start washing dishes and packing the dish washer when she did her job without complaint. 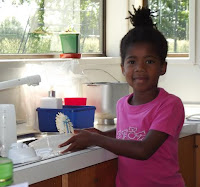 Well - she has not been complaining and has just sort of "taken over" from Rachel with rinsing the dishes and packing them into the dish washer.

We also managed to get one batch of Christmas cookies made today. It's been something that I have been sad about - that this month is just too busy to do our normal cookie card things. But at least we have some biscuits to share with visitors. We tried a new recipe and although they did not press out very easily (it was the recipe that goes with the electric cookie press) they do taste wonderful. No icing needed this year. These are good on their own. I did add Almond essence to the recipe as we are really used to that flavour in our Christmas cookies. 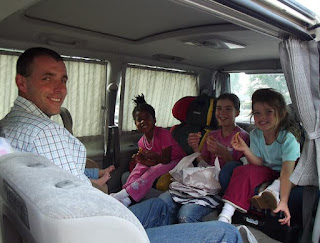 And then we headed off to Amberley for Carols in the park. It was all quite last minute and just "spur of the moment" type organizing so we put the chops I had taken out in the fridge and we got take aways for dinner. While we were waiting for the food I managed to work out how to turn the 2nd row of chairs around and so we had a picnic in the car (the breeze was a little chilly). This was a highlight for the girls - they thought this was SO much fun.

Wednesday: Little boy in brown. It's been so cute to get some of the different t-shirts and shorts out for Hezekiah. 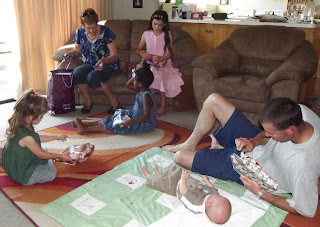 We had another spur on the moment plan today and had Bob and Lynn over for tea. It was lovely getting to spend the time with them. They are the girls local grandparents and really enjoy time with them. Not to mention always having Christmas presents for the children.

Thursday: We took Patches back to the vet this afternoon for a check up. She is still not putting weight on her leg and it looks really skew. It was quite an emotional afternoon and a long story with all the decisions that we had to make (not wanting to spend loads of money on things like x-rays which won't even help her get better). The main strain was when the vet said the recommendation is 5 weeks of cage rest. I knew this was just not something we would be able to do. Brendon explained this to the vet later in the afternoon and the agreement was made that we will just wait and see.
The vet had given more pain killers for helping reduce the bit of inflammation that was still there and more antibiotics to make sure there was no infection. I was really encouraged by the improvement that Patches has made though. The vet was able to really examine her leg and she did not complain at all. At one point she was lying on the table purring.
Friday: This week was a first for me. On his own Hezekiah fed at almost exactly the same times Monday through Wednesday. On Thursday he started the day half an hour earlier (7am) and I thought this would be a really nice pattern. So today - even though he slept 8 hours and only fed at 6am, I fed him again at 7 thinking we could just copy the previous day. 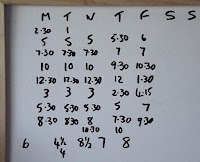 Well - he then had such a long sleep and went 3 1/2 hours rather than the normal 2 1/2 that he has been doing for weeks now and changed the whole day around. I had to laugh at the end of Friday because just as I thought I would have a predictable pattern with him - he threw it out.
(Note: On Saturday and Sunday we started at 7am and we have had identical days to Thursday - so perhaps there is a chance I can have predictable days after all. At least until he goes through a growth spurt or changes to a 3 hour routine).
Friday Afternoon: This afternoon could be summarised as an earthquake afternoon with four big quakes over 5 that we felt out here. The forth was a 6 and really shook us around. I was sitting at the computer with that one and the whole desk was shaking from side to side. Brendon was down stairs and immediately ran to Hezekiah who was sleeping in his cot. We are very thankful that they only shake us and don't do any damage out here. After the first one Ruth was wondering if more buildings had fallen down in town. She was right as we heard in the news that a damaged building did in fact fall. Thankfully the girls are not too upset by them. Rachel was the most upset with the first one as she was downstairs with Hezekiah while the rest of us were upstairs. When Brendon got down to her she was holding Hezekiah (he had been playing on his mat) and Brendon said she was as white as a sheet. She was worried about something falling on him. Poor girl. She obviously remembers the baby that was killed when a TV fell on him in Feb. We do praise the Lord for our safety and that no one was killed with these quakes. What a hard thing for everyone in town to go through - just before Christmas.
Posted by Buckland at 9:00 PM