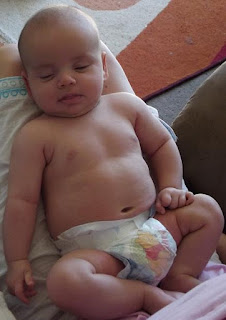 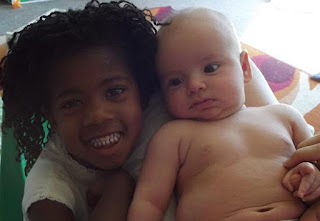 I can't believe how big Hezekiah is getting. He was a bit sleeping after his milk this afternoon when we took these photos. He is the chubbiest baby I have had. So in that way he is different to the girls. But it's not because he is "drinking me dry" as many said he would. He still only drinks from one side at each feed. 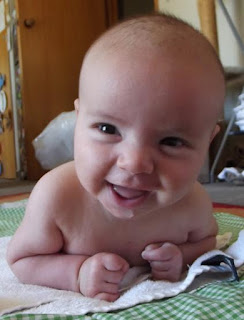 He is getting really strong too. And can you believe - just as he starts getting over his colic his first tooth is worrying him.
We noticed it already over the weekend as he started drooling so much and was just not his happy self.
We do still get a lot of lovely smiles, but we also have a bit of grumpiness to deal with in the day. He loves having someone rub that bottom gum for him (and you can just see the white of the one tooth under the gum). At only 3 months it seems this tooth may bother him for a while before it actually appears. Poor chap. 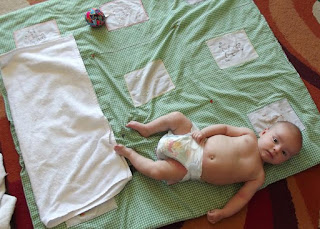 He is on the move too. I put him down with his head on the white toweling nappy (spoeg lap) and he ended up here!!!
He has been in disposables for the last 2 weeks as he has had a fungal rash. After a week it was almost clear and so we put him back in his cloth nappies but the rash flared up again within hours - so we are back to disposables. It's quite an adjustment for me to be using disposables all the time. :(

It was such a hot day that we finally ventured down to the pool at 6pm. Rachel did really well getting her head right under the water. This is a big achievement for her.
I love these two with their matching towels. 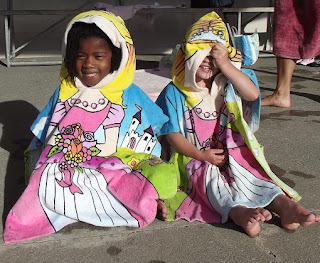 I was blessed by a stranger today (who is no longer a stranger). Mel came up to me and asked if I would like her to hold Hezekiah so that I could have a swim. And it was such a hot day I was so thankful for the lovely refreshing swim (and good exercise too). We then sat chatting for ages. What a blessing. 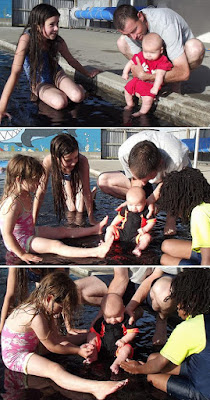 Just as we were getting everyone ready to go Brendon decided to see what Hezekiah felt about the water today. The last time I put his feet in the water he screamed. Today however it was obviously warm enough for him to be happy. So we quickly put togs on him and let him sit in the water. The girls were SO excited.
After I had taken some photos we thought he had had enough so we were changing him. He was kicking so much that we quickly took him back (with nothing on) and let him kick in the deeper part on the edge of the black area. I think the togs were making him a bit cold and he is far more used to kicking around in the bath with nothing on. He had a fun few minutes and officially had his first "swim". :-)
Posted by Buckland at 9:00 PM