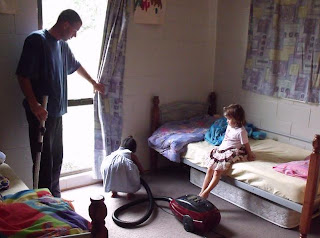 Brendon has taken two weeks leave. He had originally taken Friday off too for Hannah's birthday but that ended up being a public holiday so he will only be using 10 of his 18 available days. It worked out well for the scan yesterday and it was a lovely day off for everyone. Today however it was back to "normal" and the girls have realized that perhaps having Dad home will give them more to do rather than less. :-) It did not take him long today to get the girls cleaning up their room and then vacuuming too. 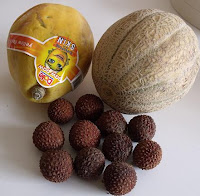 While we were in town yesterday we got some shopping done (as you do) and I specifically looked for some of those South African fruits I have not had for a while. I was very surprised to see litchis. Although I remember my Dad buying them by the box. Here there is only a box to buy from. Although perhaps I know why. At least 3 of the dozen I bought were bad (and poor Brendon ended up opening each one of them). The "rock melon" was enjoyed this morning (we know it as spanspek) and I was excited about finding a paw-paw too (although quite small).
NOTE: Unfortunately by the end of the week the paw-paw was not soft and by the end of the weekend it had started to go bad (while still hard). So I don't know if I will bother with one of them again.
Posted by Buckland at 8:00 PM