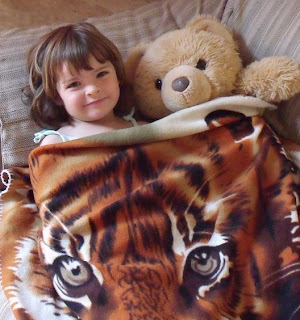 On Wednesday when we spoke with Grandpa and Nana on Skype we were chatting about the new little one and one of the things that Nana mentioned was that she does not buy presents within the first three months. I clearly remember her telling us the same thing when we found out I was pregnant with Rachel. I remember though that the next time we saw them (I was probably only 5 weeks by then) she had already bought Rachel a cheetah teddy. She said she just could not resist. :-)
This discussion got Rachel very excited and she immediately went over to the toy box and pulled out the cheetah as well as "Big Tess" which I was given by Brendon's Uncle Frank and Aunt Maureen at Christmas when I was around 6 months pregnant. And so "Big Tess" has been a "Big Hit" this week with all of the girls getting loads of extra love. 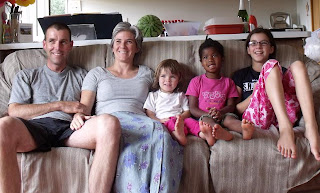 We did not have a very productive day today as it was raining most of the day. It was good to just enjoy the day together though.
It has become a Saturday tradition to watch American Funniest Videos while the fish and chips cook in the oven. So here is the family enjoying some laughs together. 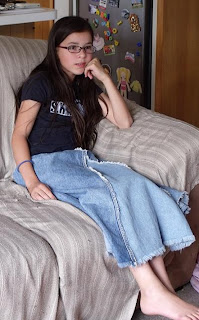 After dinner there was a break in the rain and so the girls had some time playing outside. Unfortunately Rachel's new shorts (which she loves and has worn a LOT) got ripped somehow. Sad how clothes that are often "pretty" are just not very strong. 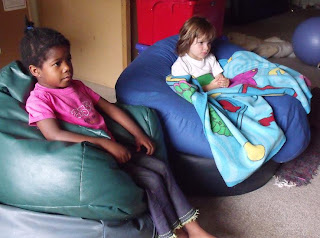 Once the rain started again they headed back in and so we let them watch a little more before bed. Rachel started watching "A Mid-summer night's dream" while the little ones watched Barnie upstairs on their computer. Hannah's Barnie blanket has been her favourite one for a while now and she gets so excited when she gets to see Barnie on a movie.
Posted by Buckland at 8:00 PM