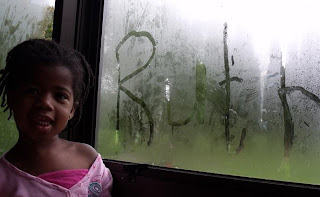 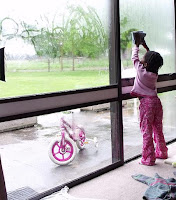 Ruth enjoyed using the steamed up windows for writing practice.
Normally I would say "No - you will make the window dirty" but realized that the fun she was having was so worth it. And part of the fun was cleaning the window afterwards.

Rachel collected another HUGE egg today. She was so excited to use it in the baking and see if it was another double.
This is a reason that most farmers don't keep laying hens after their first year. The variation in size is a packaging nightmare. 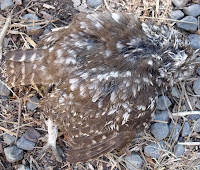 Ruth spotted this bird outside and said "Look Mum, the cats have caught an owl". I don't know if the cats killed it and I don't know if it's an owl (anyone know what it is?). But I was impressed with Ruth's guess. She only saw it from the back. Only when I saw the beak, big eyes and claws did I think she was possibly right in her guess. 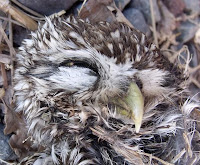 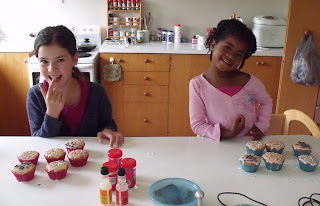 Rachel is heading off to Brownie camp this afternoon so the Spencer girls will be coming here after school. The girls enjoyed decorating the cupcakes for afternoon tea. We used orange and strawberry essence to flavour the icing and the girls look forward to seeing the the flavours can be identified. Blue cupcakes had orange flour and pink had strawberry - so they knew what everyone had taken.

Rachel has had a really good week using her new "daily and weekly jobs" set up. She loves seeing how quickly she can get her daily jobs done and got her things done by morning tea today. It gives her lots of time to get the weekly jobs done which she loves. Things like baking, sewing and drawing are weekly jobs that ideally have to be done at least once a week. This set up though has helped her to get a lot more drawing and sewing done than she normally does (and it specifically helps Mum and Dad see what she has done). It's also going to make sure she gets those weekly jobs done that she does not like so much like narration. 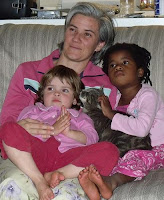 Sport is another weekly "job" that she does not find negative but does not think to do on her own. So it will be nice for her to have a reminder to go and play some netball or do some skipping. She does have her weekly ballet - so it's not like she is not having physical activity. But it's nice to develop other skills.
Ruth was very upset when Dad took Rachel and her friends to the camp this afternoon. So I asked if she wanted to watch something (I knew it would take her mind off it). She choose Mary Poppins and it was appropriate to hear "Just a spoon full of sugar helps the medicine go down". Mary Poppins was Ruth's sugar tonight. She will miss Rachel this weekend.
Posted by Buckland at 10:00 PM