It's been a month since Brendon saw the naturopath about his regular headaches and it's been a month of no headaches. We are so glad. And he did not even have to drink any terrible tasting herbs. :-) He is trying to cut down on his sugar intake (especially in tea and coffee - he is down to 2 teaspoons from 3 and hopes to eventually get used to just 1) but what has had more of effect is keeping his sugar levels more constant. I am very thankful for the fact that frozen salad sandwiches defrost ok and so I can make up a big batch of sandwiches for the whole week. Brendon noticed that around 3pm (if he forgot to eat his afternoon snack) a headache would start. He would then have his sandwich and the headache would disappear. So he quickly got into the habit of having a good afternoon snack and we are thankful that the solution to his headaches was so simple.
Since December last year he has not had any coffee (just the serial coffee substitutes like Caro) and that stopped his whole-day-migraine-type-headaches (that he would get at least once a month). It's great that just small dietary changes have helped so much. 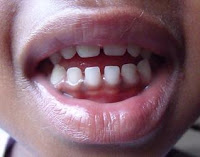 The sad news is for Ruth. I noticed a week or so ago that her front teeth don't close. The dental nurse called back today and after chatting about it said it is most likely the fact that she still uses a dummy. So before her milk teeth fall out the dummy has to go. Ruth has been motivated to stop using it a few times before but just feels totally different about it when it comes to actually getting into bed. She has been asking me the whole week about getting her "teeth fixed" and so when the "answer" came today she was very disappointed. I decided it was a good time to just stop (rather than waiting for her to loose her milk teeth). My heart broke for her this evening though when she said she feels sad without her dummy. I do pray she will get used to it soon. It's going to be very hard for her.
(In the morning she told me that she had sucked her thumb instead. So I asked her to please not suck her thumb as it would keep her teeth from getting "fixed". So hopefully she will manage to keep her thumb out. This was the reason we had not forced the issue sooner - we knew the thumb would end up being used. Hopefully she is old enough now to stop herself. I write this after a week and Ruth still cries every night at bed time. It's getting better though.)
Posted by Buckland at 10:00 PM