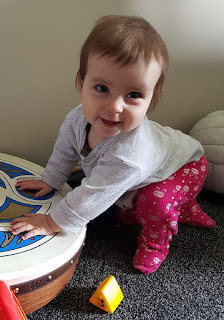 Monday 24th: Anastasia often plays with this drum. Such a sweet little face. 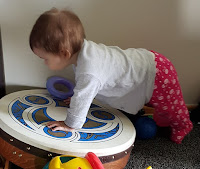 RIGHT: Fun on her toes. 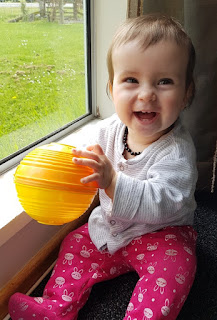 She enjoys playing at the window too. It's lovely having a nice low window like this, she gets to get a bit of sun and watch things outside, while keeping out of the chilly wind. 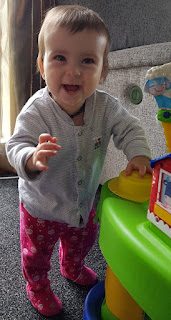 LEFT: Fun practicing her standing too. She doesn't often go in the exersaucer anymore, but it's still used a lot. She now just stands on the outside of the circle playing with all the toys. :-) 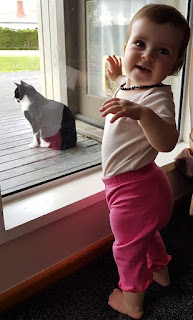 RIGHT: I have a photo of Hezekiah standing at this window looking at a cat outside - at almost the same age. :-) Just a different cat. 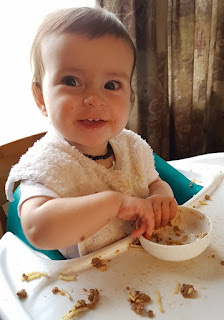 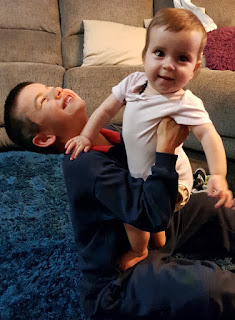 I had the Plunket Nurse come and visit today. Anastasia didn't put on any weight the last month, and has been gagging (and vomiting) every time I have tried to give her food. So we had a great chat about it all. She encouraged me to do "food play" where Anastasia is given all different food items that she can just play with. She will (as most kids do) put it in her mouth, but can just play with it rather than stressing about trying to eat. In this way we are hoping she will stop gagging and getting sick every time something gets to the back of her mouth. For now it just gets into the mouth for fun. If any happens to go further back she does gag, but is thankfully not getting sick.
NOTE: After a week of food play her gagging is getting less and she hasn't vomited once. She is getting good at moving the food back to the front of her mouth. The hope is that as time goes she will start swallowing some of the food by "accident" and slowly learn that it's safe to swallow. 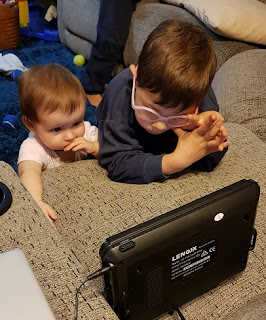 Tuesday 25th: I went for EAV testing again this morning. Megan was able to make up a remedy to help my body in areas that are a bit low (like Iron, Iodine, Zinc, and Magnesium) and help with getting a healthier gut. I was wondering how much my body was taking strain from having to fully breastfeed for so long. So it was good to know most vitamin levels are still good. Unfortunately as I am still breastfeeding, I was not able to get a remedy for any toxins as a detox would mean all that yuck would go straight into my milk. Thankfully there aren't too many toxins to worry about and it was also good to just recheck what food I should still be avoiding. There hasn't really been any change in this area. It was good to know though. 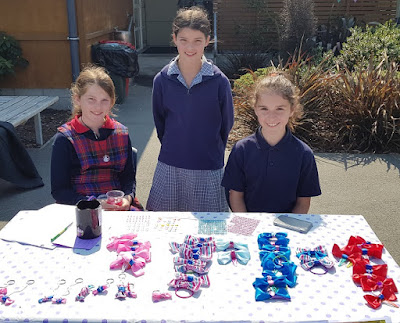 Wednesday 26th: It was the much anticipated Market Day today and the weather was perfect. The children have been creating things to sell for a couple of months now. Hannah's class even wrote to the bank to ask for a loan to have the money to buy all the material they needed. So it was an excellent entrepreneurial study. 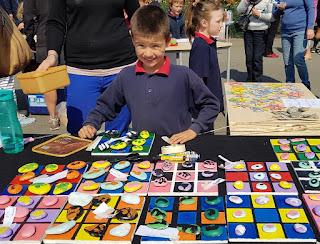 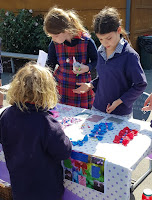 It was good practice working with money and working out how much change was needed. 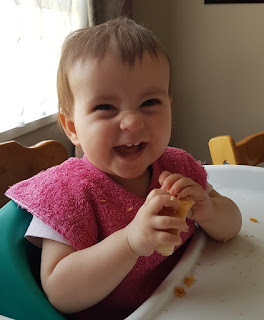 Lots of food fun this week for Anastasia. Enjoying a piece of bread today. Such a cutie.

On the last Book Club order I bought a book about making party balloons. I knew Ruth would love to learn and the others would enjoy getting her creations. It didn't take long for her to get creating once the book (and balloons) arrived this week. 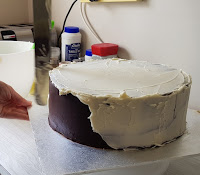 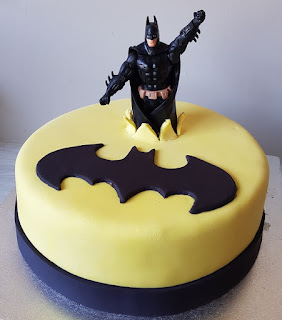 Thursday 27th:
Rachel had made Hezekiah's cake yesterday and done the crumb coat. Today the cake got finished up. I just love how smooth the ganache coat  is for forming the base for the fondant. The buttercream icing is just the "glue" to stick the fondant on with. She is learning more every time she does cakes and knows now that this layer needs to be rather thin. If there is too much buttercream on top of the ganache, it squishes around too much when the fondant goes on.
Well done Rachel. It looks great. 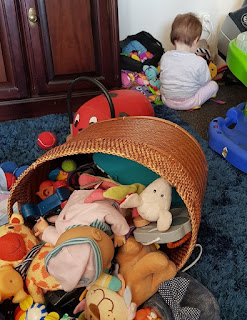 Anastasia is so funny. I put the toy basket on its' side so she could explore through it. She decided to head to the corner though and look through a different bag of toys. :-) 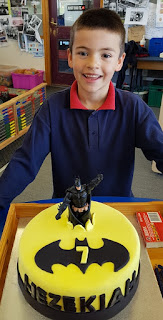 Friday 28th: Last day of term today, so although not his birthday yet, it was the ideal day to share his cake with is friends. He will be 7 on Wednesday next week.
Rachel's first letters didn't work, so she quickly got some new ones made this morning - and the number 7 was a great addition too. 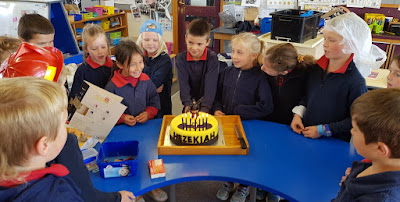 A close up with the candles. 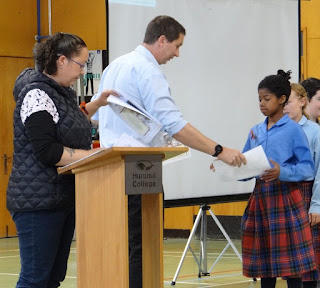 Full school assembly at the end of the day saw Ruth getting a certificate for the Problem Challenge of 2018. She received a merit which means that she was in the top 5 students out of about 20. So she did really well.
Well done Ruth. 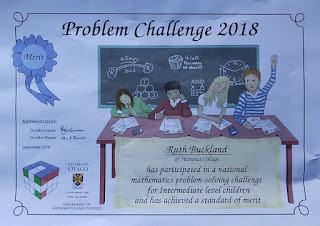 Asher did really well at this assembly too. Thankfully she didn't spot me when she arrived, otherwise it would have been "hi mum" until I went to sit next to her.
Not only that, but she didn't clap too much more than what was appropriate and even when she spotted Hannah and Ruth, she didn't call out to say hi to them. She just quietly spoke to Rachiel - telling her that she had seen them. So a great improvement for Asher. 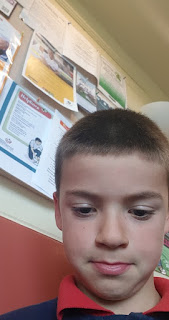 As recommended by the Plunket Nurse, I took Anastasia to the doctor this afternoon. She had suggested we just make sure there is nothing structurally wrong that is causing Anastasia to gag so much. There doesn't seem to be anything wrong. The doctor also agreed with the Plunket Nurse that at this stage, her slow weight gain is not too much of a concern. 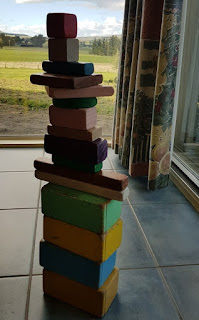 Hezekiah asked to use my phone to take a photo of his tower. So I thought I would also include his first attempt (when the camera was facing him by mistake). :-)
One of the concerns the Plunket Nurse had about Anastasia just being on breast milk still, is that she felt she won't be getting as much iron as she needs. The doctor asked what my iron levels were like. I know the EAV testing showed that it was low, but officially I don't know as I haven't had a test since the pregnancy. So he suggested we just check my iron levels. He even offered to drop the sample off at the lab in town this afternoon as it was too late to go with the courier. So kind and thoughtful. 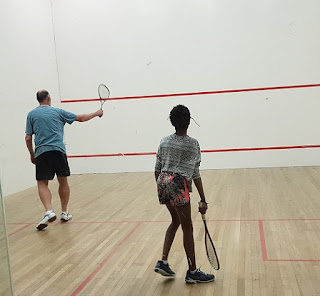 NOTE: The results came back the next week, with my iron on the low side. So the EAV testing was again confirmed to have picked it up accurately. Hopefully the remedy will help my body to better absorb the available iron from my food (as I do eat enough red meat).

Friday is a regular squash evening for the family with Ruth, Hannah and Hezekiah all keen to get a bit of a play. Sometimes Asher stays with Rachiel or Rachel, or Brendon and I just take turns. It's been nice to watch Ruth improving. She enjoyed getting some coaching from Tjart this evening. 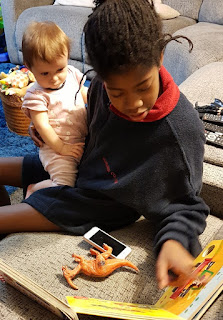 Ruth reading to Anastasia this evening before bed. :-)
Posted by Buckland at 10:00 PM