First cold and some fun in the sun 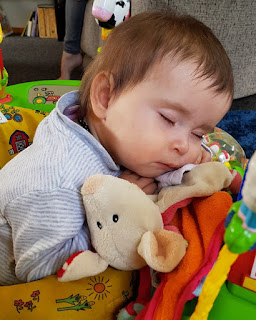 Monday 17th: We left too early on Friday to worry about getting Anastasia's 10 month photos, but today she was just so tired that I didn't bother either. The cold that started last week thankfully didn't worry her over the weekend, but I could see how sick she felt today. Falling asleep while sitting in her ExerSaucer. I saw that she was nodding off, so put a couple of soft toys in front of her for a pillow. Thankfully she did get more sleep through the day, but she is waking more at night too. So much post nasal drip that I think it was especially nice for her to nod off in this upright position.

Tuesday 18th: Although not over her cold, she was happy enough this morning to get some 10 month photos.
She hasn't put any weight on over the last month, most likely due to the fact that she is so very active, crawling around all over the place now. 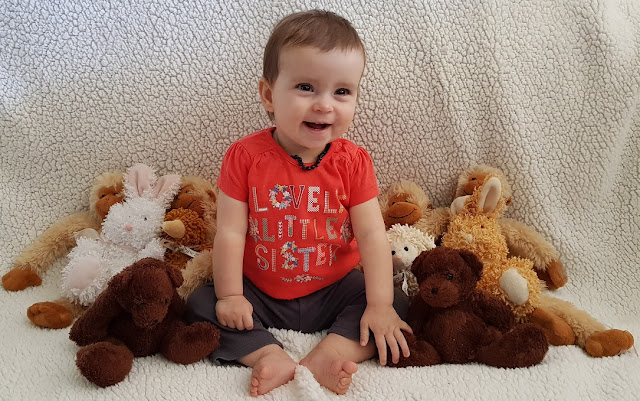 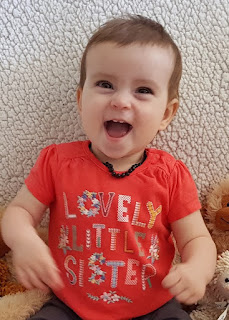 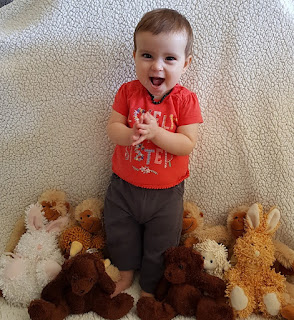 She is not standing totally on her own yet, but it's not too far away. 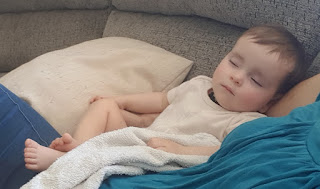 An hour after the photo shoot she was exhausted again and enjoyed sleeping a bit more upright in my arms.

She does not often just cuddle, so Ruth enjoyed getting some cuddle time with her this afternoon. She is normally too much on the go to stay still for more than a couple of seconds. Poor poppet. 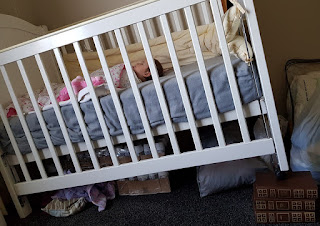 Wednesday 19th: I called the Plunket Line to just chat about what things to look out for with this illness. It was nice to just have a good chat with the nurse and know I wasn't missing anything. She mentioned lifting the cot for her, a full 15cm on the one side. It worked really well and she has started sleeping a lot better in her cot now. Not as good as before the cold, but much improved.
BELOW: Thursday 20th: The Ticket to Ride game has been so well enjoyed. The three of us all got really long trains today. It's been good to see the great improvement Hannah has made. 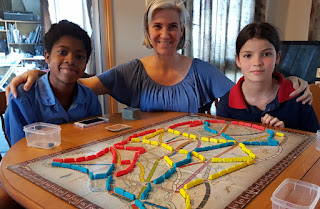 Friday 21st: I had a very challenging afternoon with the children and got so very frustrated. Brendon had asked Robert (the HR guy at work) to give me a call as he has been able to help me with over the phone counselling in the past. Well, at first I just didn't even want to talk to him. I was crying so much I didn't know if I would even be able to explain what was going on. Brendon encouraged me to just try and I am so glad I did. It was firstly great to not be judged. And once again he was able to ask the exact questions that I needed to be asked. I had never really analysed why I can get so upset in situation like today, and so it was really helpful to have someone help me do that today. I realized that the thing that was upsetting me was the meanness between the children. I realized that I experienced meanness when I was a child, and so I was wanting to try and protect my children from that pain. Robert suggested I try to just not get involved and let things play out. 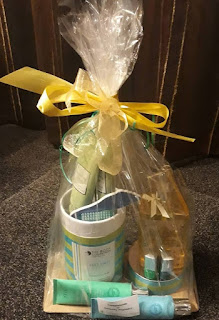 I would often here the mean conversations starting in the room next to me, and would start at the children, trying to get them to stop. The result however, was that they never really get to understand what the end result of their speech will be. They don't really see how mean it is. So over the next week I made an effort to just ignore meanness that I heard. It was hard, but it helped. I think this will help the children to start seeing the meanness themselves.
Parenting sure is hard, but I am so thankful for the help and support that the Lord has given me.
It was then really nice that in the evening I got to go out with Rachel and Ruth to a lady's event that the Medical Centre was hosting. Ruth came with to sell some jewellery (they had invited her to have a table). It was a very informative evening and nice to just have something different to do. Ruth sold a few necklaces, which was great, and another bonus was that Rachel won one of the spot prizes (she had a red sticker under her chair). What a lovely hamper. So a great night for us all. 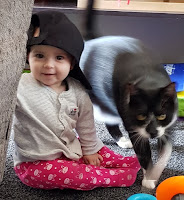 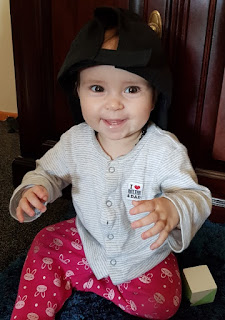 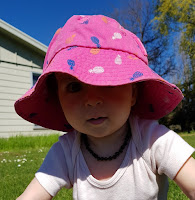 Her siblings enjoyed putting this cap on her.


The Plunket nurse I had spoken to over the phone in the week had suggested getting both Anastasia and I out into the sun more, so this morning was a great opportunity for that. Ruth also used the time to get a load of photos of her while out there. 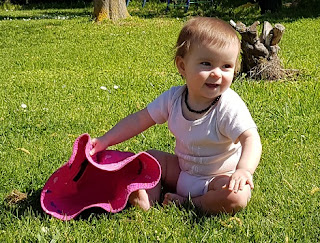 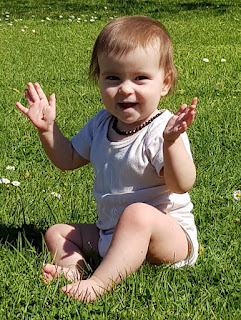 Such a happy girl. She loves clapping now too, so this was a lovely photo capturing that fun too.


BELOW: Hezekiah was a great helper with this bed. Brendon had turned over the weeds with his big fork a while back, but I hadn't gotten to clear the weeds and grass yet. So we sat and hit the clumps on big rocks to loosen the soil and then remove just the unwanted plants. The sweetpeas on the fence are looking good. I hope we get a lot of flowers from them. 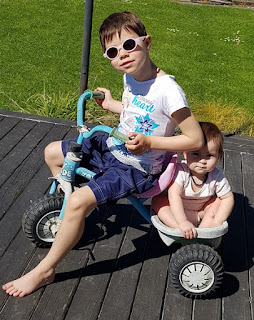 Ruth also decided that it would be fun for Anastasia to have a ride with Asher. :-) 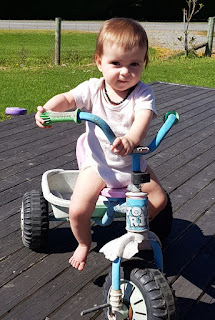 And on her own. 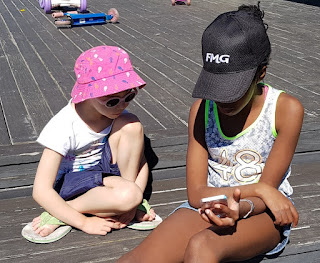 Ruth enjoying some time with Asher in the sun. Such a cute photo. 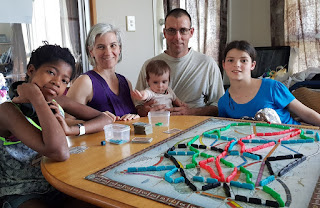 Another great photo by Hezekiah. It was nice to have a game with Dad this afternoon.
Rachel was in town for work this afternoon and so stayed over in town.
Asher had a seizure this evening at 8:30. She fell off her bed when it started but thankfully didn't seem to get hurt from the fall. That's only the 3rd one this month, so it's been a good month for her. 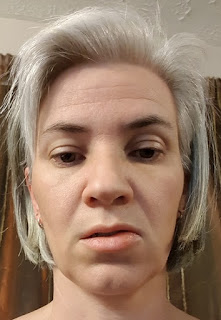 Sunday 23rd: Yesterday afternoon my lip started swelling up. At first I wondered if I had been bitten by something outside. A few hours later though, it was down. Unfortunately in the early hours of Sunday morning I felt the swelling come back. And this time it got even worse. It lasted a lot longer too, but by Monday it was going down. I suspect it was angioedema related to stress from Friday's issue with the children (as I hadn't eaten anything different and don't generally react to anything in the garden). Thankfully it was not at all painful, just totally numb (and rather embarrassing at church on Sunday morning).
Anastasia hasn't been sleeping well since her cold and so I have to try and break the bad habit she has gotten into of waking so often at night. It's always so draining. It's been so much harder with Anastasia than with any of the others. So I have had to regularly ask the Lord for His help to get through.
I'm so thankful for Brendon's support and the extra sleep I managed to get this afternoon.
Posted by Buckland at 10:00 PM