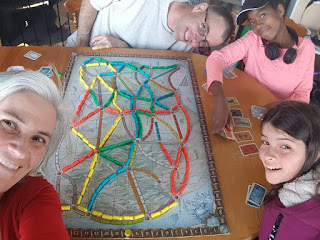 Saturday 29th: Instead of Asher just going to Rachiel's home while we are at church tomorrow (as Brendon is preaching), she went for an overnight visit too, and headed there after lunch.
This meant we could have a game of Ticket to Ride with Brendon and I both playing. 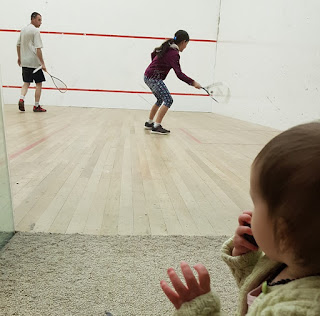 The children asked that we go to the squash courts again this evening, so we headed down again so that they could all get a bit more time practicing.
Hannah and Hezekiah have not gotten to play as often as Ruth has (she has been interested for a lot longer) and they both surprised me at how well they are both doing. 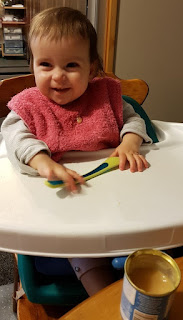 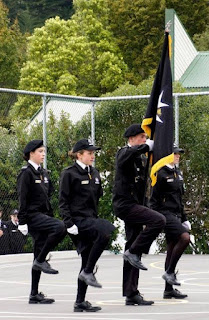 I thought I would just give some fruit a try again and Anastasia surprised me and ate half a tin. She had a good night's sleep but unfortunately would not repeat it again. Every time I tried again after this, she just spits it out as soon as it gets into her mouth. So it was just a once off...... 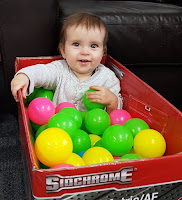 Sunday 30th: Rachel has been at District Competitions this weekend. What a great photo of her leading their drill team. They didn't place, but did really well and it was a very high standard.
With Asher away Anastasia got to play with her balls during church this morning. 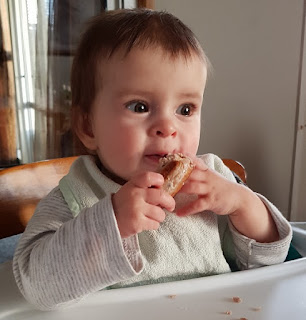 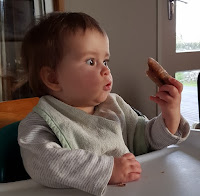 Anastasia enjoyed chewing on some sausage for lunch today. It will be so nice when some of the food can start going down her throat. :-)
Monday 1st October: It's getting a bit more tricky to get 6 smiling faces in one shot. 7 years of monthly photos taken now. I should try get a new video of them made soon. 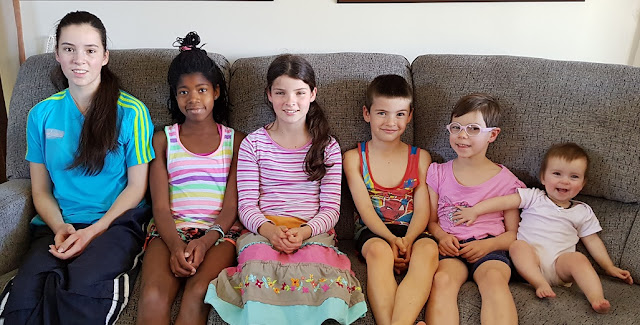 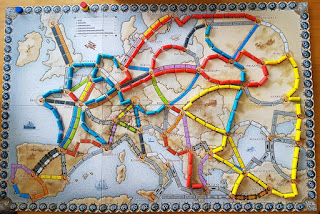 We bought our own Ticket to Ride and got the European version. It's a bit more complicated than the USA one as it has tunnels and ferries. So I'm glad we got the basics learnt first. Up till this game, I had won every game I had played. Brendon broke my winning streak though, and was just one move ahead of me in purchasing the long 8 part tunnel and won the game. :-) He was red and I was yellow. Ruth was blue. 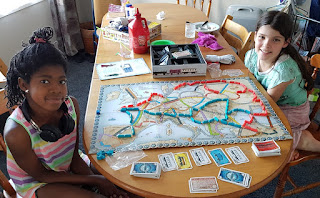 Ruth and Hannah then had a game too. Hannah is learning to go for longer trains and managed to get the 8 part tunnel. Nice job girls. 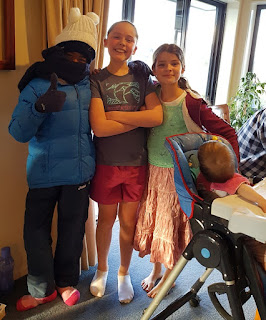 It started cooling off this evening while we were at bible study. We heard Ruth saying that she can't go outside for long as she will get swollen fingers if she gets too cold. So Miane decided to dress her up nice and warm. :-) Such fun. 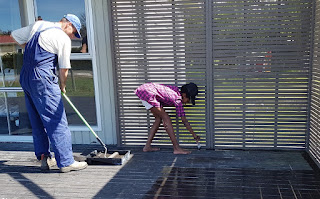 Tuesday 2nd: This morning Ruth and Hannah headed into town with me. Hannah needed to have her eyes tested again and Ruth had some shopping she wanted to do (as always). I was pleased to be able to leave Anastasia at home and managed to get home in time for her after lunch feed.
In the afternoon Brendon got started on re-staining the deck. He had 3 happy helpers too. 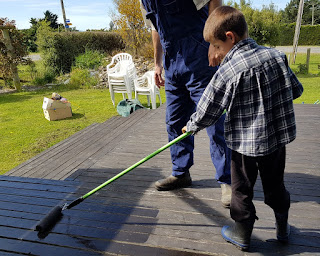 They took turns helping with the roller and the brushes. 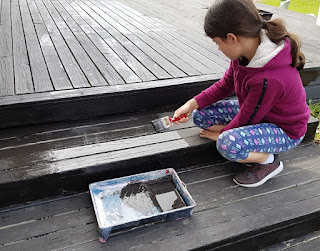 Hannah didn't see them get started, but it didn't take her long to join in.

BELOW: Ruth was helping from the start and got a bit tired eventually, so she moved to the role of entertainment.
Dad having fun and "singing along" for the photo. 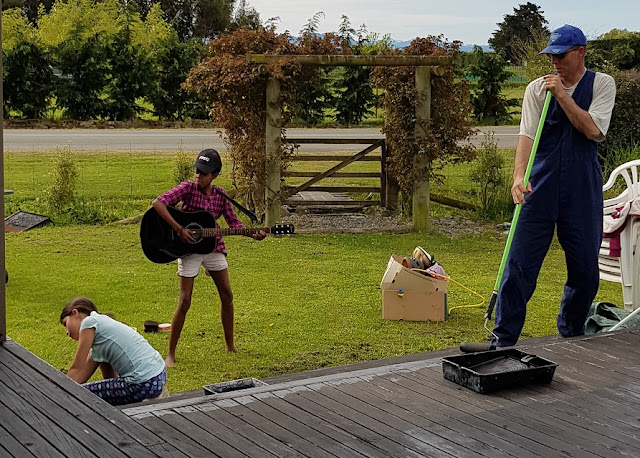 Finishing up the edges.
Well done to you all. 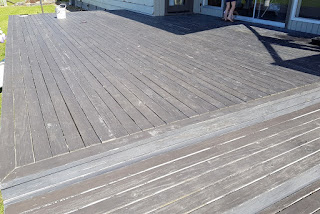 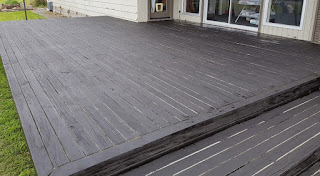 And after.
Although this photo was taken in shade - so it doesn't show the contrast as well. It looks great. 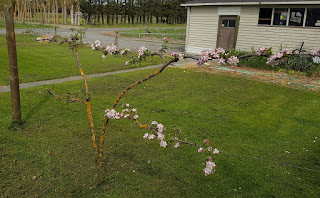 The blossoms are always so lovely to see on this apple tree. One tree at it's base, but it quickly splits into two and each side is a different apple. They blossom at different times and the fruit ripens a couple of months apart. So clever. 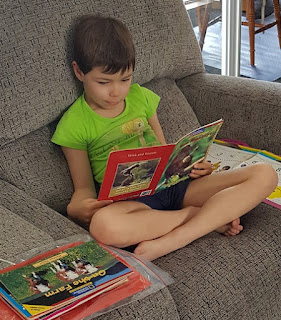 Asher picked up a book to read this afternoon, so I quickly got her pack of holiday books from school out. She went through a few of them but had one favourite. It was lovely to see how she has gotten to know some of these books a bit more and will tolerate them just that little bit more at home now.
Posted by Buckland at 10:00 PM