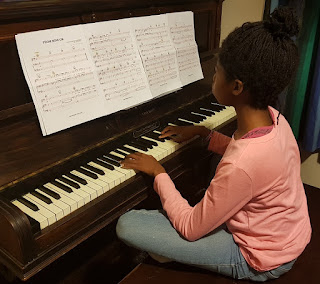 Sunday 5th: In anticipation for Ruth meeting the potential piano teacher, I asked her what song she would like me to get her sheet music for. She chose "From Now On" from The Greatest Showman. It's 16 pages long! She got started on it today. At first she wasn't thrilled with the key that it's in (it's in E which has 4 sharps - 4 black notes keys in the scale). She is getting the hang of it though. 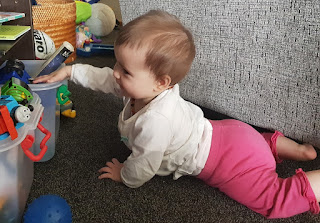 Monday 6th: I ran to get this photo when I spotted her as I had just recently been working on Asher's baby book and there was a photo almost exactly like this. So I thought it would be nice to get the Anastasia version. :-) 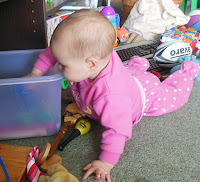 This is the one of Asher at 7 months. Anastasia has a lot more hair. And they are both drawn to the music box. :-) 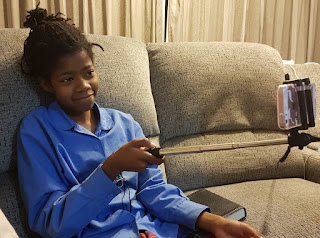 All the children have received RISE awards over the years. They get them for doing something that fits in with the R.I.S.E. values that the school focuses on. Respect, Integrity, Service and Excellence. Ruth got one last week for her Service in the 40 hour famine. She was thrilled today to be one of the 2 RISE award recipients who got drawn for the principles reward. 2 get drawn every week, and this was the first time any of our family got one. So she was very excited to be able to choose a selfie stick from the collection of rewards. 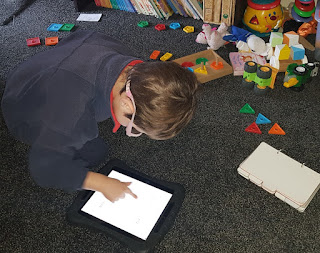 There was an app that Asher loved using at the Champion Centre that I finally decided to buy for her to have at home. It's called Special Words and uses flash cards to help children learn to read by sight. I think that this is going to be the only way Asher will learn to read. Phonics will be too complicated for her and she also has a good memory. I have adjusted it to just have a few words for her to start with. For now it's just for her to get really familiar with the app. Ultimately the school needs to decide which words they want her to learn first (in sets of 4) and we can load them up ourselves. She is just loving the app and spending ages on it. 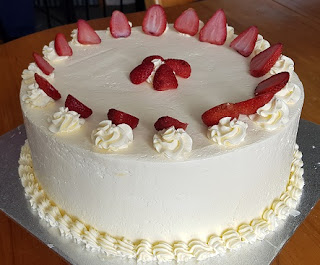 I had to smile this afternoon as she played on the app, played with the shapes, and also played with a car (it's a bit hard to see - but it has 4 blocks that come off - so they were on and off as a part of this game). She does love doing a few things at the same time.
Tuesday 7th: Rachel baked cakes yesterday to take to the St John Prize giving this evening. The tops that needed trimming got some extra white chocolate ganache on them and added to desert for bible study last night. It was really delicious. I didn't get to try the sponge cake when she made it last month, so I suggested she make it again, this time in the size that she will be doing for the wedding cake in February. 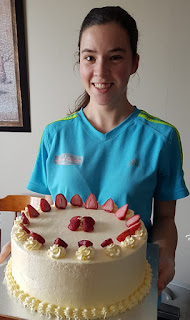 It's a rather big cake, so we took a photo of Rachel holding it to show how big it is. Thankfully it only has 1 tablespoon of wheat flour in each batch (this was two batches), as it's mainly cornflour. So for our family it can be seen as wheat free enough for us to eat. Hezekiah is the most sensitive and he didn't even want to try any - so that worked out ok (there was ice cream last night - so that wins over cake any day for him).
The only tricky thing now is that the bottom tier (even bigger than this) is a wheat based chocolate cake. So we may have to find someone who wants to buy a huge chocolate cake off Rachel (at cost price) in the next couple of months, so that she can have a practice run with that layer too. 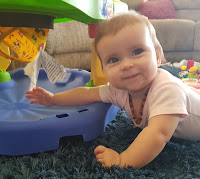 Anastasia decided she wanted to chew on that label on her excersaucer seat. It was a bit hard to get to buy she persevered. Such a cutie. 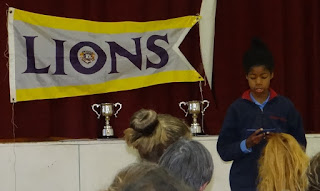 At 3:30 I took Ruth up to the hall to enjoy afternoon tea with the Lions before their bi-annual speech competitions. The speeches started at 4:30 which I managed to get to. I got to listen to the only senior entry but then had to go home to feed Anastasia. I then headed back and they were just in a small break before the Junior Sections started. 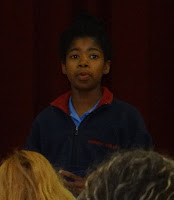 I was concerned I wouldn't get to hear Ruth as I needed to leave by 5:30 to get to the St John prize giving. One of the Lion's members suggested I check when she was speaking and ask if she could be soon. They had done a random draw for places, but thankfully the person who was supposed to be 2nd had not arrived, so Ruth was able to jump into that spot. 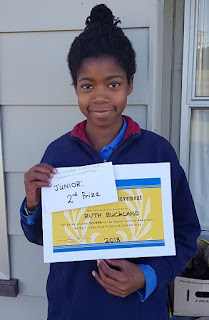 So I not only got to hear her, but she was then also able to come with to the prize giving. She was sure she wouldn't be getting a placing, and really wanted to attend the prize giving. So the timing worked out perfectly. It was a pity to miss the other speeches, but was just a rather full day for us.
We were very excited to hear later that Ruth had in fact won 2nd place. She missed being in the group photo they took on the night, but the lady from Lions came around on Thursday to congratulate Ruth and give her the certificate and prize. Well done Ruth. 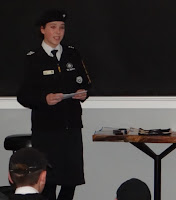 Even though we left a bit later than I had hoped, we managed to get to the prize giving on time. Ruth and Hannah joined me. Rachel had already been here for over an hour helping set things up. She was running the prize giving this evening. She did so very well. She looked very clam, even though she had some last minute extra VIP's arrive (whom she needed to introduce to everyone).
Great job Rachel.

There were loads of badges presented and then they moved to the promotions. Rachel received her Cadet Leader today. The highest rank for someone under 18 in St John cadets.
I love how happy Jo looks. I know they were very proud of her. She learnt afterwards that not many people actually achieve all 3 levels. 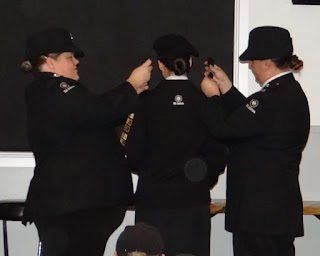 Often they skip one and go straight to Cadet Leader when they get close to 18. So a great achievement to gave gone through all the ranks.
Here Carrie (current DM - District Manager) and Jo (previous DM) are putting her new strips on.
This was really special for Rachel. 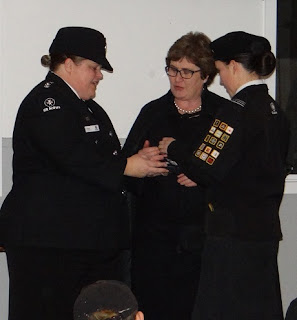 And then Rachel received her Grand Prior. This is a very special award and they need someone of the order to present it. Thankfully Judith Hoban could attend tonight. She is a Dame Grand Cross.
This is a nice photo as you can see her old brassard - filled with 15 gold badges (she only needed 12 for this GP award along with 100 service hours). Not many of the cadets will have a gold filled brassard. You collect green and blue badges first and then from the age of 13 you can work on your gold ones. Rachel wanted to make sure that she had as many gold badges as she could.
The photo we took at home later (below) shows her new brassard with the GP patch. She also received a beautiful silver embossed batch that she will be able to put on a different top that she will probably get next year. 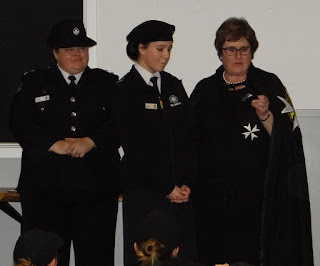 I got goosebumps when she received this award because all the leaders and VIPs stood to applaud her. It was amazing. I get goosbumps again now just thinking back to it. It was so very special. Carrie had tried to get the cadets to stand too - but they missed her signal. :-) 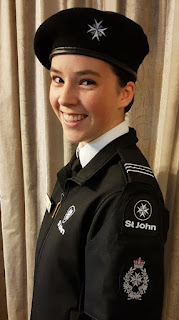 Judith then turned Rachel around and spoke about what an achievement this was. How much work she had put into it as well as the support from her family to have made this possible. It was very special.
Well done Rachel. We are so proud of you and the hard work and commitment you have shown in reading this goals.
Posted by Buckland at 10:00 PM