Crawling, teeth and netball season over

Wed 8th: Ruth was excited about getting her own Math's workbook. They don't need to own a copy, but it makes it much easier and also allows her to work ahead if she wants to. She is year 8 this year, and doing year 10 work already. And a young year 8 too. Well done Ruth. I'm so glad you can enjoy Math with me. :-) 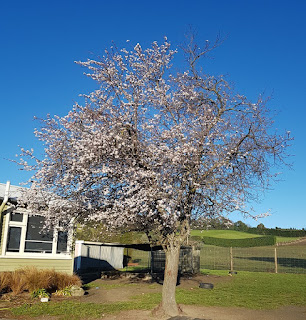 Thursday 9th: It's a great help having Megan take the children to school on Monday and Wednesday morning. Rachel also helps with a lot of the other school trips. On Thursday morning though, Rachel is working, so I have to pack Anastasia up and head up with them all. What a stunning morning though. I quickly took this photo as I left her classroom. Spring seems a little early this year. 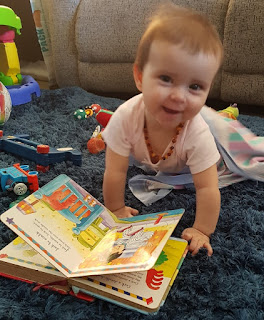 Anastasia enjoying some of Asher's favourite books.
BELOW: I wanted to get a video of Anastasia's new forward movement. A proper leopard crawl now. And I was so impressed when she got up on her knees for a bit too. It won't be long and she will be crawling around very quickly. As it is she can get all around the room very easily. 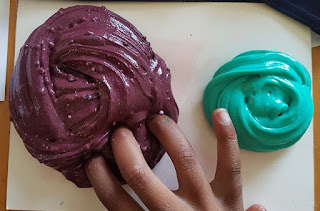 Ruth was a very happy girl today as her friend gave her these two slimes. Ruth does love slime. And these were such lovely colours and the purple one was also very unique with the bumps in it.

Ruth had a very fun audio for us to listen to. They are learning about recording in Music and so their teacher had let them listen to this. Have a listen here (but use earphones).
It's brilliant. She had me listen first and I was convinced the children had put something on really loud in the room next door. Then it was Brendon's turn, then Hannah and Hezekiah. 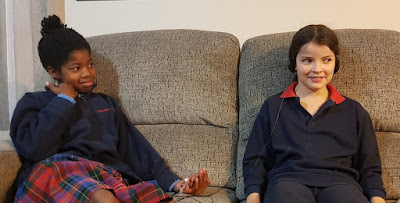 Hannah was so funny. She kept looking around.
Our ears and brain truly are amazing creations. Such fun too. 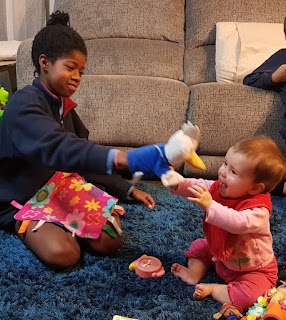 Such a lovely photo. Such pleasure on Anastasia's face.

We had a bit of a jolt this evening just before 8pm. Only a 4.3 but it rattled the house and Hannah. It's been ages since we last felt one. 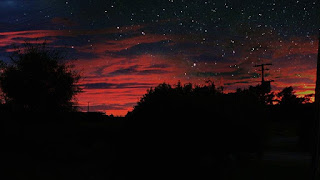 Friday 10th: Ruth took a photo of the sunrise this morning but added a star filter on her phone. A very pretty picture, even if there is some artistic licence in it. :-)
Asher had a seizure around midday today. It was almost 2 minutes, so a little longer than most of the recent ones. It made me realize though how long it has been since a long seizure (over 3 minutes). It's been over 16 months. So we are very grateful for this. She also had a lot of violent arm movements after the seizure and it reminded me of how we used to get that every time but she hasn't had that in a while too. Hopefully it's just a once off and doesn't happen too much again. 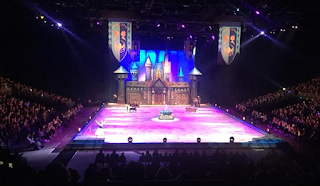 Rachel headed off this morning to have lunch with a friend and then work at the Disney on Ice. She didn't get to see any of it as she was working as a cashier, but she was excited about just being a part of it. It's fun to see all the girls dressed up for their special outing.
She called me after her shift to share her excitement. There had been a mother come and ask if there was a first aider. Rachel said she had first aid training and offered to see if she could help. 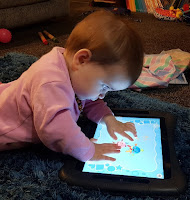 She gave the exact advice that was needed and the mother came back after the show to thank her. She was so pleased to be able to use some of her training in a "real life" situation to help someone.
Anastasia sees Asher on an iPad so often, so she is very interested in it. She loves the Giggle Gang. This must be the youngest I have had a little one on a device. How things change. 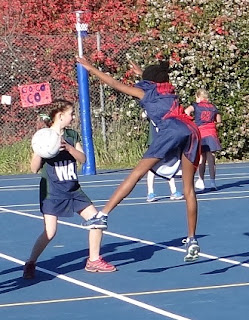 Saturday 11th: Final netball day today and wonderfully it was in Hawarden today, so I managed to get up to watch. 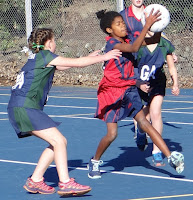 Great jump Ruth.
I was great to be able to watch again as I could see how much Ruth has improved through the season. Well done Ruth. 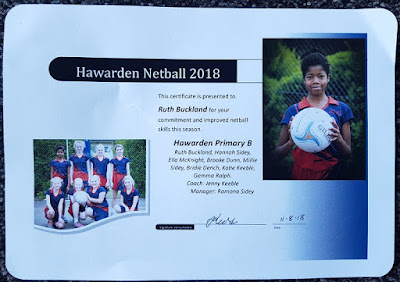 And then at 5 they had the prize giving for the club. Ruth's certificate said "for your commitment and improved netball skills this season."
For not having ever played before, she did very well this year and we are very proud of her. 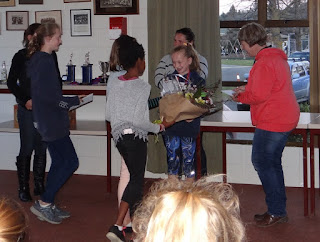 Great to be able to give their coach a couple of gifts to as a thanks for all her time and effort. 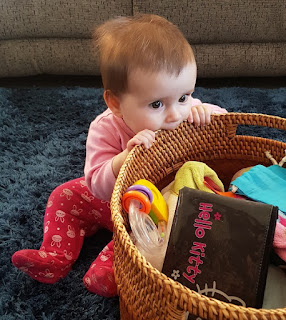 Sunday 12th: We sorted out this toy basket and Anastasia decided the basket was a great teething ring. :-)

She finally has a couple of teeth through. The top left and bottom right. 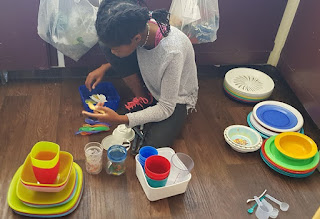 Some other sorting out that happened was in two of the kitchen cupboards. We had way too many mugs (some very old ones) so Ruth went through all the mugs and all the plastic things. She did a great job sorting it all out and repacking the cupboards. Nothing like some extra little jobs to earn some bonus pocket money. 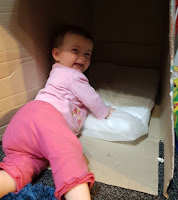 Anastasia is getting really good at crawling forwards now. Rachel was surprised when she saw her crawling forward at church this morning. Rachel keeps feeling like she goes away for a bit and comes back with Anastasia having learnt something new. She has gotten really quick at getting around the lounge now and this evening decided a couple of times to head over to Anakin's box.
So although a couple of little jobs got done, it was still a nice relaxing day to end the week. Rachel stayed with friends after church and then went to a worship service with them in the evening. As they were after 10pm getting back, she just stayed over with them and came home in the morning.
Posted by Buckland at 10:00 PM