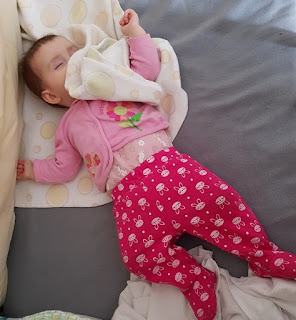 Tuesday 31st: Anastasia didn't have a great night and was really restless. I wondered if it was because she couldn't move much (as she sleeps swaddled). So today I tried to see if she could have a nap without being wrapped up. She eventually fell asleep, but woke after 45 minutes and I had to wrap her up to get the rest of her nap. I think the restlessness is more related to teething. We can see the top teeth are really close now.

(The funny thing was that the bottom teeth actually broke through by the end of the week. So it was the teeth, just not only the ones we were watching.)
She loves this ball. There is a song on the Cedamont Kids (I'll be a sunbeam) where the girls play with balls. 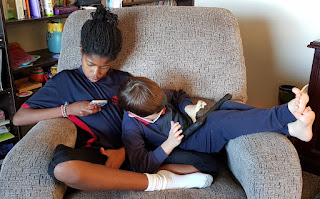 She gets very vocal when that song comes on and now we know that she just wants to have her own ball for the song. And this one is it. I just love how she holds it with her feet as well as her hands which is seen even more when she is lying down and holding it. So cute.
LEFT: Ruth and Asher enjoying some chill time after getting home from school. 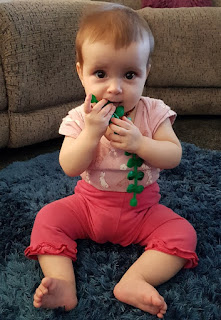 LEFT: Doesn't she just look like a little doll? Such a cutie. 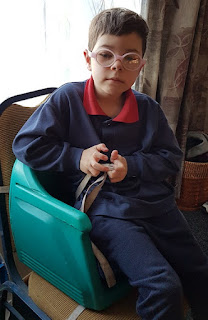 RIGHT: Asher spotted Anastasia's high chair and remembered sitting in it herself and enjoying clipping and unclipping the belt. So she enjoyed clipping for a bit. 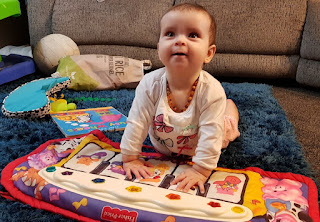 Wednesday 1st August: Another thing that Anastasia now enjoys (that Asher still plays with often) is this musical keyboard.
I had a very busy day today with deciding to deworm the whole family. Not something people talk about much, but something that is very common in South Africa. I know many families who just deworm the children every 6 months. It's different in NZ, but there are also families who do it regularly here. 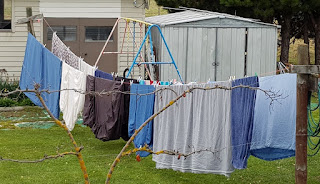 Our main reason for doing it this time was because Hannah has been eating like a horse. I remember so clearly when I was a child, that when my brother started eating loads, we would get de-wormed. So we will see if this is the cause of her huge appetite (she out-ate the two big boys on Friday night). 5 loads of washing today and all the floors done. I did the towels last night after the last shower. It's never ideal to have to do all the bedding for the household in one day, but thankfully the rain held off and I managed to get it all dry by Thursday (with the last load going on Thursday morning). 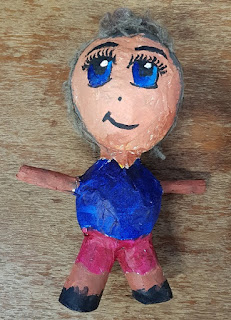 I had to rotate things and as soon as they were almost dry they came in for a final dry at the fire and the next load would go out.
We had a busy afternoon with Hannah's Student Led Conference at 3:14 and then from 4 to 5 we met up with all the different teachers Ruth has this year. We got to see this creation of hers from art. They had to design the character and then create it. I love the eyes.
It was a nice time to catch up with the different teachers and hear from them how she is doing. She is a very multi-talented young lady and is doing well in all her classes and is a pleasure to have in class. We are very proud of her and thankful that she is working so hard at school and is so successful in all that she does. 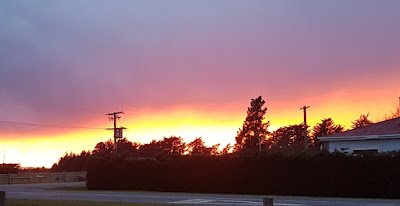 Thursday 2nd: We have been enjoying many beautiful sunrises lately. I asked Hannah to go out and get a photo of it this morning. She didn't know how to zoom in, so it's not a great picture of what our eyes saw. The colours were magnificent.
Yesterday was too busy for the children photo, so we got that taken this afternoon. I love how Anastasia was playing with Asher (and am very thankful Asher didn't push her off). 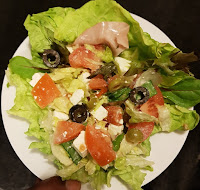 Asher had a seizure at 1:35 today. She slept so long afterwards that she was still asleep when I fetched the children at 3. I'm glad she could get that good sleep afterwards.
Ruth made a delicious salad for dinner this evening. I added some left over chicken and it was a complete meal for me. So enjoyable. 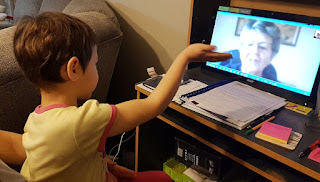 The Ministry of Education co-ordinator is making books up for Asher and asked for photos from at home. As she speaks to Nana every week, I thought I would take a photo this evening. If we even mention Nana she will go over to the computer and expect to talk to her. 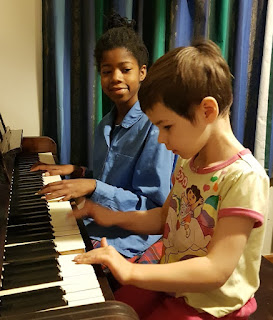 One of the things that came from the Parent Teacher meetings was that I got the name of a piano teacher that comes into our area to do lessons on a Friday. She doesn't have any gaps at this stage but will have one next year. She is happy to take Ruth from where she is and help stretch and help her grow. She will sit and work out songs herself, so I want her to be able to enjoy that freedom and also take it to it's full potential. I'm not terribly worried about her reading music. This teacher is happy to help push her to her full potential and just work really slowly on the music reading side of things. So the talk has gotten Ruth more motivated in her playing and has done a lot more practicing this week. Her latest creation is one of the songs from The Greatest Showman. So fun to listen to. We just need to get the piano tuned as there are also two notes that are not working (which is a real pain). 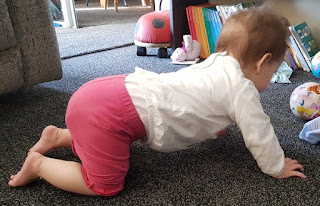 Friday 3rd: Just so that you know she does get herself into a perfect crawling position. It's just more "safe" to move her hands backwards, underneath her body. So she ends up going backwards. 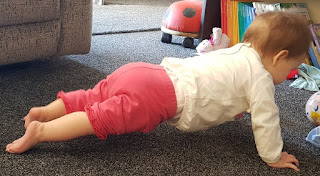 When she really wants to go forwards she knows she has to do something different and so she tries to push herself forward by going up on her toes. Such a strong plank. She has the tummy muscles strong enough, she just has to realize that moving those hands forward won't throw her totally off balance. I'm so pleased I got a photo of this stage though. It's so funny and cute to watch. 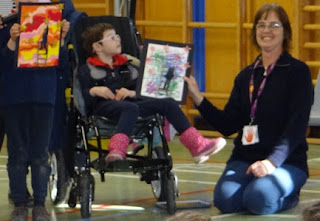 It was nice that I could leave Anastasia at home this afternoon and attend the assembly without distraction. Asher is still not really interested in showing off her work. It may be something we just have to not bother about for a while as she got quite agitated after this. 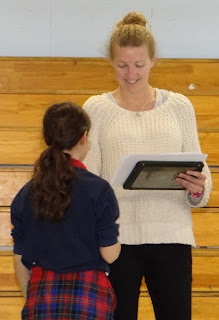 Well done to Hannah for getting a certificate today.

It said: For great effort in reading with your "ITTM" (I think that means). 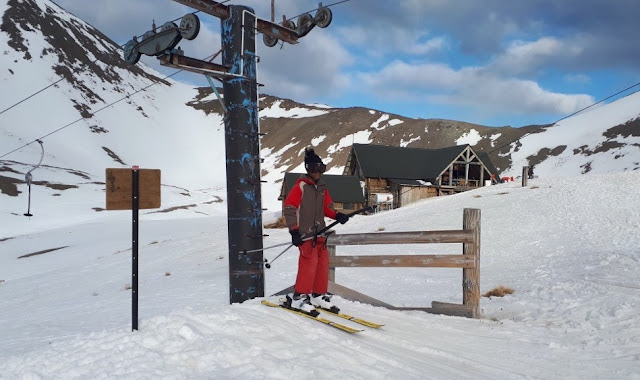 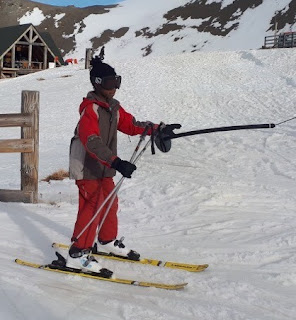 Ruth left early this morning to join in the school ski trip. So she is officially the first one in the family to go skiing.
She had her camera with and took some photos of the surroundings (which I still need to get from her) but she didn't take any of herself. So I was very pleased when the teacher said he had ones of her. And such great photos too.
What a great experience.
We are also very thankful to friends who lent Ruth loads of appropriate ski gear. 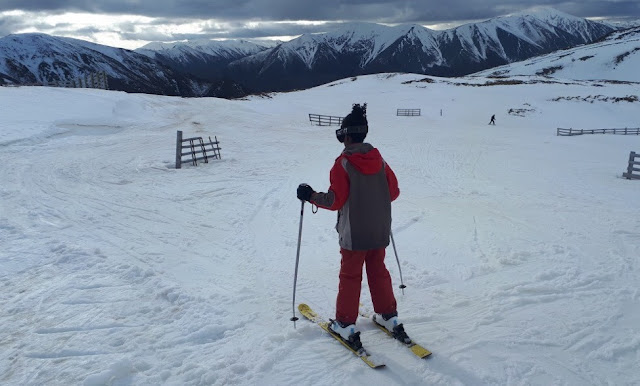 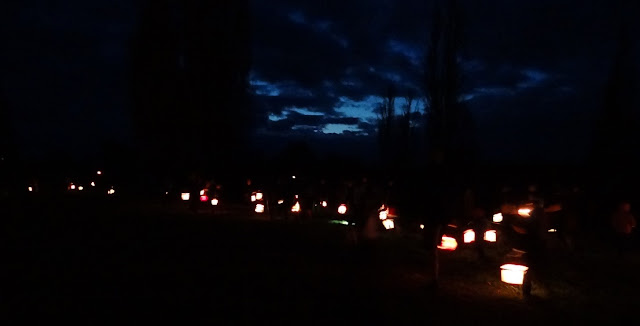 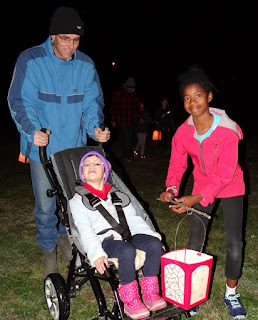 Ruth got home just in time to change and then we headed out to the Lantern walk. We arrived just in time for the older children to go join in the start of the walk, but by the time we had the buggy set up and Anastasia in the pouch, the group had left. At least the older 3 got to go on the full walk. Rachel wasn't with as she was helping with some St John competition training. We had planned to bring the car down to the Mill (where the walk ended for a story and soup) but the car got stuck in the mud. So it was a bit stressful until we had gotten Asher's bag of toys from the car. She was really unsettled and we were so pleased that her Dora cards helped her settle so quickly. The room was very dimly lit and very noisy, so she did very well (once she had her familiar things). Anastasia then got tired, so we headed home with the younger two and the older ones stayed for roasting marshmallows. Thanks to Noor for giving them a lift home at the end. 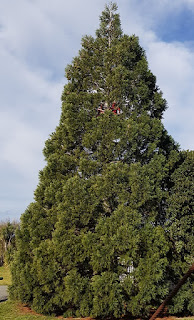 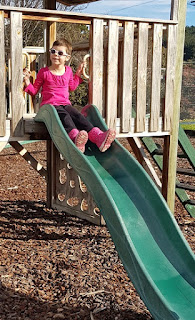 Saturday 4th: A nice afternoon walk up to the park again today. Hannah and Hezekiah decided to climb this tree. You can see the red from his spider man suit two thirds of the way up. Hannah was just to the right. They were at least 2 stories up, so I wasn't wonderfully comfortable until they were back on the ground.
Asher enjoying the small slide. Thankfully she didn't want to attempt the high one. My dislike of heights had already been pushed today.

Hannah always does different things on the flying fox. So I was really pleased when she kindly helped Hezekiah to be able to get on backwards.
He also realized that if he starts off sitting forward (which he can do on his own) he can then quickly stand up and then hop around to be facing backwards too. :-)
Rachel had her Amberley work and then headed into town to work at the Rugby final. Although the stadium was packed, it wasn't as busy for her. She says that perhaps because the tickets were so much more expensive, people didn't spend as much on food and drink.
She then stayed with a friend in town and went to church with her in the morning, had lunch together and then headed home in the afternoon. So it was a lovely opportunity for them to have the time together.
Posted by Buckland at 10:00 PM