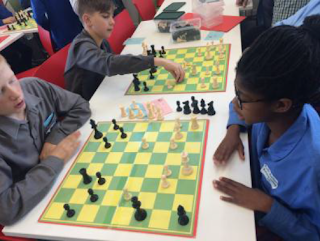 Tuesday 26th: Ruth spent the day in town today with a few other children from her school at a chess competition. This photo was in the newsletter this week. Well done for trying something different Ruth.
I had Asher's speech therapist visit this morning. She has a talking device and Mary needed some training on it. So I gave her some basic training and we discussed how we can get it used more. We had a good meeting and although I know it is a long term help for Asher, it is exciting to see how much it can help her. 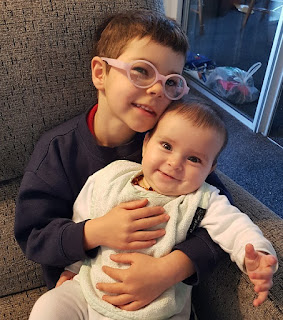 There are days where speech is harder for Asher, and times when we just have no idea what she is asking for. So having this device working well for Asher will be a huge blessing to her. I'm sure she will catch on to it quickly, as I saw how quickly she took to it when we did an intensive trial over a year ago. It just needs regular practice and a logical approach to make it practical and useful.
Ruth often tries to get Asher to hold or cuddle Anastasia. Today was very special as when we tried to take Anastasia off her lap, she pulled her back. So nice to see Asher enjoy a cuddle with her. 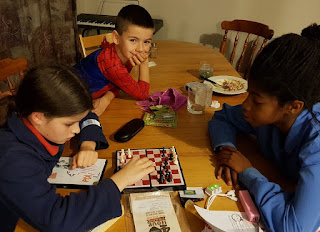 Ruth was still in chess mode this evening, so our chess board game out for some use. 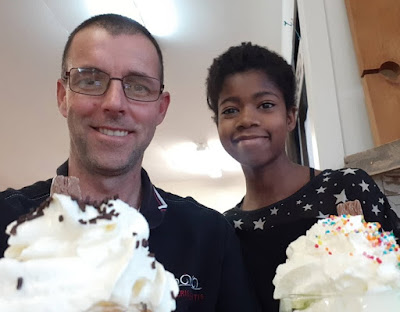 Wed 27th: Rachel had a full day of work in town today. She left before 7 for the 9am start and was only back around 5. She is so thankful for the longer shifts that she can get and this was nice to be during the day. It was at the Air force museum and they served over 600 guests.

Ruth and Dad headed to the tea rooms this afternoon. 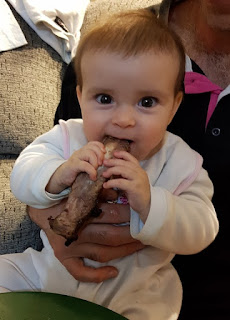 Anastasia enjoyed chewing on a belly strip bone this evening. I'm so pleased we have avoided the baby food stage and can slowly get her onto real food as she shows interest. This was already a great start, getting a different taste in her mouth and learning what to do with tiny bits of food that she gets.

Thursday 28th: It's been 3 years since the first appointment with Life links - an organization that takes care of full time carers. I have been getting carer support hours through them over the years and they have increased each year. When my case manager called last week and asked if things had changed much over the last 3 years, my answer was a definite yes. I had thought that things would get easier this year with Asher at school, but I was wrong. In many ways, this year has been even harder. I think the biggest thing that I was not prepared for, was the high amount of care that she continues to need. Not just the constant supervision for seizures (which I do now get a break from) but the continued basic care that she needs. She still needs to be dressed in the morning, she needs help eating her breakfast, brushing her hair, putting her glasses on. All the things that a normal 5 year old can do, she can't. And it's draining. I knew that more carer support became available once the child turns 5, and now I finally understand why. 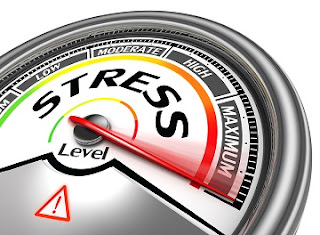 It was a good time of chatting too as my case worker has her own special needs children (who are now grown up). So she has been where we are and she really does understand the struggles. Her son has seizures too, so she understand the stress that this puts on parents. She described it in a very helpful way. She said that while most people have stress levels around 2 or 3, we live with stress levels at a constant 9. So whenever the smallest extra thing happens, it's too much. For other people it can rise quite a bit, even getting up to 8 or 9, and then they can recover and get back to their normal 2 or 3. For us, we don't have much room before we are maxed out. It's helpful to see it like this and a helpful way of explaining to others why things are hard for us. It's also a very real reminder of why we need to put things in place to try and reduce those stress levels. Our one plan (that I shared with her) was to try and get Brendon and I to go away for a night each month. She was very pleased and said I must put a priority on this. 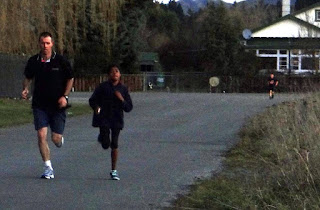 She also said that it was only because of the effort they put into their marriage that has kept them together. She said the odds are against us as many couples do not cope with this stress and divorce is very common. So it was a great time of encouragement and good to also discuss practical strategies for us to put in place.

Brendon, Ruth and Hezekiah headed out for a run a bit later today, so with it being so cold Rachel decided to rather stay home and have a ride on the stationary bike.  Ruth did really well and got 6:12 (I know it was at least 6:30 last time). 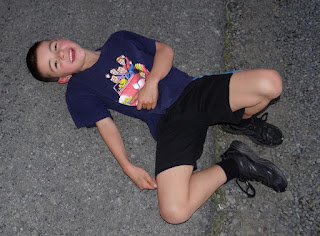 Hezekiah did amazingly well though. I could see him not far behind them and called out encouragement and so he kept pushing. He was just under 8 minutes last time, so we were really impressed with his 6 min 48. Over a minute off his time.
He was bushed though, and his ears were so red (probably because of how cold it was out there). Good job to all of you. 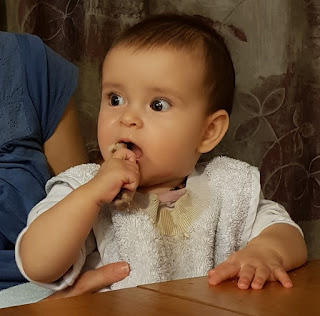 Anastasia had eyes for Dad's food this evening, so we gave her a chicken bone to chew on and that kept her happy.
Friday 29th: Asher had 2 seizures at school this morning. The first one around 9:30. She got back to the classroom just after 11 and within just 10 minutes or so had another one. She was looking so good when she came back to class that it was quite a shock to have another so soon. She fell with that one and bumped her face, thankfully just missing her eye. The school called and I agreed that I should rather bring her home. Then I could make the call on if she needed extra medication ect. By the time she woke from her nap at home after the 2nd one she had a fever of 38.8 so I gave paracetamol. She ended up getting an extra dose of medication through the afternoon as well as a dose of Midazolam at 6pm as she was looking really bad. 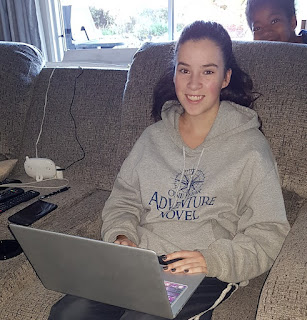 Brendon took her to the doctors in the afternoon to just make sure we were not missing something obvious as to the cause of the fever. Her urine and ears were fine and she wouldn't let them look at her throat. Thankfully the fever was gone by Saturday morning and I think the dose of Midaz helped just break the cluster and she didn't have any more seizures through the weekend either. So we don't know what the cause was but are really thankful it was over so quickly. That brought her total seizures in the month to 7, till a good month.
Rachel's new laptop arrived today. It's nice that she can enjoy the fruit of her labour and buy things with her well earned money. She was very excited about getting it set up today and it's been a help in motivating her to get her school work done too. She is on track to having her NCEA Level 3 done this year, and perhaps even within the 3rd term. 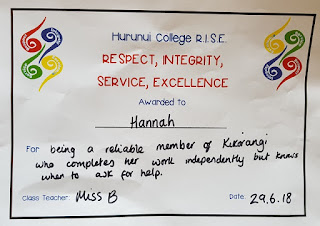 Hannah got a certificate at the singing assembly this afternoon for "being a reliable member of Kikorangi who competes her work independently but knows when to ask for help". Asking for help was one of her goals at the last goal setting conference, so this was a great achievement. She was often too afraid to ask questions as she didn't want to be laughed at. So the fact that she is better able to ask for help when she needs it, is a great improvement. Well done Hannah. 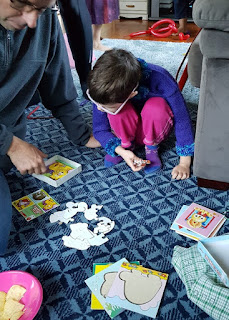 Saturday 30th: There were 2 parties on this afternoon. We dropped Hezekiah at his and then headed to the one that Asher had been invited to. We were not sure if she would even be happy to get out the car, so it was in our minds a very successful afternoon. We did have her bag of toys which was a big help, and at one point we grabbed a little bottle of bubbles to help calm her when she had gotten a bit stressed.
Both the parents work on the same farm as Brendon (although in different sections) so it was nice for us to get a bit of time to chat to them. I'm pleased Brendon had suggested we go. I had thought it was not even worth it. So I'm glad he got me to give it a go. It was nice to catch up with the other mothers who were there too.
Sunday 1st July: Wow - and just like that we are in July. We got the monthly children photo before heading to church as Rachel headed into town after the service. She is doing the CEF Camp again these holidays and they had their visitations today - where they go and visit the families and answer any questions about camp. So she was only back after Asher was in bed. 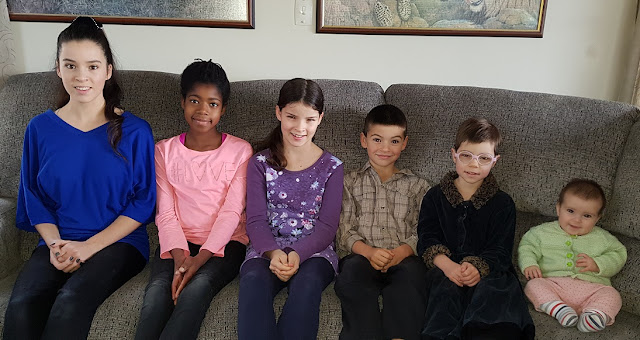