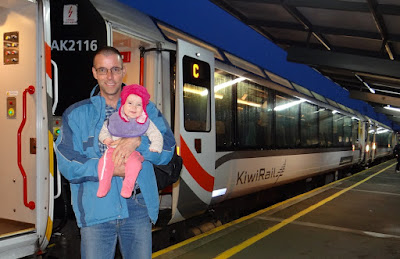 Monday 11th: As we didn't manage to book this getaway for our 20th Anniversary last year, we decided to make it happen this year. So a year and a month late, but worth the wait.
We left home just after 6am to reach the station for 7:40 boarding. Rachel came in at 6 so that we could leave Asher in her care and head off for a much needed break. 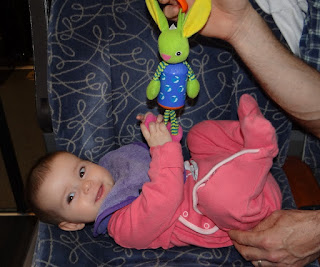 When we checked in the lady said "oh nice, they have put you at a table, that will give you more space." Not only were we at a table, but there were no passengers booked on the other side of the table. So we had 4 seats for the 3 of us. We had not paid for Anastasia to have her own seat, so were fully expecting to have her in-arms the whole trip. So this was a wonderful blessing. 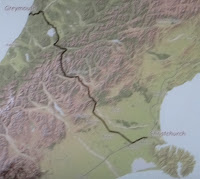 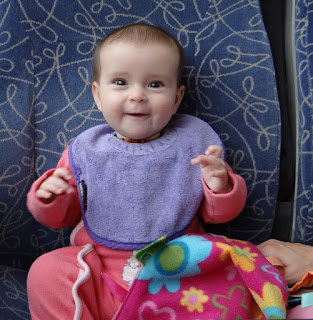 Not the greatest photo as I took it off the TV screen. They regularly showed the map and our progress through the trip as well as having audio to listen to about things on the trip (which we listened to a little on the way back).
We left Christchurch at 8:15 and arrived in Greymouth just before 1pm. So a bit less than 5 hours for the trip.

Even though there was so much snow last week, most of it had melted already. When we finally spotted some snow capped mountains, there were many of us that headed to the open carriage to get some photos.

A very dry scene. Not what people normally think of when they think of NZ mountains. :-) 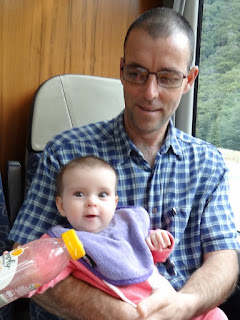 We enjoyed morning tea on the train and Anastasia decided that my empty drink bottle made a great new toy. She did try to copy me too and tip it up while in her mouth. :-) 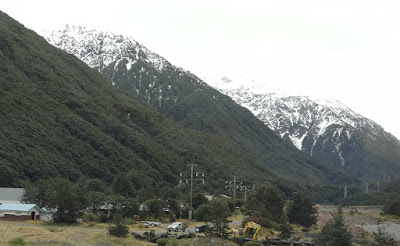 That was the extent of the snow at Arthur's Pass. 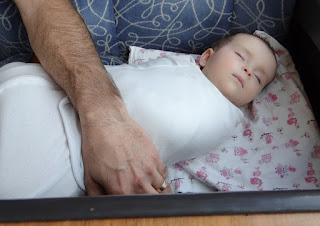 Anastasia enjoying her pre lunch nap while Brendon and I had a lovely lunch. Brendon had roast chicken and I had a lamb shank. Both were delicious.

As part of the package you could have one activity or have a rental car. As we had Anastasia with us, we decided to rather use the rental car option. So we picked that up as soon as we arrived. 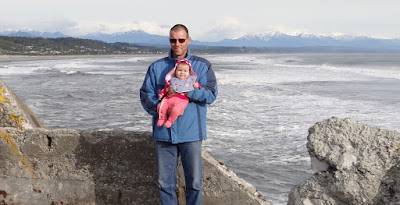 We took a drive down to the dock. 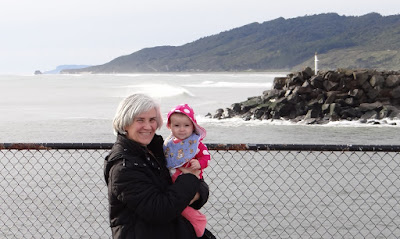 A bit chilly but no rain.

The sea is so beautiful. It was lovely to just watch it for a while. 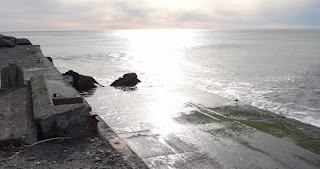 The sun's reflection was so pretty.

Part of the package was also prearranged accommodation at the Kingsgate Hotel.
Anastasia had her afternoon nap and we managed to see the sun set from our room.

We had hoped to get out to get a photo, but were just too late. This would have been a beautiful spot for the photo 10 minutes earlier. 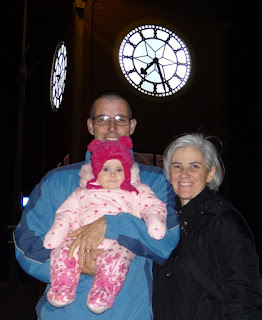 We decided to walk down to the shops this evening. It was lovely to get out for a bit and again we were so thankful for the dry weather. My back was feeling rather tight from all the travel today, so the walk did me the world of good.

Tuesday 12th: All the planned activities were for yesterday afternoon (including a trip to Pancake rocks). The advantage of having the car rental was that we could rather head up to Pancake rocks this morning, at high tide.

The ride itself was so beautiful. 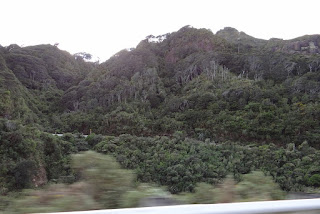 Rachel really liked this photo with the blurred bushes close to the car - so I will include it. :-) 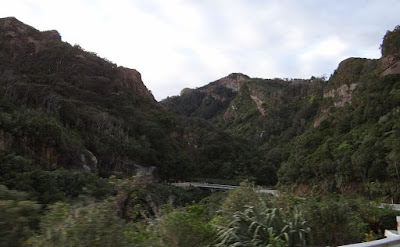 So beautiful. It reminded us of areas in South Africa. This is one of those times that a photo just does not do justice to the beauty of being there. 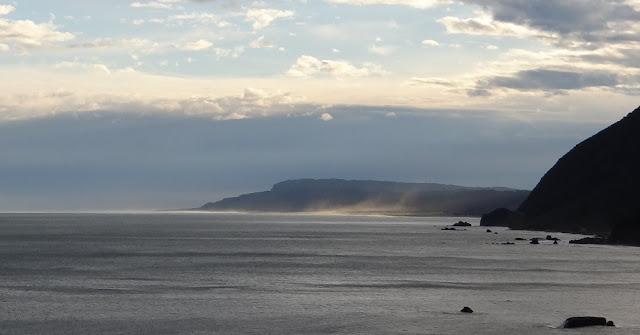 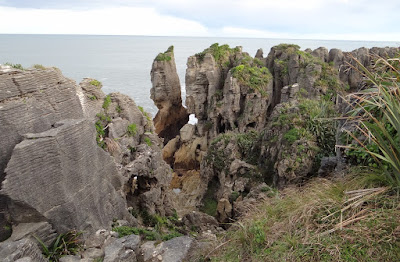 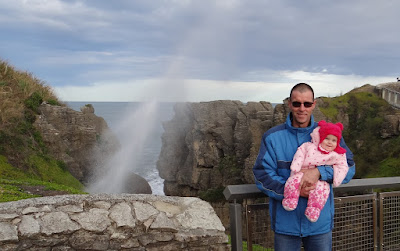 I suggested I take a photo here and then just as I took it that water shot out. What perfect timing.
Unfortunately the tide wasn't very high this time and so that was the biggest "blow" that we saw. There was a man with a very fancy camera set up that had been there for hours and he said there was nothing. So at least we knew we were not too late. 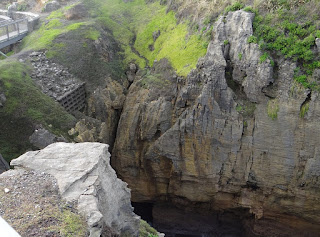 A photo from the other side (Brendon was standing at that bridge - top left corner). The blow came from that crack.

A tourist bus arrived at around the same time as us. I offered to take a photo of a couple for them, and then asked if they would take one for us. Win, win. :-) 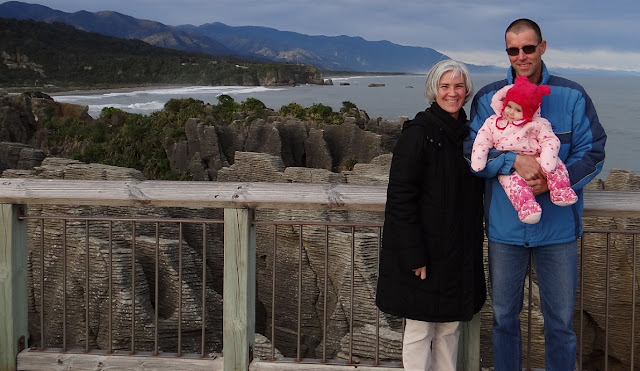 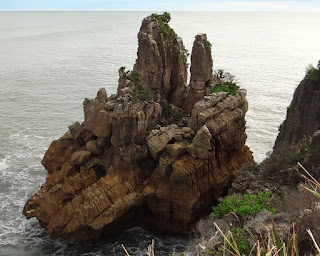 Again the photos only give you a glimpse of how lovely it was.


BELOW: This was probably one of my favourite photos - taken on my phone actually (the rest were on my camera). I had been trying to see if I could take those 360 degree photos (I don't think I can) but as I had it out I got this one and I just loved the timing with those birds in the sky. 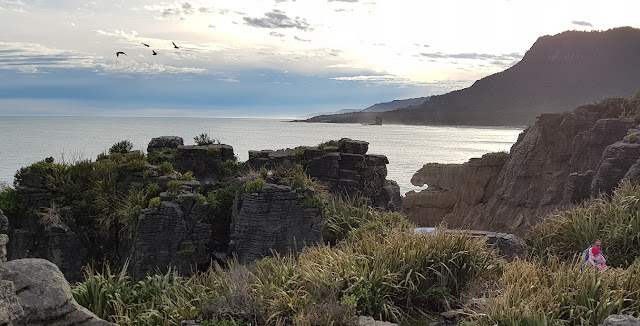 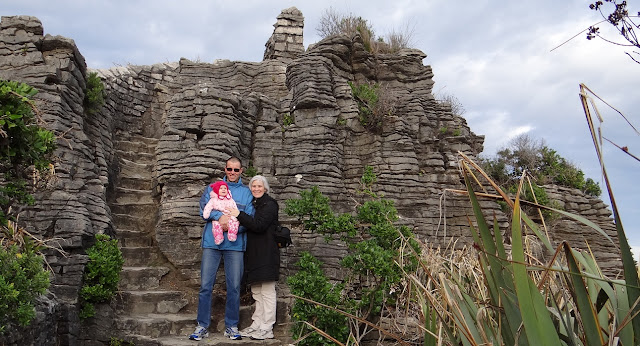 The advantage of using a camera over a phone is that you can prop it up to take your own timer photo. Nice to have another one with us all in, and what a beautiful spot.


Turn up your sound to fully enjoy the video. It was wonderful listening to the big crashes. 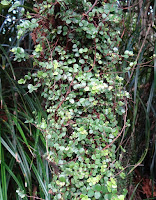 Enjoying the vegetation on our way back to the car. 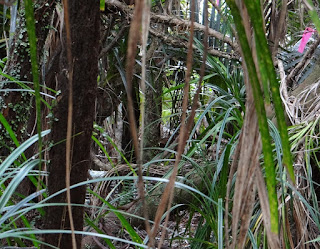 I took this photo for Ruth. We spotted some pink ribbons on our walk out but as we were in a hurry (with the high tide) we didn't stop too long. On the way back I confirmed what I had suspected, the ribbons marked were traps had been set. There was one closer to the path, and then another ribbon further in, quite close to the trap. The cage is just visible in the photo. With all Ruth's kiwi watch trips, where they bate traps, I thought she would like to see this set up. 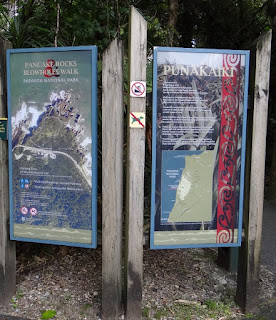 
BELOW: A map had shown "seal island" a little further along the coast, so we decided to drive a little more before heading back to Greymouth. A beautiful island, but no seals at this time.

Heading back we could see where Pancake Rocks are. So beautiful.

And just a note about the fence in the photo above. It's to stop the penguins coming up onto the road. I didn't realize penguins visited this coast. 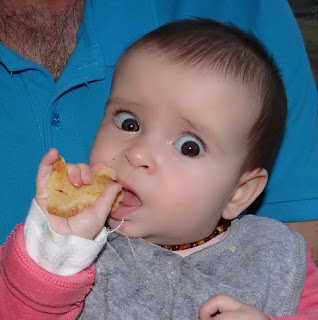 We had to drop the car off by 12, so checked our luggage (and Anastasia's car seat) in and then went to a café to enjoy a muffin and coffee while we waited for the 1:30 boarding time. The lady that checked us in noticed that we were not at a table this time, so changed our booking and got us an open table again. Again we were so grateful.
We had some left over pizza from dinner which we enjoyed today. The ladies on the train were even happy to warm it up for us.
We arrived in Christchurch around 6:30 and so were home just after Rachel had put Asher to bed (she heard us and we went to say goodnight). We are so thankful to Rachel for watching Asher and to Anna for helping with the other 3. Even though it was only 2 days away, it felt so much longer. It was so good for Brendon and I that I'm planning on trying to make it a more regular.
Posted by Buckland at 10:00 PM