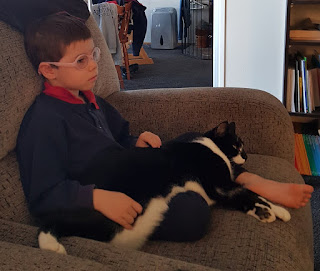 Tuesday 5th: I love how affectionate Anakin is, and it was so nice to see Asher allowing him to lie on her lap this afternoon. 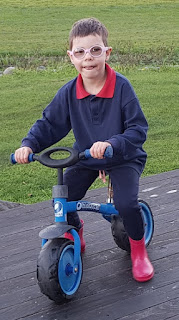 Getting some practice on the balance bike this evening. 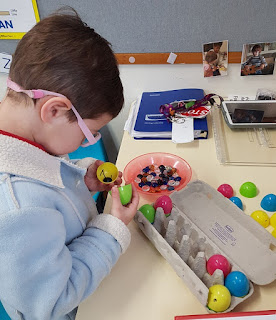 Wed 6th: I had to stay with Asher for a bit this morning while we waited for the teacher aide to finish her meeting. What a fun way to practice counting. I love that Asher brought it to me to do with her.


I had been struggling with a terrible spasm in my back since Monday, and as I couldn't get an appointment with the local physio, I just made an appointment with the chiropractor in town for 6pm. Rachel offered to drive me in as I could not turn my head properly, and Ruth asked to join us. Unfortunately it was the first time ever the chiro has not helped. I felt even worse when we got to the shops afterwards. I was glad Rachel could do the rest of the driving.
Asher had a seizure at 7pm while we were out. Thankfully just a 1 minute one again.

Thursday 7th: I really had to get photos of Anastasia reaching out for Anakin, to show Hezekiah. I had recently done his 6 month baby book pages, and I have photos of him in exactly the same position, reaching out to Patches. So it was special to show him the photos when he got home.

Lovely motivation to move. Anastasia is fascinated with Anakin and notices him whenever he is in the room. 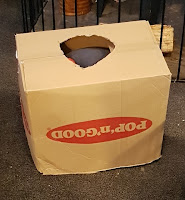 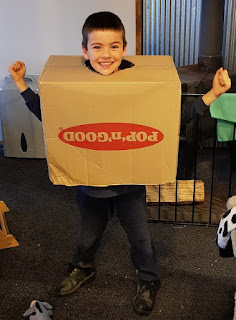 Hezekiah was thrilled when he saw this big empty box this afternoon. He was busy in his room for a while and then he came to show me his creation. He hid like this at the back door too when Dad came home. Brendon was onto it and immediately said "is there a box troll in the house?"
He was excited to take it to school the next day too. Once we had parked he was out of the car in a flash and had his box back on. As he walked in one of the Mum's saw him and said "a box troll" which made his day.

Friday 8th: In desperation I made an appointment with the doctor this morning to get some anti-inflammatories to try and ease my back pain. And then the physio also managed to squeeze me at lunch time. Brendon came home to watch Anastasia so that I could get to her. I'm SO thankful to both of them for making it happen. She helped me understand why the chiro had not worked, as it's a postural problem. She encouraged me in that it is very popular with breastfeeding mums as it's very difficult to keep our shoulders back while feeding. She gave me an excellent massage, got some needles into the worst spots and then also gave me some great exercises and stretches. So although it's not going to be a quick fix, I feel encouraged that I'm now finally moving in the right direction to ending the pain. 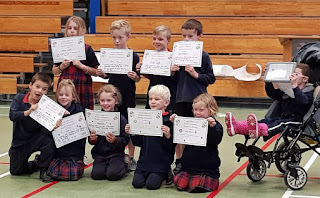 Hezekiah's class showed their art work inspired by the Lorax movie.
Both Hezekiah and Asher got certificates at assembly today. They have recently started taking photos of the children in groups like this, and so tried to include Asher. Perhaps she saw them all holding their pages up, and so she lifted her iPad and blocked her face. :-)
Hezekiah's certificate was for "working hard to do some fabulous maths by breaking numbers into bits when adding and always having a smile on his face." 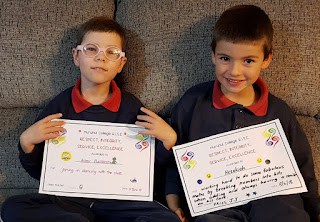 Asher got a bit more practice on holding the certificate this afternoon. She got hers for joining in dancing with the class. The teacher commented on how well she is doing in joining in with a few of their musical activities. Although Asher doesn't really understand this all, it was nice to acknowledge the great improvement she has made. And it's one more little thing to help her notice what's happening around her. 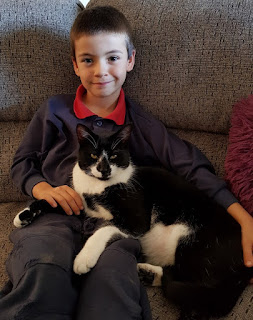 I do just love how cuddly Anakin is. He is so big though that he can't really sit on your lap and has to use the chair too. He often tries to get as much of himself on you though. Hezekiah is always willing to give him a good cuddle.

BELOW: Anastasia just loves being tickled and her laugh is just so precious. Ruth's getting the hang of this tickling too and I had fun watching them have a similar game a few days later. 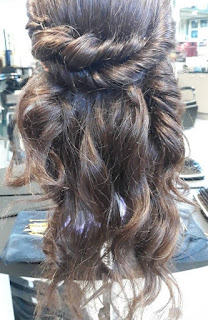 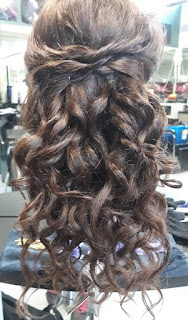 Rachel had her hair course again today. She is very excited about being asked to do her friend's hair for her wedding next year. So she got to try a couple of things today. I really like the twist on the left one and the curls on the right. 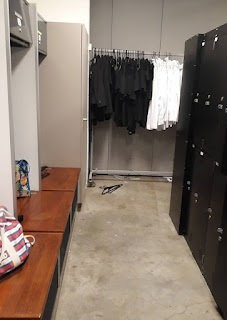 Rachel had her first non-rugby match job with vbase this evening. They were short staffed for a basketball game at the Horncastle arena. As Rachel was already in town for the hair course, I suggested she take the shift. She enjoyed the change from the cold rugby stadium. I keep asking her to take photos of where she works, but as she is always so busy (and often doesn't have her phone on her) she managed to get this photo of the change rooms. Vbase supply them with their tops, so it doesn't matter if they work a few days in a row, as the company keeps all the tops and gets them washed after each shift.
Rachel stayed in town overnight and then headed back to Amberley for her weekly café work, and then headed straight back into town for another rugby game shift. Thankfully this game was earlier than the others, so she could drive home afterwards.
Thankfully we had planned to all attend the church's movie night on Friday night (rather than asking Rachel to stay home with some of the younger ones) as the only change to plans was that Rachel didn't attend. 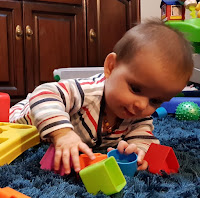 Asher did really well - watching her own music dvd (softly) at the back of the room. It was more of an adult movie based on history, so perfectly suited to Brendon's tastes. They will have a more child friendly one next month. At least the kids enjoyed the fish and chips dinner. :-) 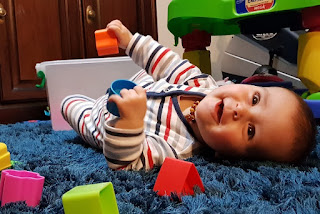 Saturday 9th: Anastasia decided the toys that Asher was playing with looked like fun. 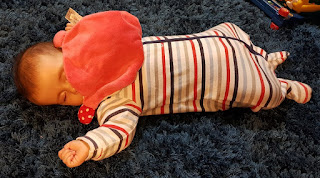 I didn't wrap her for her nap this evening, she just fell asleep with her toy / blanket thing on her face (she had been sucking one of the sides). So cute.
Asher had a seizure at 9pm this evening. She knew it was coming though and got up off her bed twice just minutes before it started. So we were specifically watching her carefully. Thankfully it was only around 30 seconds long. 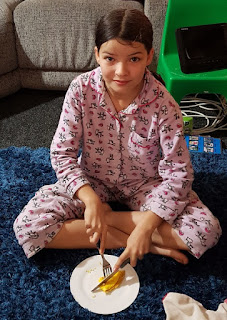 Sunday 10th: When I looked through my photos I could not understand at first why I had taken this one. And then I remembered. The 40 hour famine. Hannah went the 40 hours with no furniture and Ruth went without devices and without talking. They both started at 6pm on Friday evening (so Hannah sat on the floor through the movie). Hannah slept on the floor for the two nights and I suggested she just sit on the soft carpet to eat her breakfast this morning.
They both did well in raising money for children in need. Great job girls. 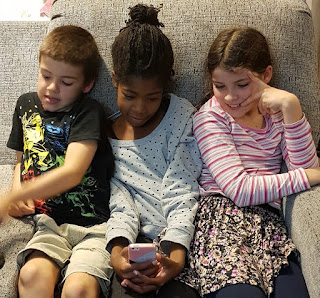 Ruth had taken her phone with in the car so that when the 40 hours were up (at 10am) she could use it. Unfortunately I hadn't checked the battery life for her and it was flat. So she had to wait till we were home after church to get her cell phone fix. She was so excited to have it back she even let these two sit next to her and watch her playing games. 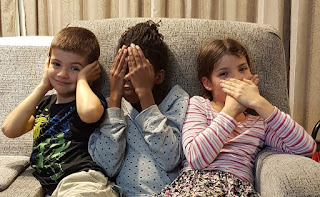 It was so funny to see all three of them on one chair that I asked them to pose like this, and then showed them the 3 monkeys that I had them copy. :-) My little monkeys.
Posted by Buckland at 10:00 PM