Wonderfully the weather cleared and there was blue sky for the cross country today. It did start drizzling just as we were leaving - so we could not have asked for better.
I had asked Brendon if he would run with Ruth. So he took a bit of time off and came to run with her (he went back to work when they were done to finish things off). It's always handy having Ruth wear her blue tutu. As our family are in the blue house, I asked Brendon to wear a blue top too. It made it nice and easy to spot them.

Once the older ones had left the younger ones get their shorter race started. Asher has gotten used to coming here to practice, but didn't understand waiting for the start - and you can see her already running off on the right. 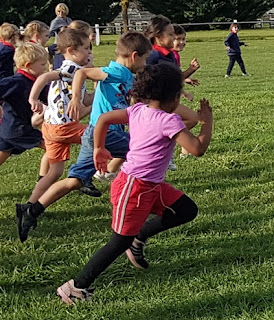 Hezekiah's blue top was also a lighter blue - so it was nice and easy to spot him too. You can also see that Asher didn't get much of an advantage with her early start. :-) 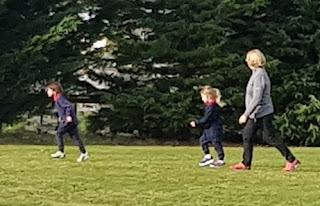 Although I am really pleased with the quality of my phone's camera - today made me realize that it's just not the same as having my camera for events like this. The zoom on my Sony Camera is really good. So I missed getting really great shots today. This was so far away that it was really fuzzy. Well done to Asher for what she did accomplish today. And thanks to Gaylene for running / walking along with her. 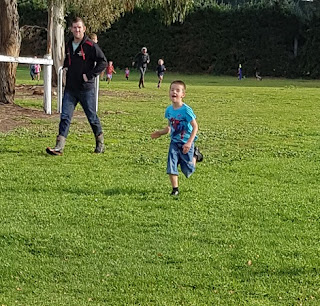 Well done Hezekiah. I think he came in about 6th. 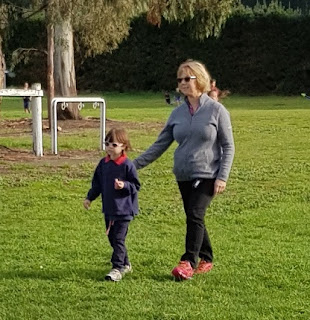 Well done to Asher for being involved and following directions on where to go. 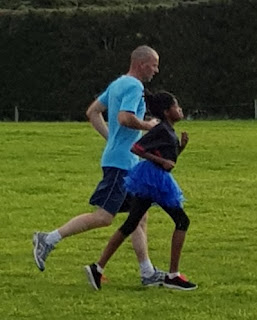 And then we spotted Ruth and Dad as they headed into the last stretch. 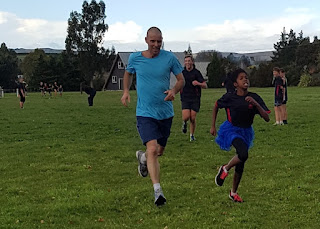 And coming up to the finish. Ruth did really well. Two years ago she came in 121. Last year she came in 63. This year her goal was to try get under 50 but she came in at 30! So she has halved her result each year. Such good effort Ruth, especially with twisting her ankle half way through the race.
Her knees were also really sore. As she came in the top few girls in her class, she gets to run at the inter school athletics next week, so we have decided we had better get her some proper shoes that will support her better (for her ankles and her knees). 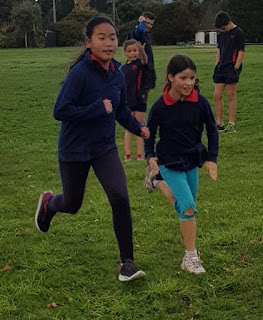 Hannah enjoyed the "walk" with her friend again. They did run for the finish but I could see Hannah was making sure they came in together. :-) With Hannah's light blue pants she was also easy to spot at a distance. 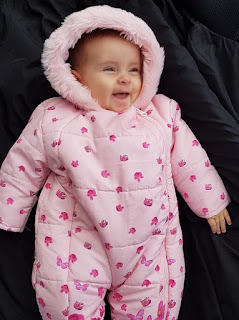 Anastasia was kept warm in her marshmallow suit. :-) She did really well being out with me. I'm so glad it worked out so well with her feeding and naps that I could attend at get some photos (even if not the best quality).
Posted by Buckland at 10:00 PM