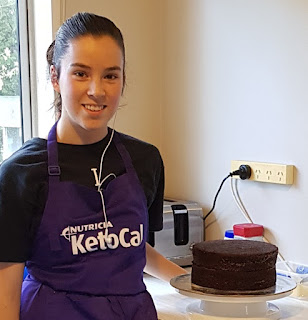 Wednesday 23rd: Rachel is very excited about making the cake for a dear friend's surprise birthday party on Saturday. With the busy weekend she has ahead, she had to get the cakes made today. She did the ganache crumb coat (which she is getting really good at now) and so that will help keep the cake nice and fresh. The icing will get done tomorrow.

Thursday 24th: I heard today about Ruth getting into the inter school cross country, so we decided we really had better get her some proper shoes. Brendon had noticed how she is wearing away her school shoes, and said her sore knees are directly related to not having the proper support in her shoes. So Ruth and I (with Anastasia) went into town this evening to get them. This gives her a bit of time to practice in them before the race next week. And the ones we bought will also be really good for her weekly netball through the winter. Hopefully her feet don't grow too much and she will get even more good use out of them once the weather is warmer. There is a plan for her and Brendon (and possible Rachel) getting out running more regularly once it's warmer. She would love to be more prepared for next year's cross country. So they will need to start early. Ruth has a lot of potential, but just needs that time practicing.
While we were out Rachel finished decorating the cake. Thankfully I'm really late with writing this blog post, as it had to be kept a surprise. 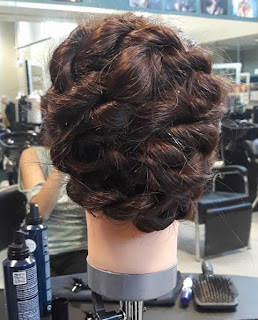 Friday 25th: Rachel left early this morning (before 7am) for her hair dressing course. She has to do 3 "hair ups" for her assessment as well as the braids they did last week. 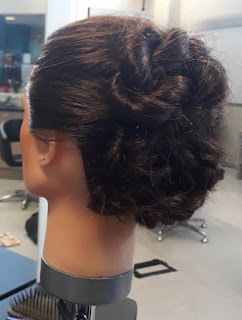 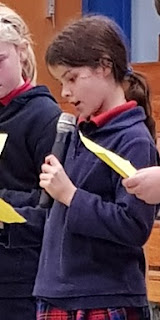 Thankfully she could drop the cake off at the party venue as she then had her first shift at her new job with vbase. She did the Dine Academy course in the last holidays, was offered an interview, and then offered a part time position. They do all the catering for Horncastle Arena and the AMI stadium (as well as other places). So she was excited about doing her first shift tonight (she works as a cashier at this stage). As she finishes after 9:30 she stayed with friends in town. She then headed to Amberley for her Saturday work at the café, and then back to town for the party. What a crazy weekend for her. But all very exciting. 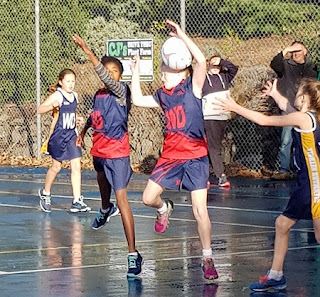 I attended the primary school assembly this afternoon. Hannah giving me a smile as her class waits to share some of their experiences from camp.
Saturday 26th: I wasn't sure if Anastasia's feeding and sleeping would work in with Ruth's netball game as Brendon and Rachel were both working. Thankfully it worked out perfectly. It was so nice for me to get to watch Ruth. With it being a home game it was so easy for me to quickly pop up. I arrived just after the game started and managed to stay till the end. 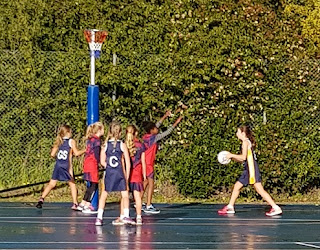 The courts were very wet from the overnight rain, but we were all very thankful for the dry morning for their games. That post looks so high for these girls.
Ruth playing defence - making use of those nice long arms. 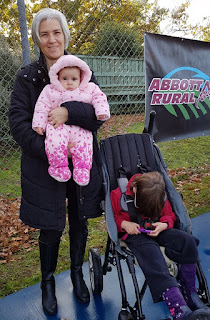 I was really thankful that Asher coped so well today (after the disaster last week). I just gave her the iPod to listen to music and she sat happily in her buggy the whole time. She would clap every now and again too. I wonder if having all the cross country practice has made her more familiar with the area? Sometimes it's a real mystery as to why she does or does not cope with things.
Hannah and Hezekiah were happy to be with too. Hezekiah enjoyed the park while we watched, and Hannah took this photo of us before we left. It seems like such a simple thing to organize to watch a netball game, but so many details had to work out and I was so grateful that they did. 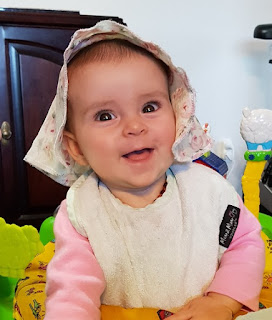 Asher had a 1 minute Tonic Clonic seizure at 3pm this afternoon. We had forgotten to give her midday medication. With her being at school during the week and getting it there, it has been harder for us to remember on the weekend. You get out of habits so easily. So Brendon and I both felt really bad about forgetting. It's just another of those times where we just have to leave the past behind and not allow guilt to grow. It will make us be more aware in future.

LEFT: Anastasia thinking it's a funny game when Ruth put Asher's blanket on her head.
Sunday 27th: Brendon preached today. Unfortunately Anastasia was fighting her sleep and got rather loud. So I just took her and Asher to the car and so we missed the sermon. Brendon woke with a headache again this morning, so I was really pleased it had cleared by the time he had to preach. 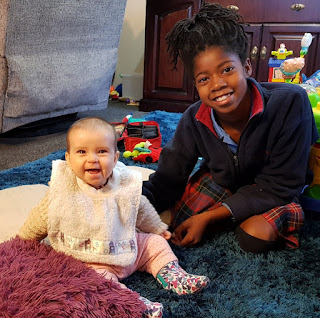 Monday 28th: Ruth giving Anastasia some sitting practice. She has loads of core strength, but is not really aware of needing to balance herself yet. She can sit for a few seconds, or even longer if propped up against something. It's nice to get time sitting totally independently though.
Such happy faces. 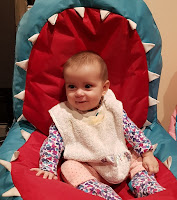 Our bible study has moved to every 2nd Monday now.
Ruth propped Anastasia up in this fun bean bag.
It's been good to see Asher and Anastasia learning to have other people interacting with them. 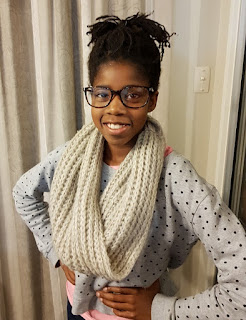 At one point Brendon and I were both sitting at the table having our dinner and Asher was happily playing with Holly. It was so nice to just get that little break.
Unfortunately not long after the study started, Asher had a bit of a hard time neurologically. She didn't have a seizure, but felt really bad. So that was a bit of a distraction to Brendon and I. We kept thinking a seizure was coming, so were pleased that it settled.
Ruth looking very sophisticated with her new glasses. 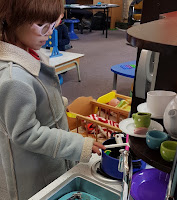 Tuesday 29th: It was lovely to see Asher happy to play with the kitchen when we arrived at school today. It's a big step for her to be enjoying more of the activities in the class. She sticks to what is familiar and comfortable, so it was really encouraging for me to see. 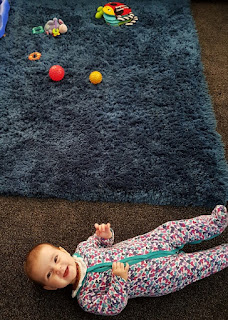 Wednesday 30th: Anastasia has finally decided she won't just do the odd roll, but can actually use that skill to really move. I put her down were all those toys are and she ended up way over to the side. It's so cute to watch. 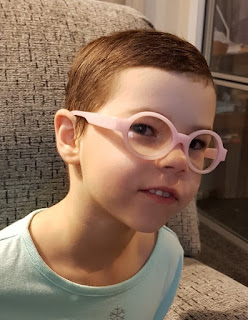 Asher's hair has needed a trim for a while as it's regularly in her eyes again. I got the crazy thought tonight to just shave it off. I took the longest attachment I had for the barber shears but was not wanting to have it as short as what Brendon or Hezekiah have it. And it actually worked out ok. She seemed to like the vibration of the shears and tolerated more work than when I used scissors. It was rather tricky using them on the top and trying to leave the hair relatively long (and neat). Not bad for a first effort. :-)
Posted by Buckland at 10:00 PM