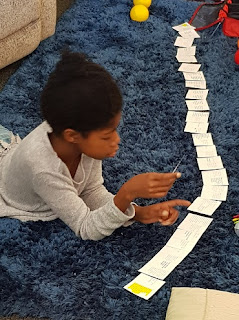 Monday 23rd: Ruth's guide leader sent her an e-mail this morning letting her know how very close she is to getting her Outdoor Gold Challenge. She is then really close to having her Gold Endeavour completed (an excellent achievement). 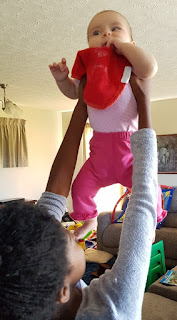 She just has to do one activity each day this week and she will be done. So her leader has offered to email her each day with just one task. It was great motivation for Ruth and not only did she get her task done today, but she sorted her shelf and guiding things too.
RIGHT: Ruth often enjoys "throwing" Anastasia up. Although she doesn't really leave her hands. 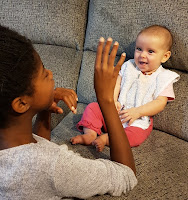 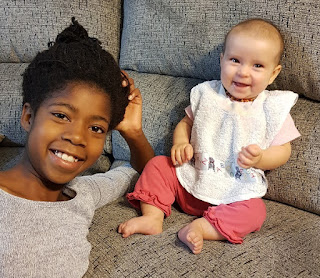 Ruth also likes giving Anastasia sitting practice - working on strengthening her "core". She gets her to look all around and Anastasia's job is to not fall over. :-) 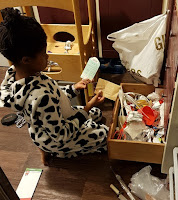 Ruth's sorting mood continued and she offered to sort the messy bottom draw for a small fee. I was happy to pay it as it was such a mess and she did a good job of getting it usable again. 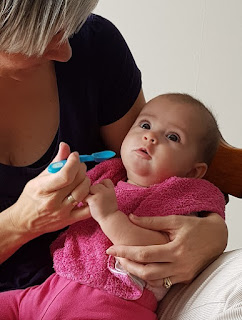 Tuesday 24th: Anastasia doesn't sleep as well at night as any of my others, so although I have wanted to delay starting solids for as long as possible (and just go straight to finger foods like we did with Asher) I am desperate to find something to help me get some more solid sleep. After 4 nights of her waking even early than her normal 3am, I decided it was worth giving it a try. 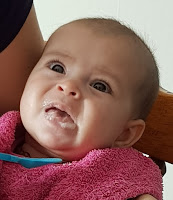 She was not terribly impressed. 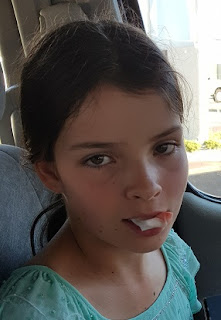 Poor Hannah had a filling fall out (again) and so she was in quite a bit of pain. After calling a number of dentists, we finally got an appointment for this afternoon. So I headed into town with all 5 of them. The decision was made to rather pull the tooth out. It is a baby tooth and the adult tooth is not too far behind it. It's a molar, so may have only fallen out in a years or so, but it was worth getting it out with the pain it was causing. And it really isn't worth putting another filling in. It makes me wish I had just refused to have the filling put in, in the first place. There was a small bit of decay between two molars, but was not causing any pain. 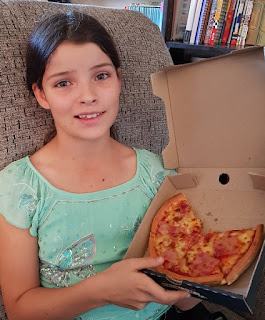 Thankfully the trip went really well and although we were very early, we didn't have long to wait as we could get her in just after we arrived. It was great that Hannah had gone to the library this morning and reported on her last two books. So she had her Pizza voucher and we could pick up a pizza for her while we were in town. She was pleased when the injection started wearing off and she could eat a bit. It took a while for the lip to get back to normal though (so a half paralyzed smile for this photo). She was so kind and shared her pizza with the family (only having two slices herself). She even asked when Rachel would be back as she wondered if she could keep a piece for her. How very kind. 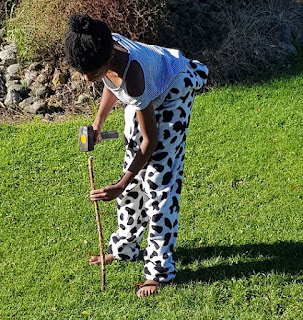 Wednesday 25th: Anzac day today but Brendon worked almost a full day. Ruth got her sundial started for her next Guide activity. 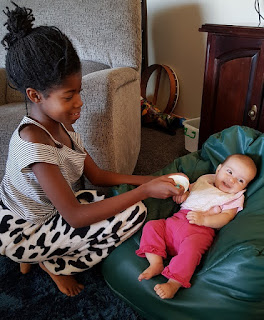 And she enjoyed feeding Anastasia this afternoon too. It went much better than yesterday but she is not really interested in it. The frustrating thing about it all is that I know I have more milk than what Anastasia will drink. She often only drinks from one side and I often feel she could get more. 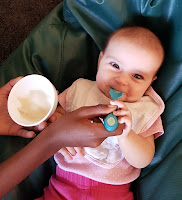 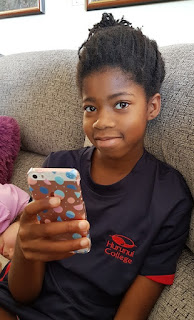 So I've got enough but it's perhaps not quite fatty enough to get her going longer through the night. So I've also started making myself some chocolate shakes (with loaded protein, a bit of fat and extra things like brewers yeast which is supposed to be really good for milk production) in the hopes to try and get my milk quality up. I've been putting a load of effort into my diet over the last week, but it doesn't seem to be enough. 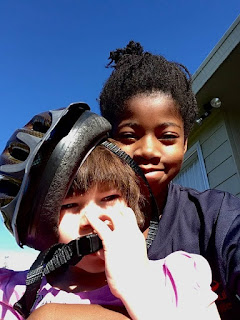 Thursday 26th: Ruth's new phone arrived today. She had been using my old phone but her service provided "upgraded" and now the phone won't work in our area. So she has been looking on-line for an iPhone and is very excited about it's arrival. She will be paying it off over the next 6 months (or sooner if she gets extra jobs done and earns the money more quickly).
RIGHT: Ruth's first selfie on her iPhone. 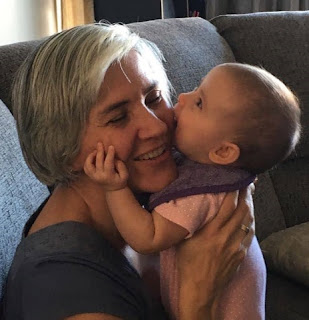 And she took this one of Anastasia giving me big kisses. Just like Hezekiah did at this age. 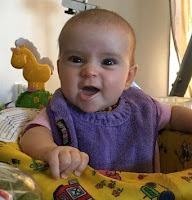 And this one of Anastasia wrinkling up her nose. She does it even more than this - but it's the first time we have gotten it on a photo. 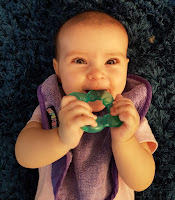 Unfortunately Anastasia has had two really bad nights, waking at 11pm crying, and again not long after midnight. I'm not sure if the porridge upset her stomach, or if it's just teething that is worrying her. So for now I have stopped with the solids and am just focusing on getting my milk quality up. She is enjoying chewing on the teething rings that Nana sent her. :-) 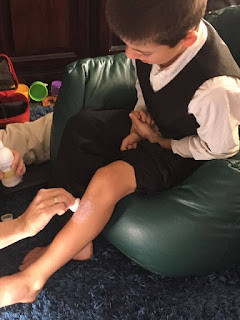 Yesterday Hezekiah and Hannah went to help an elderly neighbour with some gardening as her hands are getting sore from arthritis. We are wondering if Hezekiah got bitten by something while he was there, as this morning he has over 8 bites on his leg. They are quite swollen and very itchy. Poor guy. At least some calamine lotion gives a bit of relief. I called the free health line to double check if there was reason to see the doctor with the bites. The advice was to get him to a doc to just check them out because of the amount and size of them. 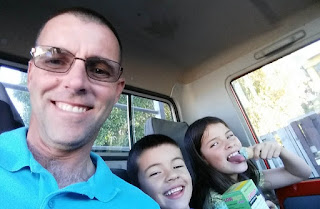 So Brendon got home a bit early so that he could take him. The doctor gave him some antihistamine and a script for antibiotics just in case they got infected (then we don't need to go back for the script). Thankfully the one dose of antihistamine was enough and they looking much better on Friday morning.
I had suggested they pick up eggs and visit the tea rooms after the doctors appointment and Hezekiah decided to invite Hannah to join them. So the three of them enjoyed an ice cream treat. 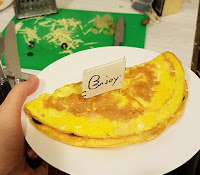 Ruth made omelettes for dinner this evening. She went to great effort to make it a little more fancy. She also had a lot of options on her menu.
Friday 27th: Asher had a seizure at 6pm and then she got off her bed at about 7. Just as Brendon got to the room, she fell with another seizure. At first I thought it may have been because she spat out half her lunch time meds. But after the 2nd one, I was not so convinced. (Note: By Saturday we realized the reason - she was getting sick. She had a really runny nose through the weekend but thankfully no fever and no more seizures). And that's only 5 seizures this month. Which is excellent. 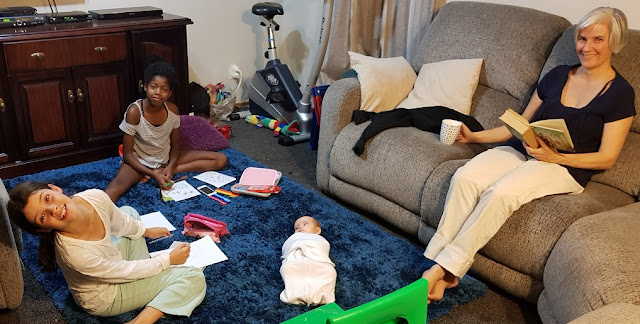 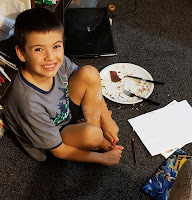 This week I started reading Swiss Family Robinson to the children. I've never read one of the classics to the younger ones. And it's something Rachel and I enjoyed so much of when she was younger. So it was good to get them started. It will take a while for them to learn to understand it all - but they are slowly getting into it.
Ruth suggested they draw pictures about the story. She even has a little book she has started with a picture for each chapter.
Hezekiah wasn't finished his dinner, so he was off to the side (otherwise the messed rice would get lost in the blue rug). 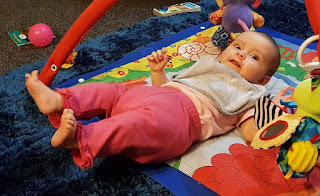 Saturday 28th: Anastasia just loves doing this. I call her "sit ups". She lifts her legs as well as her head. Such a strong little stomach.
Unfortunately she has a really nasty cough. It's gotten worse today. So with that and Asher's very runny nose, I thought it best that we not go to church tomorrow. 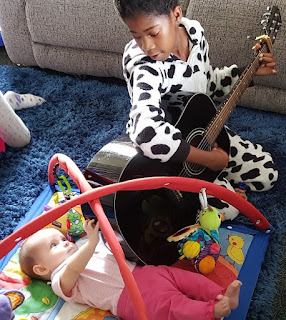 Sunday 29th: Ruth has a cough too, so she stayed at home with me so that she could help with Asher and get a bit more of a rest herself too.
Anastasia really enjoyed her guitar playing and held tightly onto the guitar when she brought it close. She must have really enjoyed the vibrations on her tummy. 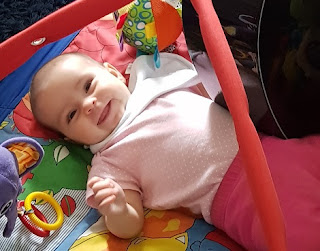 Such a happy little girl, even with a cough and teeth moving around in her gums upsetting her. 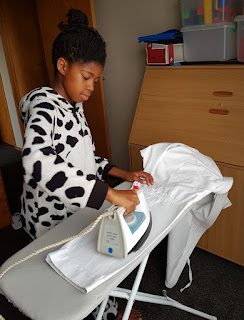 Ruth has been longing to do some ironing (I NEVER iron). So today ended up being a nice quiet day for her to get her wish. She ironed Brendon's karate gi for him.

And so, the holidays come to an end.
Posted by Buckland at 10:00 PM