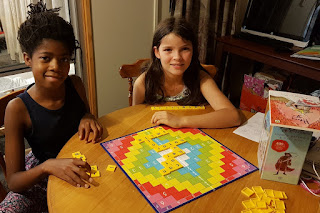 Monday 16th: And so the holidays begin. Ruth had been playing scrabble on her phone and so I told her we had a junior scrabble. It was out in the garage, so it was great to get it dusted off and used this evening.
I only noticed afterwards that I had gotten the box of Shakespeare books in this photo. I ordered them off the last Lucky Book Club order and Hannah is just loving them. I read Twelfth Night to Hannah and Hezekiah this afternoon and they really enjoyed it. They are short enough that I could read the whole one today. 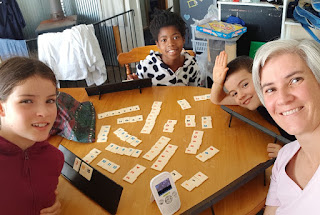 Tuesday 17th: Early this morning Rachel headed off to a course that she is doing in town this week. It's in the hospitality field and will culminate with her helping at the Rugby game held at AMI stadium on Saturday. She only heard about it last Wednesday, as there was a last minute opening. A great opportunity for her to learn and get great experience. This course is not giving her any NCEA level credits, but the experience will be great.
The other game I brought in from the garage yesterday was Rummikub. A nice one for Hezekiah to be able to join in with. 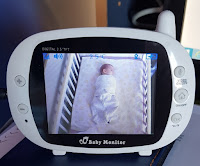 Up until now Anastasia has been having her day naps in the lounge in a Moses Basket that a friend lent us. For a while I have been thinking I need to move her into her cot during the day, so I ordered another video monitor. I didn't want her to have to cry to call me when she wakes up. I generally just see when she wakes up and then pick her up. No crying necessary. So at least I don't have to change that now. And hopefully she will get better naps in the room. She did have a great nap this afternoon for her first nap in it (and Wednesday went really well with 2 really long naps - something she doesn't do much).

Wednesday 18th: It's been fun to watch Asher enjoying the keyboard. She sings different songs while she plays. So cute. 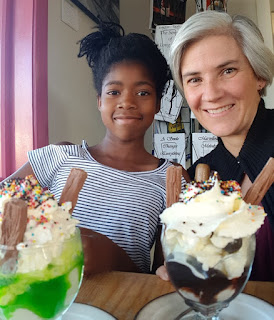 The original plan was that Brendon go with Ruth this afternoon, but as Brendon still has karate during the holidays, I thought it would be a good idea for me to get out the house for a little.
Ruth asked for a lime ice cream Sunday. She takes after her Nana who loves lime too. 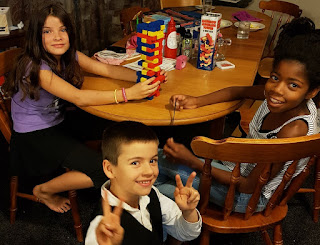 Tumbling Tower the game this evening - before Asher went to bed so that the falling wouldn't disturb her. 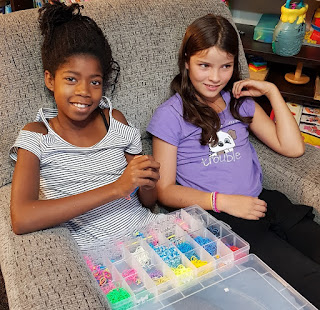 Ruth showed Hannah how to make a loom bracelet this evening. And then we watched a bit of American Idols together. It's always been something we have enjoyed watching together as a family. So we were pleased when we saw that it was on again. 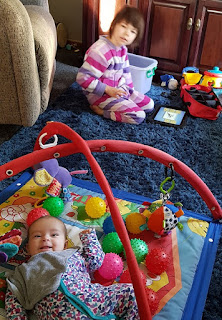 Thursday 19th: I was in and out of the room this morning with only Asher and Anastasia in the lounge. It was so sweet to see Asher roll all the soft balls to Anastasia (there was no one else sitting in the room to send them to). Anastasia enjoyed trying to grab and eat them.

An update on the Shakespeare books - Hannah has already read 8 of the 16 books. She is really enjoying them. What a great introduction to such famous stories. 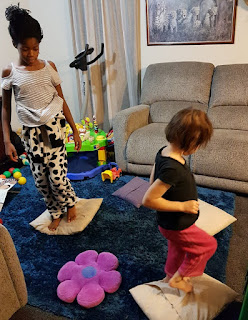 Hezekiah joining Asher in watching a DVD this afternoon. I love how affectionate she was with him.
And this evening Ruth created a game for Asher with the pillows in the lounge. I'm always amazed at how much Asher is willing to do for Ruth. 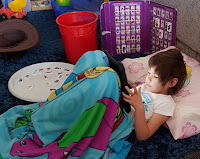 Friday 20th: Asher often goes to her bed to play with the iPad and her dominoes. With Anastasia sleeping in there now, she has been moved to the lounge. Thankfully she is mostly happy with the change of room. 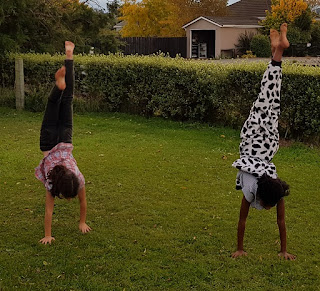 Ruth and Hannah having some fun outside.
Rachel arrived home this evening from her course at about 8pm. She had dinner with friends from the course before heading home. So we only got a very quick update from her. She left again on Saturday morning for her normal Saturday work and then headed back into town for the last day of the course - working at the AMI stadium during the rugby match. As she was only finishing at 9:30, she stayed with the friends she stayed with during the week as she would not be able to make it home by 10. On Sunday morning she then heads straight to the CEF camp which started for the leaders at 9:30.

So we have hardly seen Rachel through the holidays. She is having a great time though and has learnt a lot this week.
Saturday 21st: This morning by 8:30 Brendon had left with these three to go and watch Sherlock Gnomes. I had won a family pass to the movie from The Hits radio station (on a facebook competition). 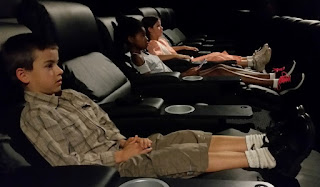 Getting free tickets makes us just make a plan to get something done. What a treat for them. And it's been ages since we have been to the movies so they were amazed at these fancy seats. How things have changed.
They stopped at Burger King for lunch on their way home. So a very special day for them. Great to have some nice memories from these holidays.

Sunday 22nd: Brendon preached this morning. The sermon went well although it was a challenge for me with Anastasia and Asher - so I missed a bit when I had to take Asher out as she was shouting. We had a nice relaxed day together though and ended it with a game of Rummikub (I forgot to take a photo as I had Anastasia sleeping in my arms).
Posted by Buckland at 10:00 PM