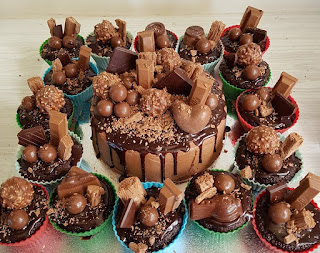 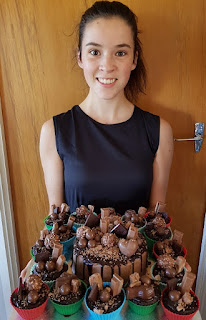 Friday 6th: Rachel will be making her birthday cake to take to friends next weekend, so she decided to just make cupcakes to have with the family today. There was a bit of extra batter so she made a small cake too. It was good to give her a bit of practice with the drizzle effect with the ganache. 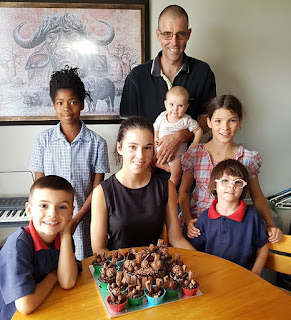 It worked out beautifully. It was only after I took this photo that I went and counted how many cupcakes we had put on the tray.
16 cupcakes + the cake = 17. How perfect was that!
Happy 17th Birthday Rachel.
We were all eagerly awaiting Dad's arrival home from work today - so that we could enjoy this lovely chocolate feast to celebrate. 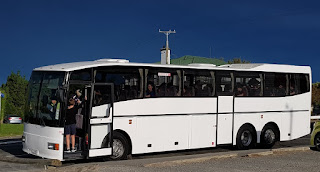 Just yesterday Rachel was told about an event that the HYP was having this evening and Rachel decided to go. They had a couple of busses collected youth from around the district and they had a meeting (hui), dinner and then some fun (including mechanical bull riding and a gladiator ring). What a great extra to her birthday plans. A fun free evening out. 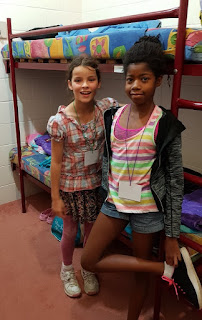 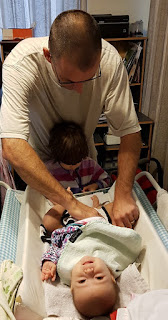 And after I had dropped Rachel off for the bus, I then took Ruth and Hannah to Waipara for a Sibling Camp run by Parent to Parent. It was nice that it was so close to us. They have both been looking forward to it. I'm sure they will have loads of fun with all the great activities at the camp site, as well as good time to chat with other siblings of special needs children.
Asher seemed interested in helping Brendon with Anastasia's nappy this evening.
The house feels so empty with just 3 children here this evening. :-) 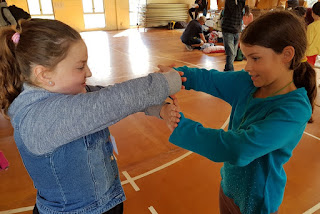 Sunday 8th: I collected the girls from camp this afternoon. They had a great camp. Hannah's favourite new friend is another Hannah. They were in the same group and got along so very well. They look forward to keeping in touch via e-mail and phone calls and hope to see each other again at a sibling day later in the year.
We had fun listening to stories of some of the fun activities they did through the weekend.
Monday 9th: Final assembly of the term for the whole school this morning at the start of the day. Hannah got a certificate for participating in the triathlon the school had this term. The group going to CASAFEST also did their dance for the school. Ruth was thrilled to be able to join this year - the first time Year 8 children have been able to attend. They leave early on Wednesday morning and get back Friday afternoon. 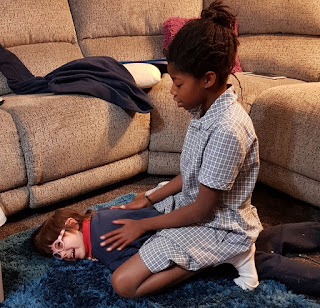 There was only space for 3 Year 8 girls (as they were short for their junior team) and there were 6 girls interested. They drew names from a hat, and so it was really special for Ruth that she got to go. She is hoping to go every year and then she will be the first to attend for 6 years.

Ruth gave Asher a massage this evening. It was quite amazing to see Asher happy to lie and get rubbed. She doesn't normally like that kind of touch. She does in general tolerate so much from Ruth though. Ruth plays with her so much that I think she just saw this as a new game. 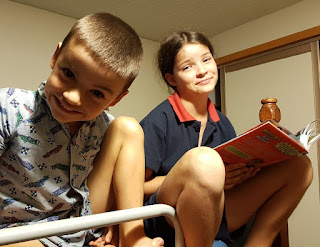 It's been lovely to see Hannah enjoying reading so much. I found her in Hezekiah's room this evening, reading to him. 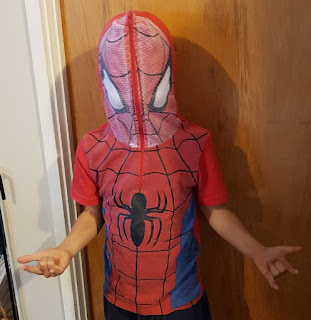 Tuesday 10th: A friend gave me a bag full of things for Anastasia and included was this top for Hezekiah. He was thrilled with it. 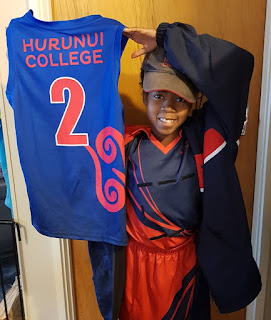 Ruth was really excited about getting her netball uniform today. She also got this vest and jacket to use for CASAFEST. All these firsts are very exciting for her. 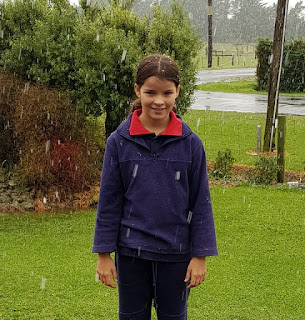 Wednesday 11th: What a freezing day for them to head off to CASAFEST. It was snowing when they left before 7am. Snowing nicely again after 8 and so Hannah wanted a photo in the snow. So odd to be having snow so early in the year. 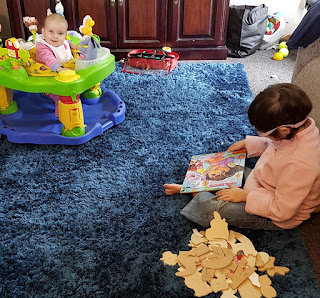 Asher's teacher wanted her to have a day off each week for her first term. So she had a "new entrant day off" today. Anastasia watching her build puzzles this morning. 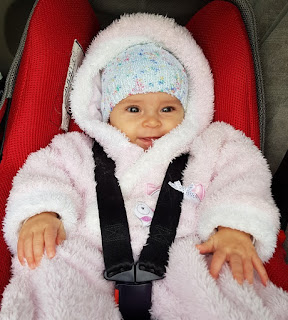 Thursday 12th: Anastasia had to get bundled up this morning as Rachel is at work so she has to come with for the school drop off.

I took the photo below on the way home after dropping them at school. So beautiful to see the mountains full of snow.

Asher has had 2 weeks without a seizure which has been a real blessing. She had a seizure this evening at 8:45pm. Thankfully she slept well the rest of the night. She had another seizure on Friday at 7:20pm, just as we were about to pray before she went to bed. She hadn't been looking great and came over to me with such stress on her face. It started while I was holding her. Poor girl. I'm so glad she has had such a nice break though. 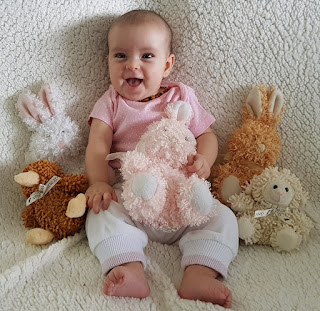 Saturday 14th: Anastasia is 5 months old today. She is such a happy girl and smiles and laughs so much. Her 2nd name is very appropriately Joy! She is bringing much joy to our home. 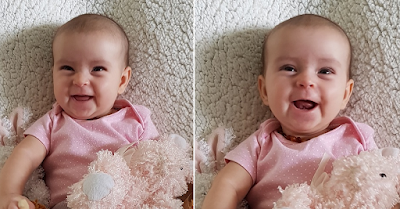 Hezekiah was behind me and she was laughing at him. 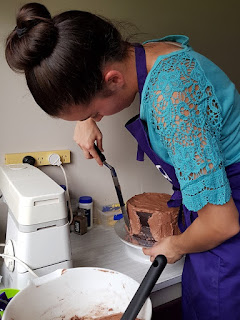 Rachel baked her birthday cakes yesterday. The recipe is a very runny texture and I was really nervous about how runny it was, so I suggested she not put all the water in. That was possibly a big mistake though as the cakes all had a bit of a dip in the middle. So we had to brainstorm on what we could do. Eventually the decision was made to cut one of the size flat  (for the base) and then the top one would be put upside down with chocolate mousse in the gap. She also made some ganache to join the pieces together (rather than butter icing) and then used the ganache to do a crumb coat (you put a thin coat on the cakes which makes it much easier to ice the next day). They went into the fridge and we were both relieved when they were nice and stable today (no mousse leaking out) and ready to ice. 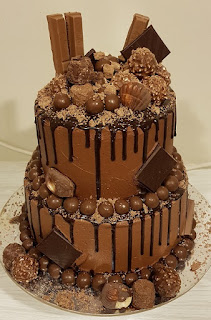 After Rachel's cake decorating course she bought a spinning table and a palette knife which makes this job much easier. She is getting really good at icing cakes now.

Ruth has bought a cell phone and needs to earn some extra money to pay it off (we agreed to lend her the money as it was a really good price). She was doing some vacuuming this evening and got Asher helping her. It's actually more work allowing Asher to help, but Asher was so pleased with herself being able to do it on her own. :-) 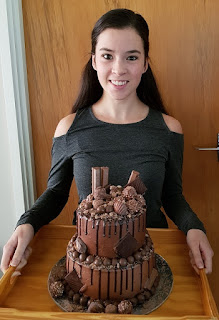 The cake turned out beautifully. She did the ganache drizzle effect really well. She gets nervous with placing things, but I think it's great.

Sunday 15th: Rachel's proper birthday celebration was today with friends. They went ice skating and enjoyed the cake this afternoon. So special that she could make some lovely memories this year with a great group of girls.
Posted by Buckland at 10:00 PM