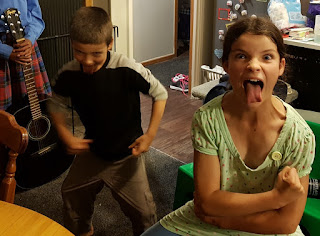 Monday 30th April: Kids back to school today. And this evening we had a visit from Eben, a friend from 20 years ago, and his new wife Minette (they got married on Saturday).
After dinner the children sang some songs for them, including showing the faces pulled at the end of a haka. Girls don't do this part - but if they did, Hannah would be very good at it. Hezekiah was pretty good too, he just needs to lift his chin up a bit so we can see him better. :-) 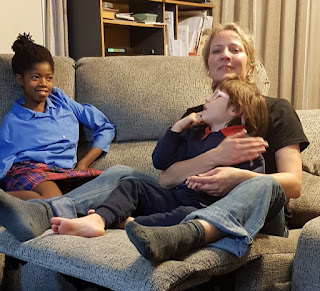 Asher enjoyed some cuddles from Minette, who had shown a bit of extra attention to Asher and so she had responded with much affection back. 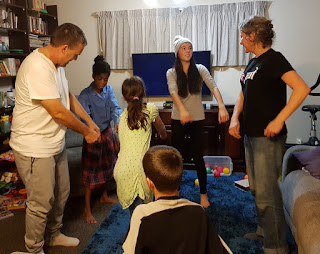 We had a lovely evening with so many laughs and some tears too (especially when they read Rachel's Gallipoli poems). The funniest part was when the girls taught them how to do "flossing". A "new" style of dancing that is now getting popular. Hannah is so funny with it and puts on such a show. She does the actual dance well, but then does a silly version too which is just hilarious.
It was great to catch up with Eben after so many years and also special for us to get to meet Minette. 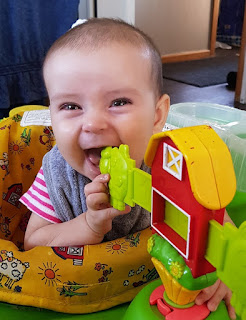 Tuesday 1st May: Anastasia just loves this toy on her ExcerSaucer. Such a happy girl, despite those teeth worrying her. A nice toy to chew on. She also moves around so well now and can get to whatever toy she is interested in. 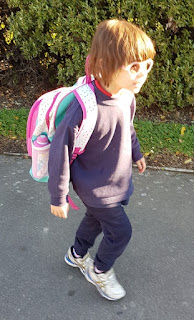 I wasn't sure how happy Asher would be in the holidays with not being able to go in the car every day (she just loves the car). Thankfully she adjusted fine and then adjusted back into the school routine easily again this week. 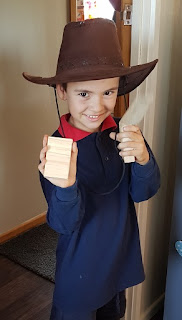 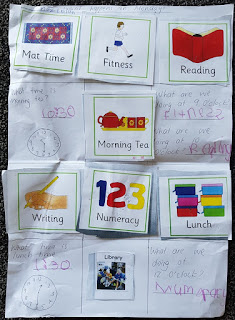 They are working on telling the time in his class. So he had this to bring home today. I always take a photo straight away as then we can keep a record of it all. 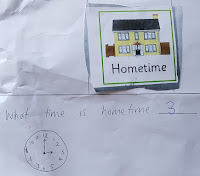 He made sure I took a photo of the back too. Home time is obviously very important. :-) 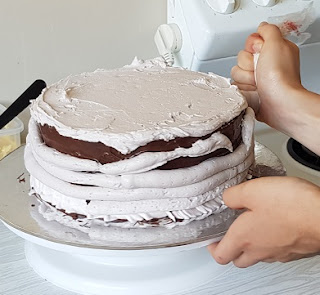 Wednesday 2nd: As Rachel is decorating cakes this year to build up her portfolio, I suggested she make us an anniversary cake. She had a bit of an issue with her ganache crumb coat (the ganache was just too runny - the first time that has happened to her). She also didn't flatten the cakes, as we had hoped the ganache would fill the gap. Soft ganache was just not going to do the trick. So in future she will always cut the tops of her cake so that they are flat.
She could not just easily apply her butter icing today. So she had to try this method. It worked ok, but the ganache was just too soft and was slipping off the cake (from that middle "gap" because of the cakes not being cut flat). So she did a good job in getting it presentable. It was a good opportunity to learn some lessons. 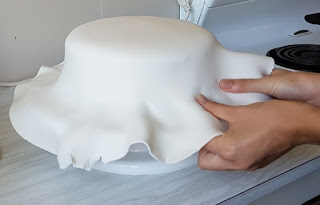 It was the first time she has put fondant onto a cake by herself. She generally got me to help with this part with previous cakes. So she did a great job. Not only that, she did a better job than I have ever done. She worked slowly, stretching the fondant so that she didn't have any "folds" on the sides. I have always had folds, so she did an excellent job. 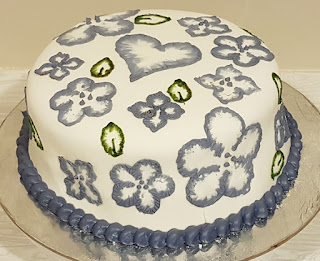 I had wanted this embroidery flower look. It was a good thing she did this one as an experiment, as it's not as easy as it looks. The challenges helped her figure out better ways of doing it. And I do agree with her, the white on dark fondant will look much nicer. I just didn't want too much colouring on the cake. So I asked for purple on white. I'm sure white on dark purple would have been much nicer. So orders will look quite different. I just loved the piped icing border on the tray though. No improvement needed there - it looks better than anything I have every tried.
Great job Rachel. 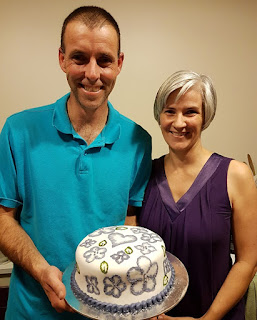 She got the cake finished up this evening so that we could enjoy it together as a family. Our anniversary is only tomorrow. Brendon and I are going out for dinner tomorrow, so at least we can enjoy some cake for morning tea (and the kids get to take cake to school for morning tea too). 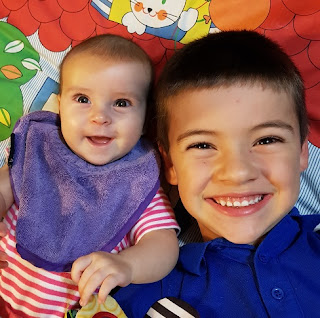 Hezekiah was playing with Anastasia and I quickly got this photo. How incredible to see the size difference of those heads. Such a special photo of my two smilers. 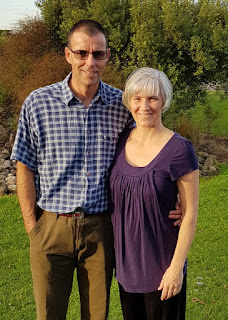 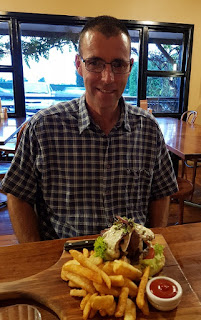 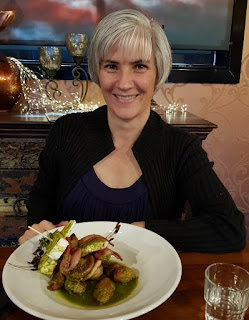 Thursday 3rd: Unfortunately Brendon woke with a terrible migraine this morning, so he spent the whole day in bed. He was feeling better through the afternoon though, and so we were still able to go out for dinner. Normally his migraine medication works well and within a couple of hours he feels better. This time it didn't work though, and he just needed the extra 8 hours of sleep.
Brendon had an open venison sandwich with such amazing fries.
I had a chicken dish with cheese and bacon. It was very tasty.
So thankful for the 21 years we have been married, and for such a special evening to celebrate.

I'm glad we had an early dinner and were home when Asher went to bed, as she had a seizure just as Brendon was putting her into bed. The teachers had described her having a conscious Tonic Clonic seizure, and Brendon saw this too this evening. It was only 30 seconds but she was restless for an hour before she was finally asleep. 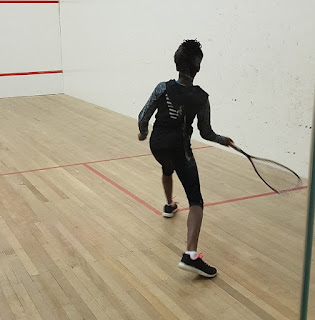 Friday 4th: Ruth saw an advert in the school newsletter about squash on Friday evenings. Open to all. So we headed up this evening. I played a bit with Ruth (as we were there first) and then I had a game with the one lady that attends. I was so pleased that there is at least one other female. I always feel bad for the guys when they have to play me, as I can't hit it anywhere as hard as they do. After our 3 games she then played with Ruth a bit. I could see her improving within the few minutes of playing. So I'm sure she would be able to take to it quickly. 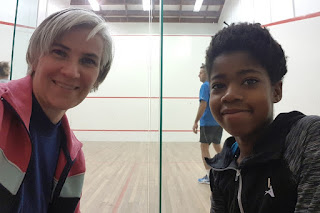 Thanks for the suggestion Ruth.
Posted by Buckland at 10:00 PM