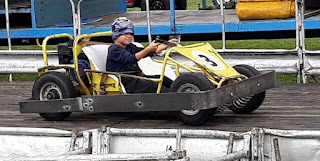 Ruth had been up helping with her class's fundraiser from 6:45am till 8. She came home to get some last entries which we had to drop off before 9.
Rachel's friend Bonnie came to spend the day with Rachel and so they all headed up before 10am. The older girls said they would watch Hezekiah and help him with getting on the rides that he wanted to go on. 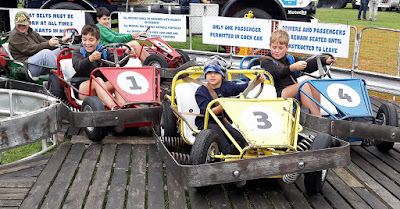 They all save up their pocket money through the year with the A&P Show getting a big part of their savings.
Hannah and her two friends also headed up at 10 and spent the morning together. Ruth also found her friends to spend the morning with. 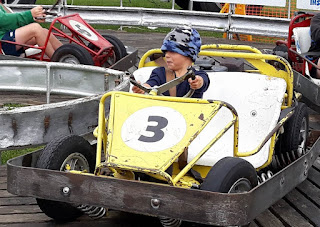 Hezekiah's legs were just long enough for him to drive the bumper cars. He kept being lapped but had such a great time. 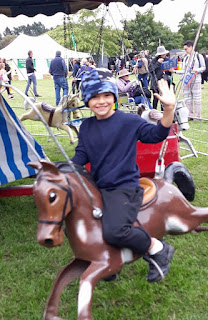 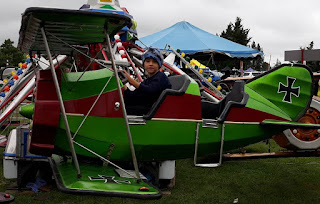 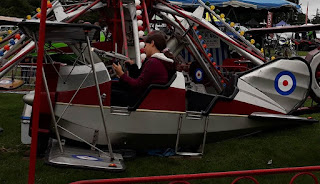 Brendon was working through the morning, so I was home with Anastasia and Asher. At lunch time we collected all the children and enjoyed fish and chips together at home before Ruth and Hannah headed back up.
Hannah enjoyed a lot of rides with her friends in the morning.
Ruth had the most money saved, but didn't spend all the money she took (which we were impressed with). 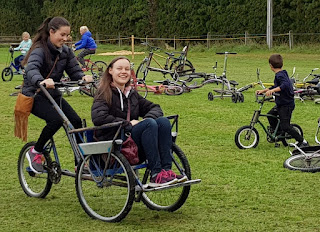 At around 2pm Brendon and I headed up with the youngest 3 and Rachel and Bonnie also headed back at the same time. They quickly spotted these free fun bikes to try out and let us know about them.
This was a huge highlight and was so much fun. 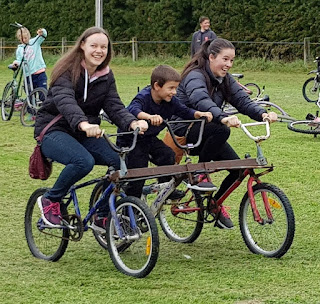 Hezekiah was the one steering on this one. 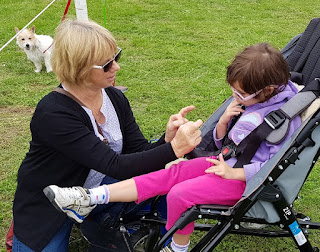 One of Asher's teacher aide's was here and so spent a bit of time chatting and singing with Asher which was really special. 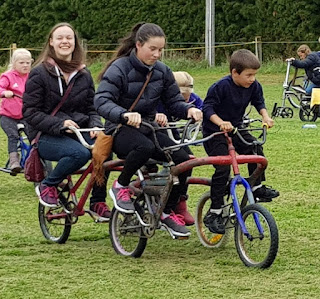 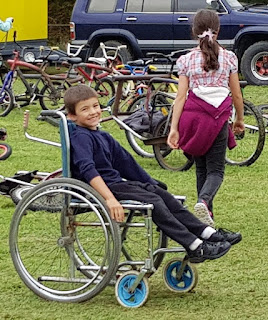 Even having the opportunity to see if they can maneuver a wheelchair.
Around this time Hannah's friend's mum called me to let me know they were leaving. So we could ask her to send Hannah over to the bikes to have some fun with us too. 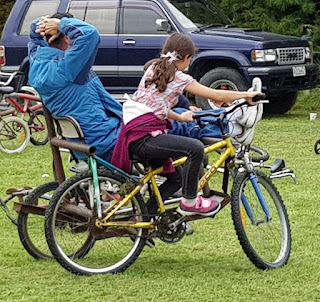 Taking Dad for a ride. 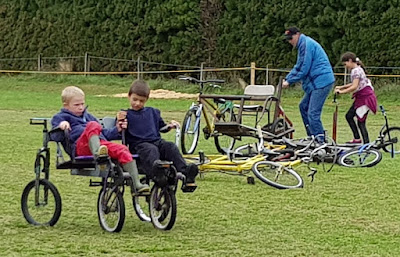 Dad and Hannah on a tandem scooter.
Hezekiah on this funny one which was steered with the pole in the middle. 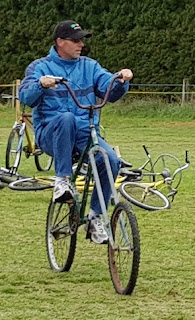 Look at that funny one. 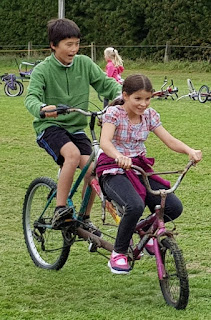 It was nice that the children just teamed up to enjoy the bikes together. Even if they didn't know each other that well. 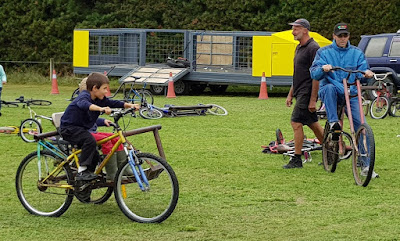 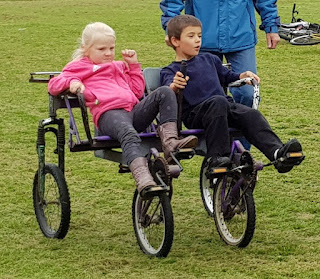 Hezekiah having another go on this one with Pippa. He took charge of the steering and although it was very tricky, he was getting the hang of it. 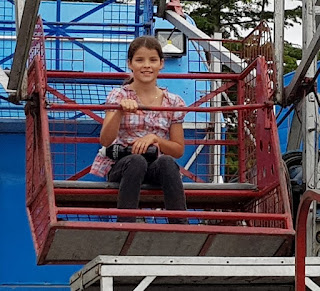 We enjoyed watching the Grand Parade and then headed over to the Ferris Wheel.
Hannah had enough money to have another ride. 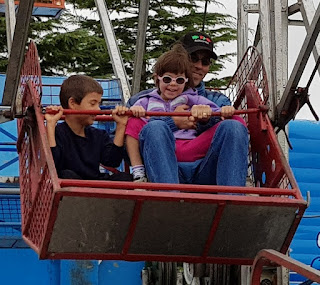 And Brendon consented to taking Asher on. Neither of us enjoy the Ferris Wheel, so this was a sacrifice on his behalf. We had no idea how Asher would do, so even Rachel didn't feel comfortable taking her on. If she had a seizure while up there it would have been rather scary (not much in front of her to keep her on). So Brendon had a tight arm around her and the other hand holding tightly onto the bar.
With Asher having a KiwiAble card (showing that she needs a support person with her) Brendon didn't have to pay for his ticket. So I treated Hezekiah and paid for him to have another go.
And Asher absolutely LOVED it. 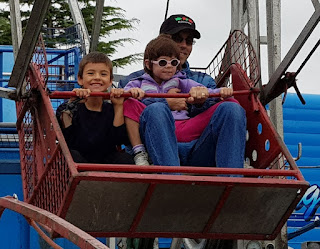 We thought she might as she loves going in lifts. She likes the feeling of "loosing your stomach" as the lift stops, so this suited her. She especially loved the top and going over the front (the part that Brendon and I dislike the most).
So I was really pleased we made the effort to go up together and get Asher on the ride. I'm sure she will remember next year and make a bee line for it. 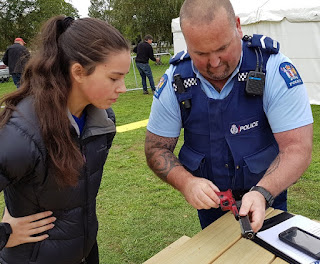 I had fed Anastasia and left her at home with Brendon and then headed back to watch Rachel and Bonnie in the Young Person's Challenge. They do a whole range of activities and it is always so much fun.
Here the local policeman was showing her how to dismantle and put together a gun. 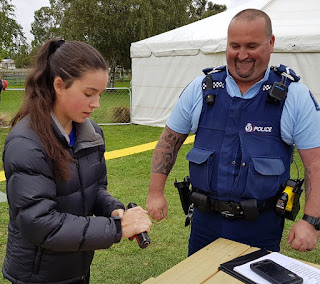 Rachel having her go. They all get timed and pointes are awarded for speed. 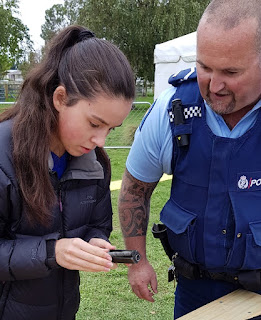 Ken was really helpful in giving her tips and telling her when it was in right and to move on to the next thing.
Last year they had a rifle to do, so it was nice to get to do something different again. 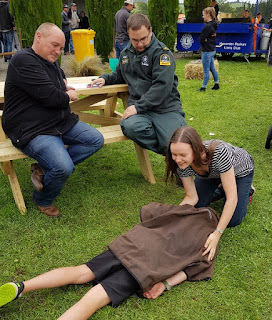 They had a first aid challenge again this year. This time it was mainly to see if you knew how to get someone into recovery position. Bonnie was a bit nervous about this one as she hasn't done first aid stuff before. She did really well though as did Rachel. 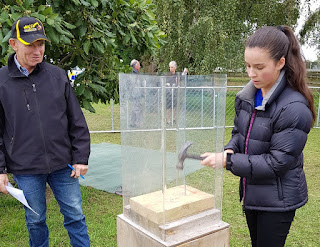 They had to hammer a nail into a block of wood. Counting how many times they had to hit it to get it in. 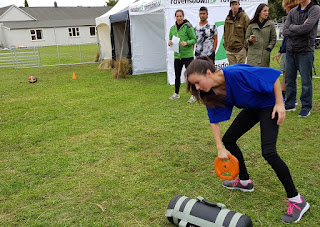 They had a fitness challenge which totally exhausted both Rachel and Bonnie. Well done girls for giving it your all. 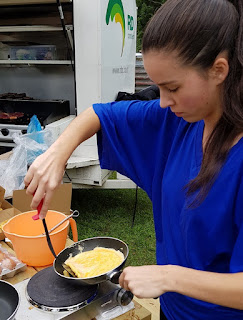 A really fun one was making an omelette. Rachel's was perfect in my eyes. Well done Rachel.

They also had to take a creative selfie (that was hard for me to take a photo of). Rachel's creative idea was to take a selfie on her own phone and then hold the phone next to her in the same spot and take another selfie with their phone. A selfie of a selfie. I thought it was very clever. 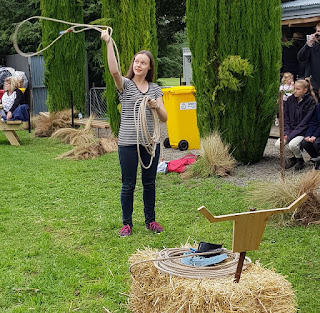 And learning to lasso too. What fun. 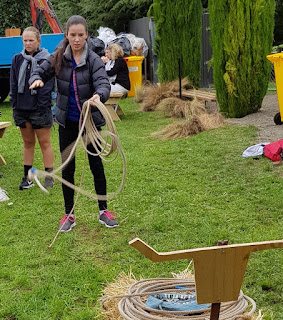 Such a pity I didn't get a photo of Rachel with it up swinging. The girls did so well and had so much fun.
Thanks Bonnie for coming to join us for the day. It was a fun filled day.

All the art and awards left for their own blog posts. :-)
Posted by Buckland at 10:00 PM