Gifts, a licence and a Grand award 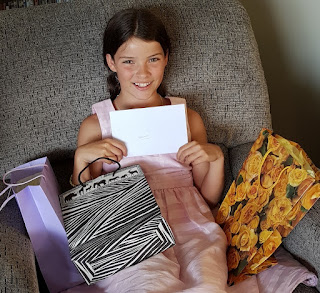 Sunday 18th: Hannah's actual birthday today. She had mentioned her upcoming birthday for a couple of weeks at church, so the Pastor decided to have a celebratory lunch after church today. I should have taken a photo of the food. Loads of fish and chips, sausage rolls and sandwiches. Such a feast. And so nice for all the mothers to not have to worry about preparing lunch today.
Pastor Steve has said he will plan to do the same thing when it's Ruth's birthday. The only problem is that Hezekiah overheard that - so he wants it for his birthday too. Oh dear - he has started something now. :-) 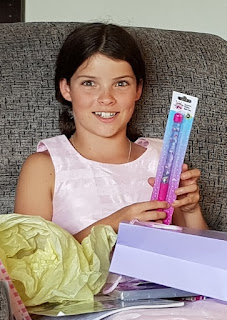 Time for presents when we got home. This is always a big thing for Ruth - so she helped me choose some presents when we were in town for her orthodontist check-up and she got them all in gift bags. Ruth bought Hannah this oversized glitter filled pen - which Hannah was thrilled with. 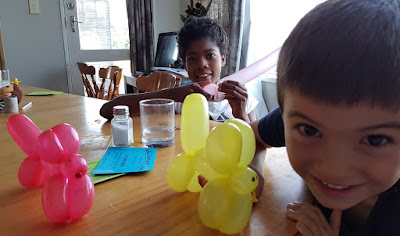 Ruth also likes balloons for birthdays. She brought some to church which she blew up after the service. And then she spent the afternoon creating balloon animals. I'll have to try buy her some proper long balloons for creating things. These aren't the proper ones, so she did a really good job. 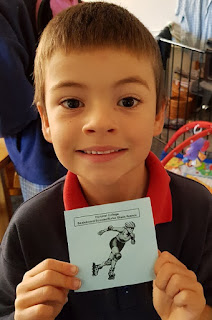 Monday 19th: Hezekiah has a scooter licence so that he can ride his scooter at school during breaks. If the children want to ride skateboards, scooters or roller blades during breaks, they take a form home which they and their parents have to sign and then they have a little "test" to make sure they know all the rules. Hezekiah did his test today and got his licence. He is so pleased. And I think doing all that extra  exercise during school will help greatly too. 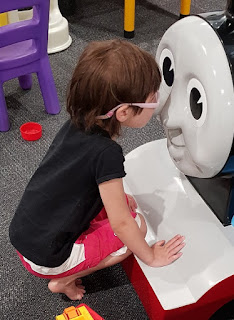 Tuesday 20th: Asher had an appointment with her neurologist today. Brendon took the day off so that he could help me (it's tricky with Asher and Anastasia). He was due to get his eyes checked, so we doubled up on appointments. I'm glad we did that too as he does need new glasses.
We had a good catch up with her neurologist and he has suggested we double the dose of her new medication. So I will probably wait till the long Easter weekend so that if she has some tired days she can rest more over the weekend.
She does so love this Thomas model in the waiting room. I have also realized that if she hasn't said hi to the train, she won't cope with going anywhere else. 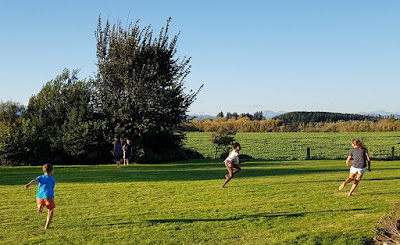 We arrived early but it wasn't long before she got weighed and then her doctor was around early, so he saw us early which was great.
It was bible study again this week (it's only every 2nd week). The kids so enjoyed the time outside after their dinner. They must make the most of it as it's going to be getting dark and cold soon. 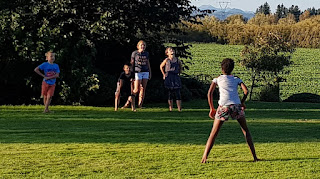 They had a great time with a few different games.
And then we had a really good study. Unfortunately Asher is not falling asleep as she did the first time we came (and put her in a make shift bed at 7:30). Hopefully she will cope with the later bed time. 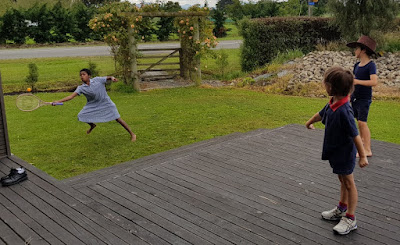 Wednesday 21st: Asher had a seizure at 7:40 this morning, so she was a bit late for school.
Ruth has been playing a bit of tennis at school. She found my racket from when I was in primary school. Wow - that racket has done well. It's over 30 years old.
The game this afternoon was Asher throwing a table tennis ball for her to try hit. I love how Ruth comes up with games. Especially how she gets Asher involved.

Friday 23rd: Asher's class showed their art pieces at assembly today. Asher had no idea what was going on and just did her own thing. It was a bit hard on Hannah and I. I saw Hannah embarrassed about Asher for the first time when the boys laughed at her. Asher has so much support though that I know it's going to get better. 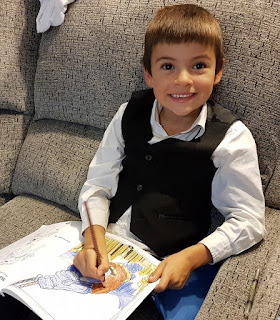 Ruth and Hannah are actually going on a SibCamp the weekend after Easter. It's a camp run by Parent to Parent only for children who have a sibling with special needs. There was a pre-camp questionnaire that we had been given, asking the girls what things they wanted to talk about. So Hannah got to ask about the issues at school with people laughing. I'm glad she will get the support and encouragement that she is not alone. All the leaders on the camp are also siblings of special needs - so they will be able to fully relate. It's not all about talking though, it's also to just have loads of fun. Both Ruth and Hannah are really looking forward to it.
RIGHT: This was definitely photo worthy - Hezekiah choosing to colour in. And he spent ages on it too. I was really impressed. Nothing like a super hero book to encourage a boy to colour in. :-) 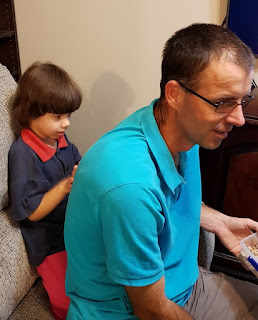 Asher giving Dad a "rub". Ruth often gives Brendon a massage and Asher has been copying her lately. She says "rub rub". So cute. 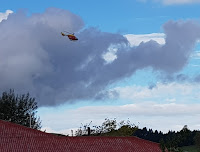 Saturday 24th: We had a bit of excitement this afternoon when the Westpac Helicopter suddenly arrived and landed just 300 meters away from us. The road was closed off for a while and then we saw it leaving - very slowly. So we guessed whoever needed them was on their way to hospital and we pray they are safe. What a blessing to have the Helicopter available to get people to hospital so quickly. 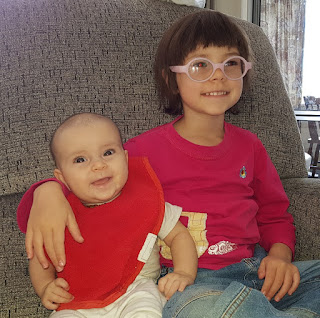 Asher had a seizure this evening at 8:15. So far she has only had 2 each week this month, so it's been going really well.
Sunday 25th: Ruth setting up a photo opportunity again. A cute one of these two. 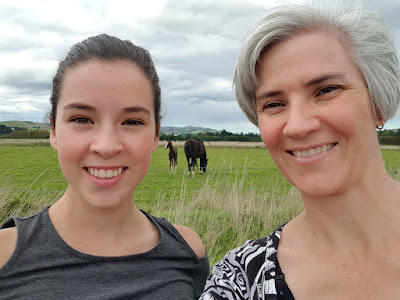 A bit late with our egg collection this week, but a nice opportunity for Rachel and I to get out and have some time chatting. 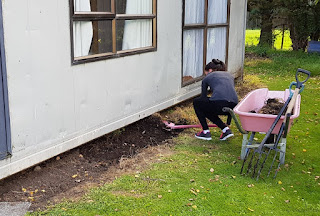 Rachel then got a bit more work done on her new flower bed. She has ordered some bulbs that she plans to plant along here. It will look really pretty.

This is the first bed she cleared. She has planted sweet peas along the fence and some other flowers in front of them. 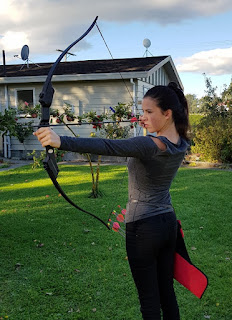 She had a very productive day and even got some archery practice in. She hasn't used her bow in such a long time. She has now ordered a nice target so that she can practice more often. 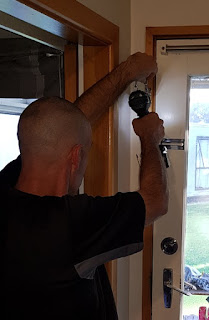 Brendon putting an extra high lock on the back door as Asher can now unlock the dead-bolt. We have to be able to lock doors otherwise she will sneak out and head off so quickly. She can open the garage door too, so could be out on the road in no time. It often feels so strange to have to do this, so it's helpful when you chat to other families who do understand and have to do the same thing. Her safety is the top priority. 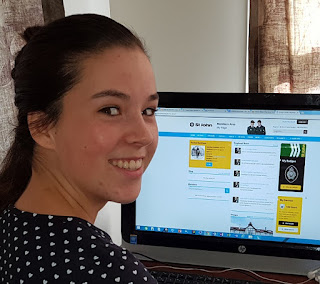 Monday 26th: Rachel was so pleased today when she saw that her Grand Prior has been awarded. It's the 2nd highest award in St John Youth and she had the goal to get all the work done while she was still 16. Most cadets who get this award are 18 when they finally complete the work. So it was really special for her to get it so quickly. They present the award at a very special ceremony (only once or twice a year) so she knows she will have to wait a while to actually have the award in hand. But this was the confirmation that she has done the work and officially earned it (before her 17th birthday).
BELOW: Anastasia playing with Dad this evening. 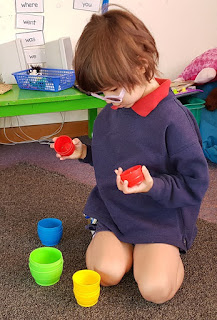 Asher had a seizure on Monday just at the start of lunch. A couple of the boys from Hezekiah's class were there when it happened (she was in the area between their class rooms). So on Tuesday morning after I had dropped Asher off (and took this photo of her showing me a new game) I went to chat to his class and answer any questions they had on seizures. The most important thing I wanted them to understand was that they can't "catch" epilepsy from her. There have been so many children sick with tummy bugs lately and so much talk about not passing on sickness, so it was good to clarify things for them.

After a rather challenging morning on Monday, Asher had a really good morning at school today. Unfortunately she again had a seizure around lunch time (this time at 1pm). It was really short though (just 20 seconds) and again she stayed conscious (similar to the one on the 12th March). So although she was disoriented for 10 minutes afterwards, she didn't need a sleep as she did on Monday.
Posted by Buckland at 10:00 PM