Shop, sunburn, building and a bike 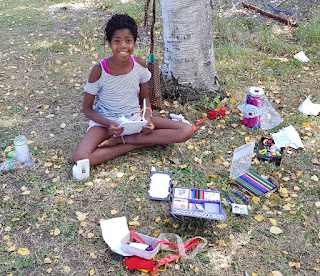 Wednesday 3rd: Ruth created such a big game outside today. She was making "Lucky Dip" bags for the others to buy. Thankfully the money was just acorns. I heard them telling Hezekiah that he must collect more at the start of the day, and that must be his money for the day. It's not fair that he keeps going to collect more through the day. :-)
In their game money really does grow on trees. :-) 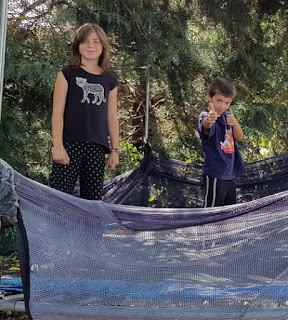 It's been great having Brooke coming over to join in the fun. I always appreciate her willingness to play with Hezekiah as well, and she is even aware of Asher's need to be watched more carefully. 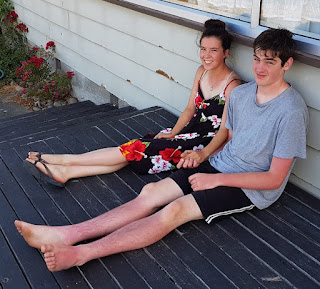 These two didn't put suntan lotion on, and had a lot of exposed skin over the hottest hours of the day yesterday. So they were rather sore overnight and are still sore today. I had suggested a bath with Epson salts last night but I think they wanted to spend as much time with each other as possible. When Daniel left this evening he quickly put some Calomine lotion on to at least make it more bearable to drive home. I wish I had thought of the Calomine lotion last night.
Hopefully they have learnt the lesson (a very hard way) and won't expose their skin so badly again. 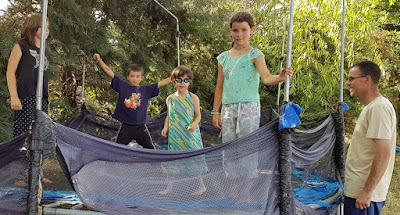 Asher had been watching the children on the tramp from the window and really wanted to join them. So we decided to give her goggles a try. Her neurologist believes the light has more to do with the seizures on the tramp than the actual bouncing. And for now it seems to have worked. She had a great time with them with NO seizure!!! Yay!

Thursday 4th: Rachel was back at work this morning but then Daniel and most of his family came back for a visit this afternoon. I spent so much time chatting that I missed taking photos. Tim had so much fun playing with the younger children. And then he was such a blessing to us and used Brendon's week-eater to clear the two ditches around the property. 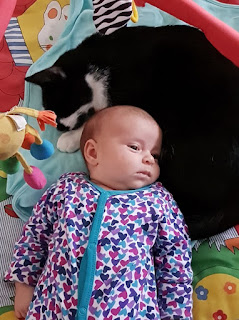 Above: Philip heard me mention that I would like to ask the tall guys to help get the safety net and canopy poles down. He got busy with it straight away and within no time the canopy poles were down. He and Ruth then got the tools out to take the bottom poles off properly. I feel so much better about it now. It was rather unsafe with poles breaking and being loose.
The main reason for the visit however was for the 4 parents and Daniel and Rachel to sit and have a good chat about their relationship. It's the first child of theirs in a serious relationship, so we are all in a new area of parenting. We had a lovely time of sharing and getting to know each other more. It's nice knowing we are all on the same page and have the same ideas for the years ahead.
Saturday 6th: Ruth took this photo of Anakin with Anastasia. Anakin was lying on her mat, so she put Anastasia there for the photo. 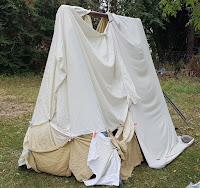 Ruth and Brooke used this old frame to create a tent (with old sheets that I had thrown out). 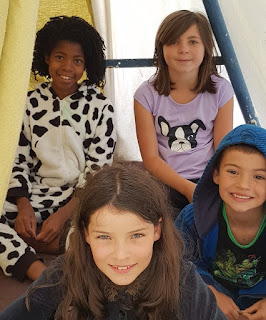 They did allow Hannah and Hezekiah to come and visit. 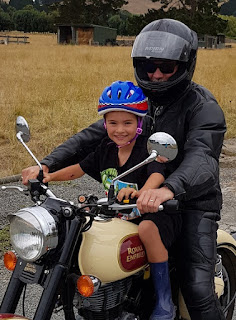 Sunday 7th: Our Pastor came around for a visit this afternoon. When he was leaving I asked if he would be willing to give the children a ride on his bike.

I have such fond memories of having rides on my Dad's bike - so I was sure they would enjoy the experience. Just a short ride down the road was enough for the fun memory to be made.

Ruth wanted to try and hold Anastasia on her potty. She is not as dry during the day as she was in her first month. She is often dry through the night though. Even holding for 4 to 6 hours and then using the potty when she wakes for a feed. I remember Ruth being dry at night when she was a baby. I also remember that she would eventually just wake for a wee (not needing to eat) and so I eventually "trained" her to ignore the need and just use her nappy as I didn't want the hassle of waking to take her to the toilet. I'm hoping I will have enough energy to keep Anastasia dry at night.
Ruth also enjoys getting Anastasia to "walk". It really is sweet seeing the reflex that babies have to lift their feed and place them in front of each other.

Monday 8th: Hannah was invited to attend the CEF camp this week. She was so excited about going. She was up so early this morning, dressed and ready with her bag all packed.
Last night Asher had a bad episode at 9pm. They are happening more often lately which is a concern. Today she had a 1 min Tonic Clonic at 4:15pm. She went very blue, even her hands. So we were very thankful it was again short. 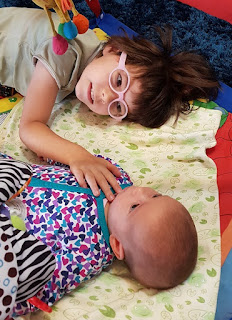 Wednesday 10th: Asher was showing a bit more interest in Anastasia today when she was under her toys. I encouraged her to lie under there with Anastasia, and so she started gently touching her. So special. 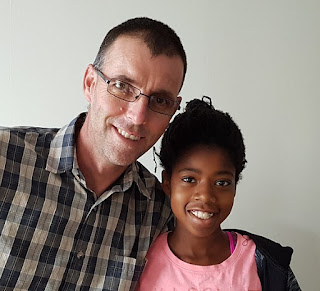 No harm I having a mid-week outing. Brendon and Ruth enjoyed some ice-cream-Sunday's at the tea rooms this afternoon.