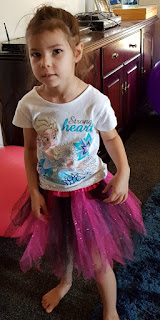 Mon 25th: Brendon and Rachel both worked from early this morning and then as soon as they were home and showered we headed off to the Sampson's for Christmas lunch.
After much discussion and thought, we organized for Asher to spend the day with Rachiel (her teacher aide). Asher has visited at her home a few times and we decided that it would be a much more relaxed and comfortable day for her there. It also meant that Brendon didn't need to spend the day running around after her. And with his energy levels still not back to normal, this was very helpful too.
The photo was taken yesterday when Ruth was having fun putting her jazz tutu on Asher. 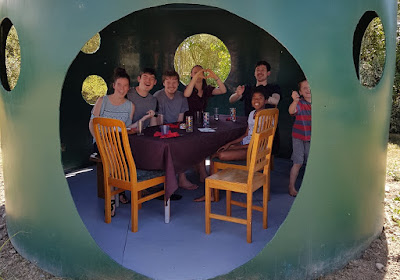 Between the 3 families present for lunch, there were 27 children. :-) So there were tables set up all over the place.
Some in the "hobbit hole". 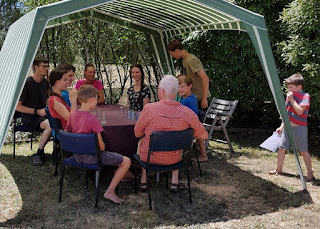 And other under the gazebo.
There ended up a game between the two tables - trying to get as many "visitors" as they could. 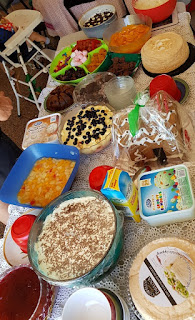 I didn't get a photo of all the lovely food for lunch, but thought about getting a photo of the food laden desert table. What a treat. 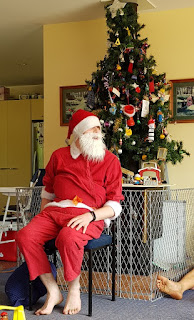 We even had a visit from Santa (thanks David). That was loads of fun and he had a present for everyone!
Thank you so much Susanna for the beautiful bags you made for the girls. You picked the perfect size too as Ruth can fit her Surface in it (like a windows iPad that she uses at school). 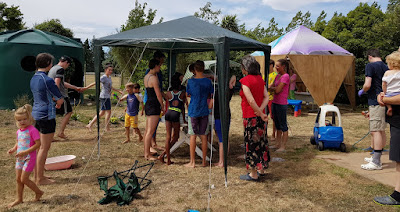 Then there was a massive water fight. Eventually there was a quieter "game" going on (and Anastasia was sleeping) so I popped out to take a few photos.

The hat has water in the top of it, and someone will get it all over their head - just depending on which stick you pull out. Hannah was first up - so she was very brave in having a go. 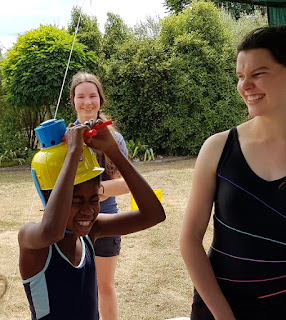 Ruth ended up almost at the end, so with only 3 left and having to pull two out - she thought she would get a dumping - which she did on her second pull. 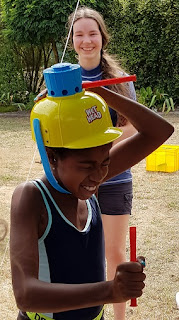 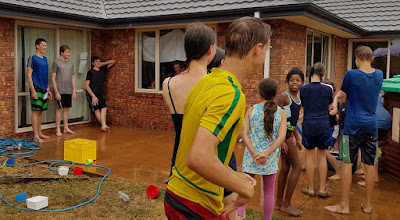 The water balloons finally came out but were used for target practice. 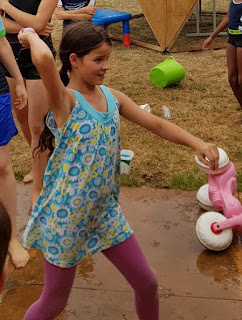 Hannah had already gotten too cold and had come in and changed. But when she saw this going on she went out to have a go too. :-)

Thank you to the Sampson family for a great day. I think back fondly to all the different conversations I had with different people. 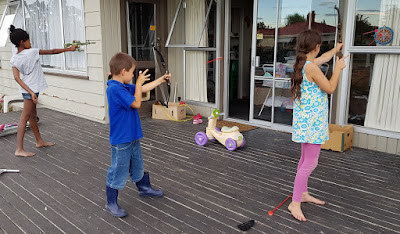 Long summer days are so much fun. This was 7:30pm - enjoying their target practice with bow and arrows and Hezekiah's new gun.

And a little clip of Anastasia smiling and "talking". She is doing it more and more but it's hard to get on film. 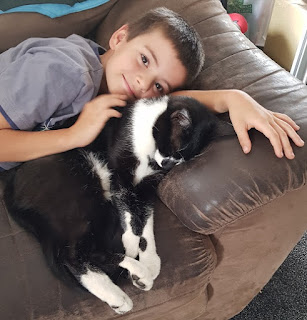 Tue 26th: I love how Anakin came to lie with Hezekiah.

Hezekiah having a go at pealing a cucumber. We were given a bag full of them by the Sampsons. Thanks for sharing your abundant crop with us again this year.

Brendon worked again today - a full day this time. So it was just a quiet day at home for the rest of us.
Rachel had stayed at the Sampson's last night and she joined a few of the older children who went on a hike.
Posted by Buckland at 10:00 PM