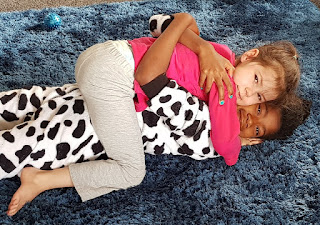 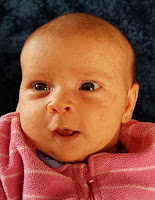 Anastasia smiles so beautifully but it's very hard to catch on camera. 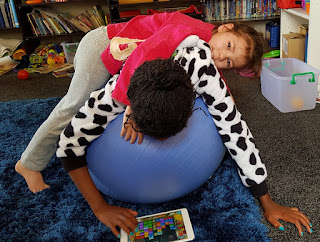 Some more fun with Ruth.
And then Hannah decided to have some fun with Asher too. 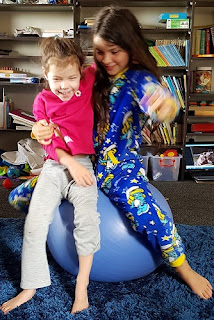 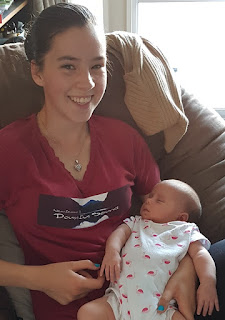 Thursday 28th: Rachel helping Anastasia have a nap this evening.
Charis is a Speech and Language student who has come to spend a couple of days with us to help out with Asher. The children enjoyed playing Chinese checkers with her this evening. Asher had an episode at around 8 though (needing medication to stop it) so that ended their game a bit early.
Once the rest of the children were in bed Brendon and I enjoyed learning about Charis' family and her Christian faith. We had a lovely evening of fellowship. 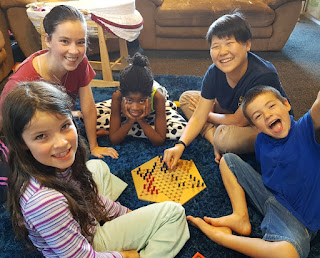 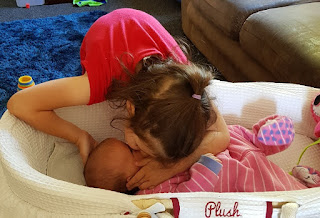 Friday 29th: I was pleased to finally get a video of Asher singing with one of her Bible DVDs. So lovely to hear her singing.

Anastasia cried a little and so Asher came over and gave her a kiss. It was so sweet I got my phone (camera) and asked her to give another kiss so I could get a photo. So sweet. And for the first time ever, Asher then looked at Anastasia and pinched her nose (what she loves to do when naming parts of the face). :-) 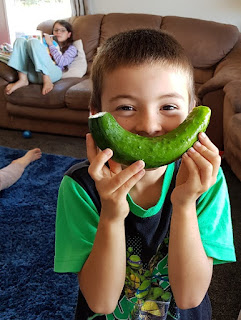 Hezekiah and Hannah are really enjoying the cucumbers the Sampson's gave us. :-)
I would let them eat a whole small one (like this) or half a bigger one at a time. After a couple of days I realized this was not a good idea for Hannah and she has had to have a break. The salicylates were just too high for her with such high intake and it affected her emotionally. 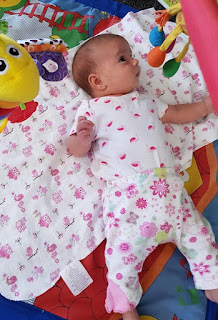 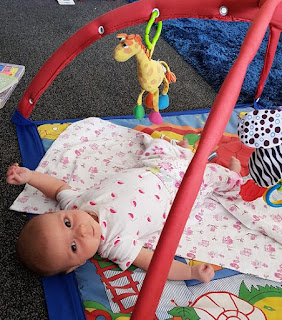 She has started pushing herself around with her feet. She moved quite a bit in the 15 minutes she was lying there. 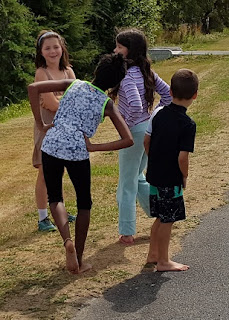 The children had seen the ice cream truck and heard it's music. They were hoping he would come down our street too. As a treat (and to create a fun memory) I said we could buy ice creams. Left: Ruth getting them to dance to be noticed
Right: When he finally came down our street. So excited. 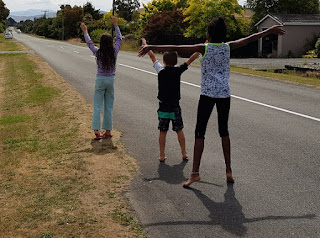 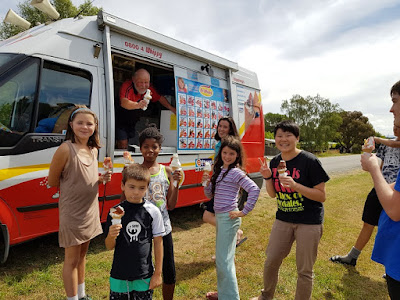 I still remember getting soft serve ice creams from the ice cream truck that rode around our neighbourhood when I was a child. So it was fun to give this same memory to my children. We ordered 9 ice creams (with Charis, Daniel and Brooke adding to our numbers). So it was a good stop for him. And what a good sport when he saw me taking a photo. :-) 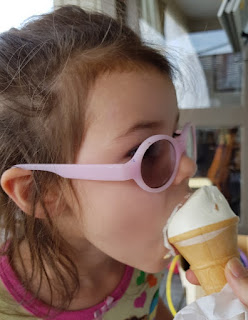 Asher shared mine. I was really pleasantly surprised by the ice creams. They were not as sweet as soft serve normally is, and it tasted like real cream so they were nice and filling too. 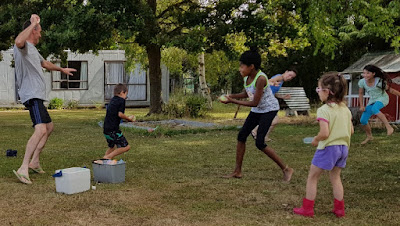 And then it was time for another water fight. This time done the way Rachel prefers - with just water balloons.

Ruth had spent time filling them all. They get used very quickly compared to the preparation time. 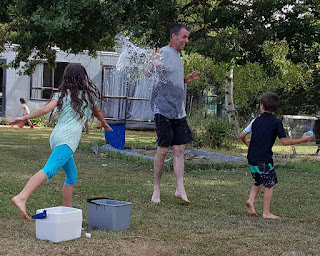 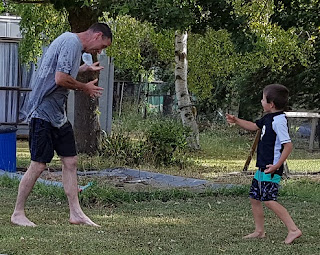 Hezekiah just missed though - Brendon almost caught it by the looks of things. :-)
Posted by Buckland at 10:00 PM

Labels: Music, These make me smile