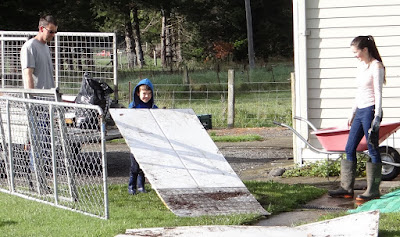 Saturday 23rd: Brendon and Rachel loaded up all the building rubbish that needed to be dumped. Hezekiah was a great help too. He brought this piece all on his own. That's still from the container - so it's great to get all the rubbish taken away. There was so much from replacing the shower - so it had to be done sooner rather than later.

Almost half a tonne of junk. 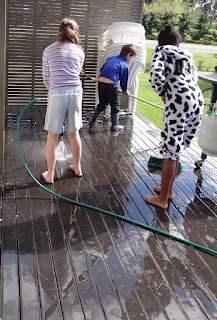 While Dad was out I asked the children to clean the deck. The chooks keep coming up here when it's raining and have made such a mess again. We have a plan to lock them up in a bigger sheltered section when it rains, so it was time to get the deck clean. After a bit of working out how it's done, they worked really well as a team with water and brushes and got it looking SO good. 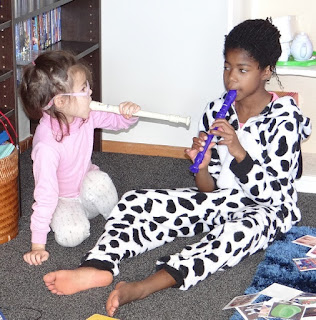 Daniel arrived before lunch for another weekend visit. I didn't get a photo of them heading to the park this time - but it was a much anticipated outing for Hezekiah and Hannah. They got the old chook area sorted first - so at least we have somewhere dry to lock them up if they keep wanting to come onto the deck to get out the rain.
After another week of no seizures Monday through Friday, Asher had a seizure today at 4pm. It took half an hour to get her settled for her sleep. Thankfully just the one today (not like the 2 last Saturday). 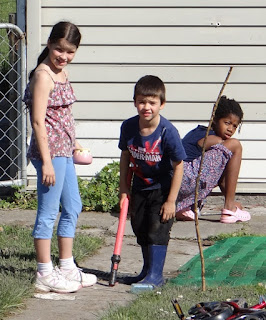 Sunday 24th: Today ended up being a bit of a repeat from last week though. She had a seizure at 11am again (during church) and then another at 6pm. Thankfully the day was better for her this week, but I think she knew something was not right before the 6pm one. She kept coming to me, almost for comfort, and I could see she wasn't looking great. I had just thought about putting a nappy on her but didn't get time. I think in years to come she would be able to tell us that one is coming. Most of the time they hit her by surprise though. Like this morning. She was happily hugging Dad while he sang and looked so comfortable and relaxed. I was enjoying watching her - and then saw as it hit.
Ruth was a star this afternoon and got the other two busy in games outside.
This allowed Rachel and Daniel to have a bit of time in conversation just with each other. :-) 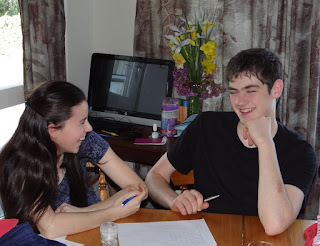 Rachel got some lovely flowers from Daniel. It was nice that they ended up behind them in this photo.
Daniel ended up staying longer than planned this afternoon as we watched The Hunger Games in the afternoon. The movies came on TV recently and although I wasn't sure about the girls watching them - we decided to watch it with the older two while in Hanmer. Rachel decided to do her last English Personal Response on the first two movies. So although it was mainly because we had decided that Hannah could watch them too, Rachel enjoyed watching them again and having Daniel join in. She has written a very good response on a number of the themes in the movies. They are very thought provoking.

Monday 25th: Ruth had her guitar out this evening as the Kapa Haka teacher has asked her to practice a song for the end of year assembly. Asher wanted to join in, so we got "her" guitar/harp out and Hezekiah joined her in making a bit of music. 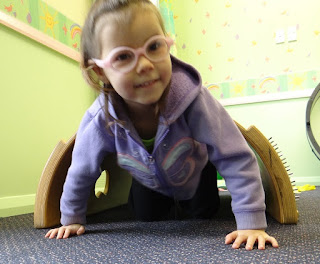 Tuesday 26th: Champion Centre this morning and then a hospital appointment with her neurologist after lunch. Her OT (and the team leader) from Champion Centre came with to the appointment this afternoon to chat about getting a letter from him in support of Asher's ORS application for her school start in Feb. (Ongoing Resourcing Scheme for students with severe and ongoing needs for special education.) I'm so thankful for all the help the Champion Centre give us through this time of transition to school. 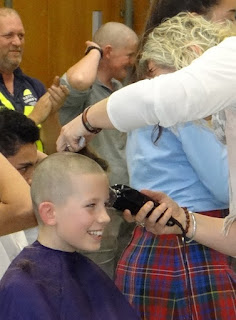 Wednesday 27th: Final school assembly for the term this afternoon and I attended as I usually try to do. Today was an extra special assembly though with a lot more parents present as there were 12 students who shaved their heads for Shave for a Cure. There were 5 girls and it was quite emotional watching them. They were so very brave. This is Ruth's friend. She and another girl in her class raised $800 and $900. In total the school raised over $3,000. What an amazing effort.

I got Hezekiah's birthday cakes made this morning while Asher was at preschool. Once cool they went into the freezer. They will come out Thursday evening and then I will cut them into the shape while frozen (much easier to sculpt with frozen cake) and then Friday morning is icing time.
BELOW: Fun this afternoon. Lately Ruth has often gotten Asher onto her back. She is creating a nice new game with her. It was also so fun to hear the games Hezekiah and Hannah were coming up with. 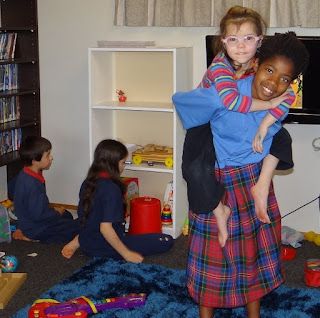 Unfortunately this peace fell apart when I left for bible study at 6 and Brendon was out from 6-7 at karate. By the time he got back it was more like a war zone. We had planned to have them all home next week while Brendon comes with me to a midwife appointment. We will have to make other plans though. It will have to be "Divide and conquer". It's hard enough for Rachel to watch Asher, so we can't let her have that extra burden of a possible conflict amongst the others.

Thursday 28th: Normally Brendon takes the girls to dancing, but I was so tired this afternoon that I took them so that I could nap in the van while the practiced. I had been struggling to stay awake while watching Asher in the afternoon, so I knew 3 1/2 more hours would just be too much. 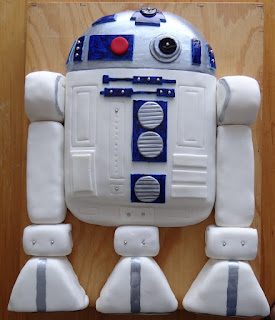 Friday 29th: Cake day today as it's the last day of term. So although Hezekiah's birthday is only on Tuesday, it was nice to celebrate with his class today.
Thankfully Josie came around and helped with Asher for 2 hours this morning, so Rachel could help me. She was a great help in rolling the icing out (and colouring the blue). Other than the big piece for his body, she rolled all the rest for me. We had a great production line going. 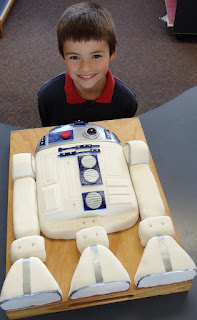 As I covered a piece, she got the next piece of fondant ready. It was also nice having her input on where to put what "decorations". She also always makes the butter cream icing. She made that while I was taking the children to school so I could get started asap.
I was glad I had done the cutting the night before. I worked solidly on the cake from 9 till when we left at 12:15 to take it for them to have at lunch time.
Hezekiah has been looking forward to today for over a week. 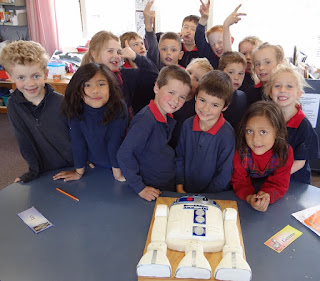 So nice to share this memory with his class. And there was enough cake for Whero class too(where he still has a few friends).

Singing Happy Birthday. The blue candles suited the cake well.
When Hezekiah got home he asked if he could have his presents today (he knows Hannah has bought him something). He will have to wait till Tuesday though. He will have a few friends over for a play in the afternoon (of his actual birthday), so it will be a special day for him and nice that he can look forward to that too.
Posted by Buckland at 10:00 PM