A tired Mum but many blessings 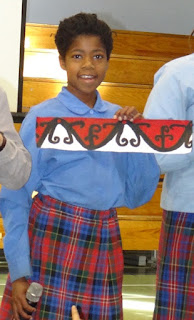 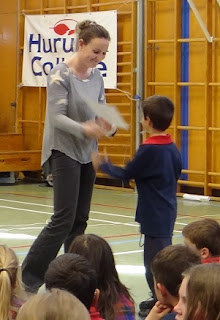 Friday 15th: Ruth's class showing some of their artwork during primary assembly this afternoon.
I had Asher with me again this week and she did really well sitting in her pram through it all. She had her church bag of toys to keep her busy but did enjoy stopping to clap when everyone else was. :-)

Hezekiah was pleased to get a certificate. 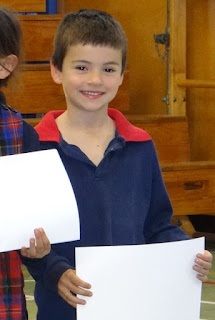 Always such a highlight for the children if an aspect of their work is acknowledged in this way. This time he got one for "being an enthusiastic participant in group discussions." 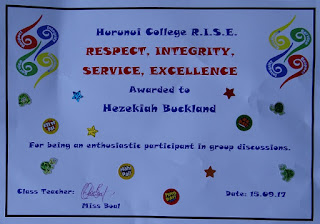 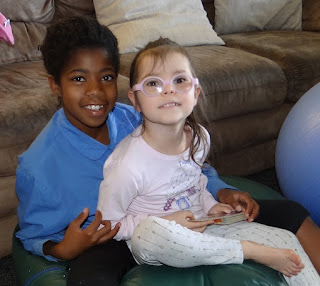 Story time with Ruth this afternoon. Asher is getting a lot better with books and is enjoying spending more and more time having people read to her. It's still very limited to books she chooses (ones that she knows well), but it is improvement. 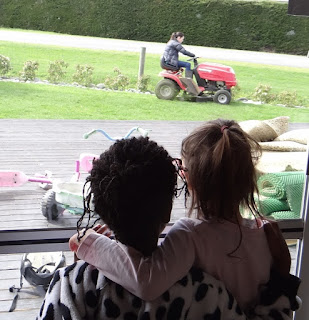 Saturday 16th: With rain forecast for tomorrow it was great that Rachel could get the grass cut today. It had grown so much and it always looks so very nice when just cut.
Asher always loves running to where she can look out and watch her. Ruth was thrilled to have Asher put her arm around her while they watched.
Not long after this photo was taken, at around midday, Brendon and I were outside chatting while we watched Asher on her bike. She unfortunately had a 1 min TC. Thankfully it wasn't a big fall off the bike. There was a lot more shouting at the start of it - which always tugs so at the heart strings.
She took a while to get to sleep and didn't even get to have a nice long rest as she was woken at 1:15 by another TC. This time going 1 1/2 minutes and it took her even longer to get to sleep.
We are thankful she had the whole week break (Monday to Friday with no seizures). 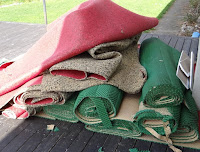 The previous 10 days had been so hard. I remember on Tuesday evening Brendon commented on how great it is that she has had such a nice break. And it had only been 2 days! It often feels like that though, and so having 5 days off was a real blessing.

We have had all the old underlay lying on our deck this week, so today was the day to get it sorted (and used elsewhere). Brendon took all the green pieces and used them to cover the weeds between the drive and the wood pile. 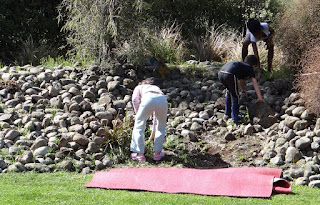 We don't really want to spray there as the chooks often peck around there.
And then I asked if it was possible to re-do the "hill" in the corner. The weed mat has long since stopped doing it's job. And again, it would be ideal if we didn't have to regularly spray this area. I got someone to weed it a few months back but the grass is getting a bit out of control again. So these three helped move the rocks out the middle section (the width of a piece of underlay). 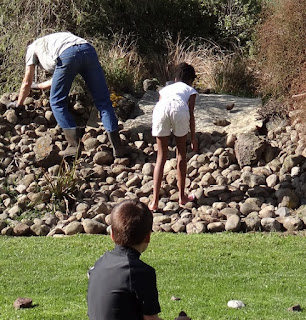 Hannah and Hezekiah got rather tired out, but Ruth kept going and helped Dad put all the rocks back once the underlay was down (it's only red on the one side - and a brownish colour on the other - so that's it in line with Ruth's body). Ruth commended the next day on how nice it looked. So at least she could see how her work had paid off.
Sunday 17th: I slept quite a bit of Saturday morning but was still really tired on Sunday. So I stayed home from church and ended up sleeping the entire morning. I got up for lunch but spent most of the afternoon in bed too. The last week really took it's toll on me.
Asher had a seizure at 11am during church. She had a bit of a sleep on the way home but just seemed out of it the rest of the day. She kept coming to me in the bedroom, and then going back tot he rest of the family. She just seemed totally unsettled. Eventually at 7:30pm, just as we were getting her ready for bed, she had a seizure. We had been waiting for it the whole afternoon, so weren't surprised by it. Thankfully she didn't take too long to fall asleep and had a quiet night. 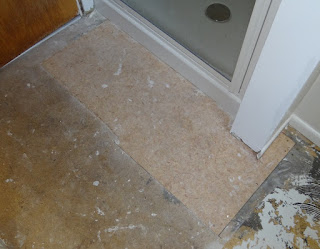 Monday 18th: Asher was fine by the morning and had a great morning at preschool.
With the extra shower leak that we didn't know about from the earthquake, the builder had to lift the vinyl and fix a whole floor board before he could install the new shower. So today we had the carpet company come in to put new vinyl in the bathroom. So good to have a nice clean floor.
The painter had popped in on Sunday afternoon to sand the plastering in the bathroom and "seal" it. So although the room is not painted yet, it is usable. We were not sure when the bathroom would get done, so it was a separate job for the painter and he just squeezed the bit of work into his week. He will finish up the painting when he gets a gap (as this wasn't part of the original plan for him). 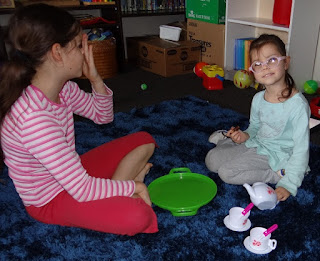 Tuesday 19th: A very busy day for me today. Off to Champion Centre first thing (no photo taken today) and then to Rangiora on the way home to see my midwife. Thankfully we finished early at the Champion Centre and so I could renew my drivers licence in between the two. We had quite a wait as it was the lunch time rush. The lady was very apologetic for my weight though - seeing Asher getting a bit frustrated in her pram and me heavily pregnant too. Once I was at the front it was really quick though. What a very visual reminder that we have now been in NZ for over 10 years. At least my drivers licence is sorted for the next 10. :-)
Tea party with Hannah this afternoon. 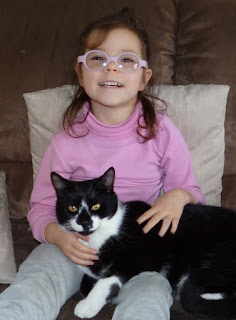 Thursday 21st: It was sweet to hear Asher calling the cat to  "come here". Anakin wasn't responding, so I lifted him up onto her lap. She loved cuddling him today. 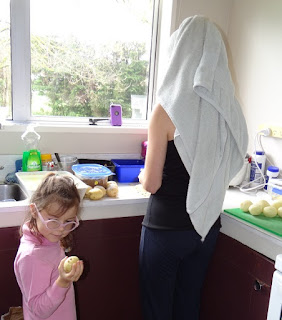 Whenever Rachel peels potatoes Asher likes passing the potatoes to her. I think she must have heard Rachel peeling today as she quickly headed to the kitchen to "help". 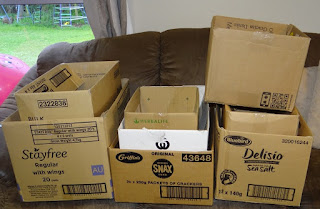 This afternoon a friend came over to help with some unpacking. She and her daughter unpacked and sorted the top two long shelves (and emptied 8 boxes). What a wonderful blessing. It took me a couple of months to slowly get those all packed. So it was wonderful having them all unpacked within an hour. It was a job that would have taken me a very long time, and one that I was not at all motivated to get to.
I have realized (perhaps out of desperation and exhaustion) that there are people around, like my friend, who offer to help, but it takes courage to ask for the help. 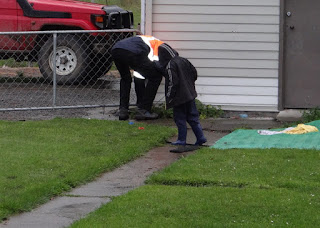 So another request I made was to a friend who helps people with different jobs. We have a drainage problem between the house and the garage and so when we have a lot of rain (like we did this week) this area if often a huge puddle. It's hard for me getting Asher to the car when it's like this as I can't just get her to walk along the path. I was amazed that he organized to come and have a look and work at fixing the drain this evening (I only told him about it this morning). Hezekiah was keen to help him and spent an hour at there "helping" (and chatting away). He was then sent inside to dry off while our friend continued. 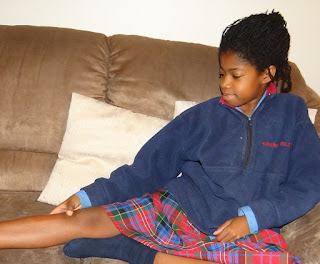 Although we will probably have to replace the underground drain at some point, he has made a huge improvement and when I left on Friday morning (after another night of rain) I could just walk Asher along the path. What a blessing.
Ruth hurt her leg on Tuesday at high jump. She has been resting it this week (no more high jump and no dancing on today). It's still rather sore though. When Brendon massaged it for her this evening we realized it was a lot higher than we first thought. He had first thought it was a shin splint, but it's closer to her knee. She saw the physio on Friday after lunch and she explained what was going on. It's not a major issue and should clear up on its own quickly. 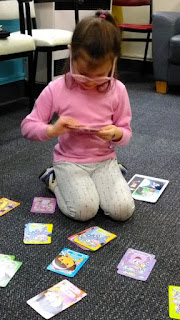 Friday 22nd: Asher had a follow up eye appointment today. We had to leave at 7:30, so it was a very early start. We were however still slightly late as some people jumped the cue at the shuttle. I was standing in the rain waiting to pay and a few quickly got past and paid someone cash for a ticket and got on the shuttle leaving just 1 seat left when we arrived.
Thankfully after that disappointing start, the appointments went much better than any previous ones. We had a very long wait between the appointments (the first one where they put drops in to dilate the pupils). She spent ages with her iPad sorting game and rings that she links and un-links. When we were called we just took the games to carry on. The dr was brilliant and got to work with the iPad to see into her eyes. Her glasses are still the right prescription. He then wanted a better look without the glasses, so I switched the iPad off and told her she had to look at the light first, then iPad. She is used to having "first.... then ....." plans, so she did really well and he got a few seconds to look in each eye. Without any screaming or shouting or hitting. What a blessing.

This evening Ruth asked Dad if he wanted some cheese and gherkin. She didn't just give him a gherkin with slices of cheese (the way he quickly makes that snack) but went to the effort of creating a fancy snack (with pickled onions too).
Posted by Buckland at 10:00 PM