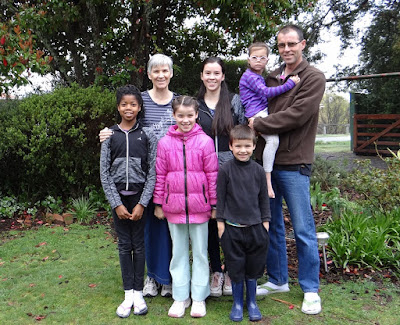 Monday 11th: We had my tripod with, so decided to get a new family photo or two. :-) 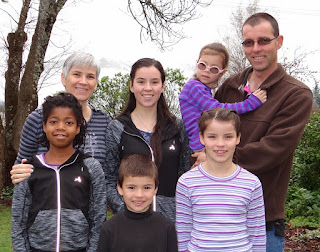 Just a pity we could not capture the beautiful snow capped mountains behind us.
Packing up this morning. I was very tempted to start packing yesterday, but realized the packing to go home would be much easier than the packing to come. We don't need to think about what needs to be packed - but just pack everything that is ours. :-) 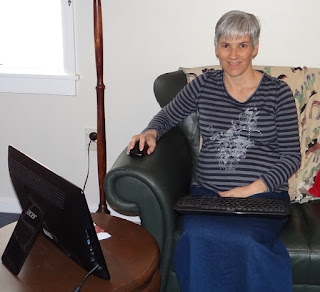 I asked Rachel to take a photo of me at my computer before I packed it up. This was how I managed to keep my blog up to date while we were away. The biggest reason for having it with though was to keep up with e-mail correspondence around the repair as well as paying bills ect. It's so handy having an all in one computer - as well as cordless mouse and keyboard. We didn't have wifi at the house, but I worked out how to create a hotspot on my phone and could finally get to use some of the data I have been collecting over the last year. It came in very handy this week. 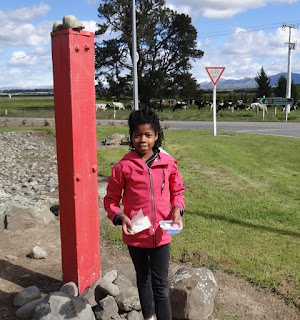 On our way home we stopped at the Red Post geocache spot for Ruth. We had planned to try and get more done on the way home, but forgot to keep her surface out for looking them up (and my phone doesn't work on the site). At least we got the one though.
When we were almost finished our fish and chips lunch I went to pay and realized I had lost my card when I went to the shops this morning. I had received a call just as I was paying, so although I didn't even give the cashier my card, I didn't put it directly back into my "wallet" (which is my phone cover). I hunted through the car so many times I lost count. I called the shop but it hadn't been spotted. So thankfully I could cancel that before any other transactions went out on it. It's just such a pain though as I have to wait 2 to 3 week for the replacement. 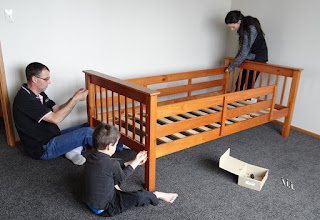 Just one more job added to the list of things to do. I have a few automatic payments set up on the card - so I will have to make those payments another way over the next month.
The carpet company said they would be done by 2, but when we got back at 1 they had already left. I had hoped to send some pieces with them to get edged (into nice mats) but I will have to organize that another time now. Ruth wanted to get to school for the last two periods, so she got sorted and I dropped her off. 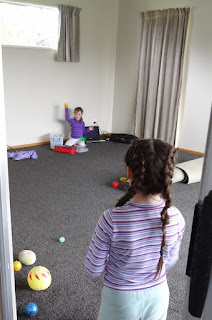 Hezekiah enjoyed helping Dad and Rachel putting Asher's bed together. Our goal for this afternoon is to get Asher's bed and our bed set up. Hannah helped watch Asher so that I could also get some cleaning done. We had quite a shock when we arrived back and realized the carpet company had not even vacuumed once they were done. The kitchen counters were also full of dust, so I at least got the kitchen clean and also got some basic things unpacked.
It was good to not have the pressure to have the whole house set up today. Hannah and Hezekiah headed off just after 3 to go home with the Spencer's for the next 2 nights. Ruth will be going home with her friend on the bus this afternoon and staying there for 2 nights as well. Hannah was especially excited about going on the bus to school tomorrow. 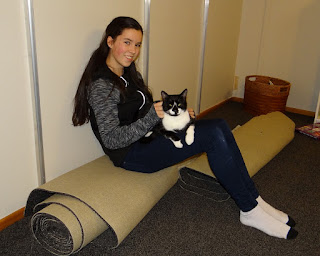 The 4 of us that were left at the house headed out for some pies for dinner and then Asher and I headed off to fetch Anakin. He was thrilled to be home and with his family again.
Rachel went out to the garage to see if she could find a way through all the furniture to some of the lounge furniture. It was the first to go out so that everything else could easily go out the lounge. So it was not easy to get to now. She managed to find a way though and wonderfully she was able to help Brendon get it to the house (the big 3 seated one). So at least the 3 of us could sit comfortably this evening and even enjoy a movie together and relax a bit after the afternoon's work. 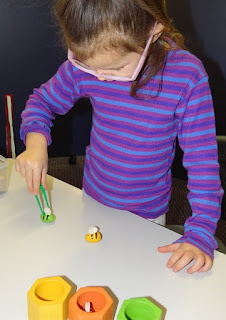 Tuesday 12th: Asher and I headed off early this morning for Champion Center as usual. I was especially glad to be able to just get away from all the boxes (and dust) for a while. I had felt quite overwhelmed by the end of Monday with all the work that still needs to be done.
Asher was quite pleased with working out how to pick up the bees with these tiny tweezers (you have to pick them up by their wings). She has used very small tweezers in the past, but not lately - so it was a bit "new" to her (at least with this Champion Centre teacher). 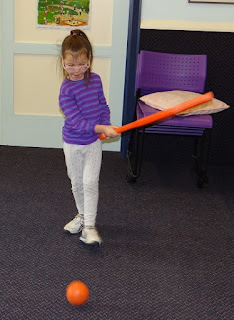 After the session we had Asher's IP. I had brought her church bag with along with our laptop and some of her music DVDs. She played happily for most of the time next to me and then enjoyed a bit of time in the playroom.
It was again a good time with the therapists, discussion very specifically Asher's transition to school. She will be 5 in February, so her school start is not far away at all. Thankfully our focus is on getting her settled, comfortable and safe in the new environment, and this is the school's first goal too. We are not too worried about her "education" as such. As the headmaster said - that will come. We first have to work out all the practical things of her just being there. 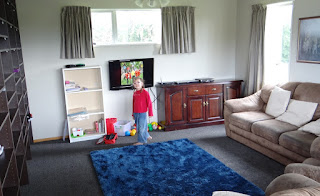 It was wonderful to come home to a home that looked more like home. Brendon and Rachel worked really hard today, bringing in all the furniture and some of the more important boxes.
We have decided to put the dining room side board into the lounge and I'm pleased with how it looks. The lounge actually looks bigger now (the chairs moved just a bit further away from the TV wall). And the dinning room has that little bit of extra space which we needed (especially me with this expanding tummy - it was often rather difficult getting around the table). 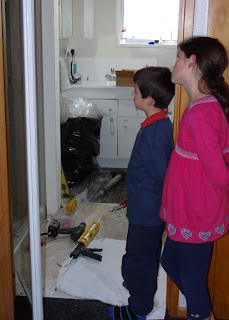 It was another very busy day, so we were thankful to only have to prepare dinner for the 4 of us. We had another nice quiet evening, resting after the busy day.
Wednesday 13th: The children were excited about coming home after school today. They loved staying with their friends (and traveling on the bus) but where also excited about being home and seeing Anakin again. 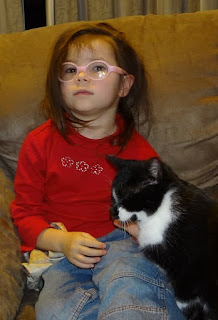 (Right: Anakin even giving Asher some love - he is very pleased to be home with his family again.)
The builder was back today to finish up the shower. Hannah and Hezekiah liked watching what was happening. At one point I heard Hezekiah talking a LOT, so reminded him to not be a pain. The builder said he was fine, just being curious. "And that's how you learn." Hezekiah had fun looking through some of his tools and asking him questions about them. I was thankful he was happy to chat away to Hezekiah. 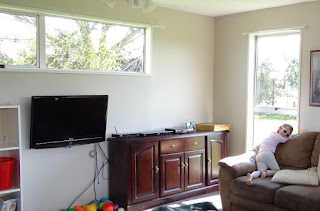 Thursday 14th: Asher's EIE does cleaning around the area for people, so I asked her if she would come and help me to get the windows clean. She came today and suggested we just take the dusty curtains down and wash them. So she helped take down curtain and hang them up again once washed. Thankfully we had the new curtains from the curtain bank for the bedrooms, so it was only the lace curtains and then the dinning and lounge that needed to be washed. It was wonderful to get so much done but also disappointing when we realized the lining of the washed curtains (specifically the lounge) just disintegrated in the wash. So it was like the curtains were just full of powder. 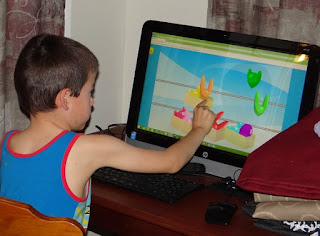 So although we had a great start with clean windows and curtains, it was very disappointing to still have all the dust being created in the lounge from the curtains (even after I had removed the crumbling linings). Thankfully I contacted the curtain bank again and told them what had happened. They have said they will look out for curtains for us for the lounge.
While the girls were at dancing, Hezekiah got to use Rachel's computer for his Math Seeds (the iPad was flat). It was fun using the touch screen. He is starting to learn about dividing - although in a very basic way. I think he calls it "sharing". 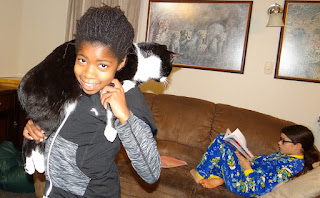 Back from dancing and Hannah got some reading done before bed. Ruth decided to use Anakin as a neck warmer. He was actually so relaxed up there (until I brought the camera out).

The girls got their exam reports today. We were very proud of them both for getting Very Highly Commended (80% - 84%). A great result for all their wonderful effort. 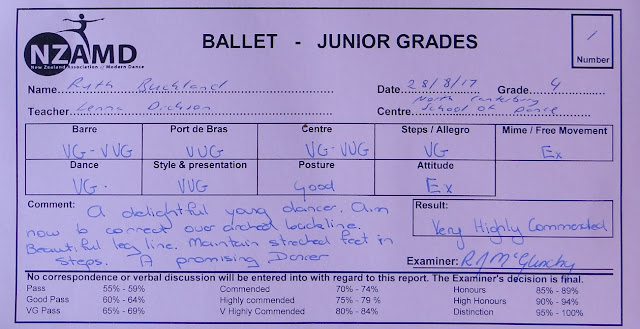 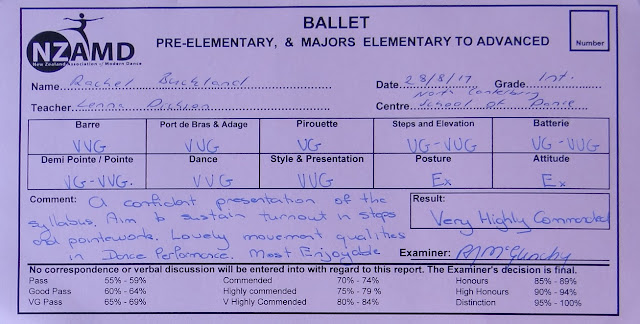