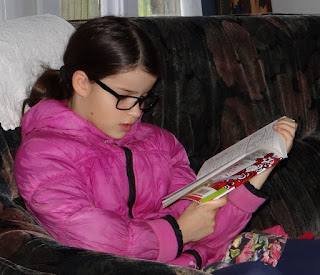 It's lovely to see Hannah enjoying reading. Thanks Ruth for introducing her to these books.


We had headed out so many times in the hopes of getting to the maze, that today Brendon headed out first (so we didn't go to all the effort of getting everyone ready first). And we were thrilled to get the call that they are open. So we all got ready and headed down.
BELOW: This was the view of the mountains just before we went in. So pretty. 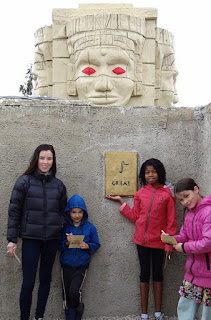 With Asher having a Kiwiable card (explaining that she needs a support person), the owner was happy for Asher and I to go in without charge. We were especially grateful for this as unfortunately, just minutes after taking this photo, Asher had a seizure. 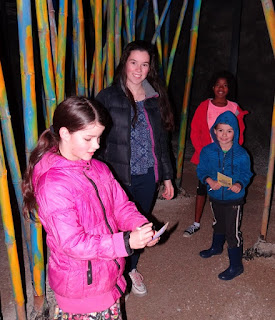 Brendon dropped us off at home and went back to finish the maze with the others. The owner was so kind, he said Asher and I could come back later. As Asher slept for quite a while we didn't bother taking her, but Hezekiah went back with me as they were so excited about how much fun it was. Thankfully they did also take a number of photos. This photo taken with a flash to see everyone's faces nicely. 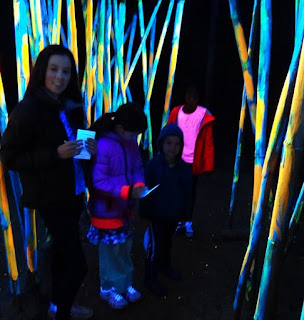 And then without the flash to see how affective the lighting was. When I came back later with Hezekiah I got a fright in here as there were strips of rubber hanging in the walkway and Hezekiah had expected them. So he grabbed them and moved them out of his way as he walked. As I came behind him, he had let go and it fell into my face. I told him something had fallen on me, and so he showed me the next lot of rubber so that I could avoid them. :-) 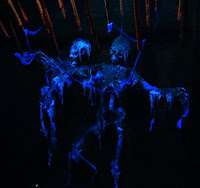 Very effective skeletons in the dark area.
In the next normal maze area there are a lot of little air puffs as you walk past. It was fun talking as a family about what scared each of us. Even when we were expecting things. The girls had told me about the wall that starts falling down as you are next to it with the "look out" shouted. 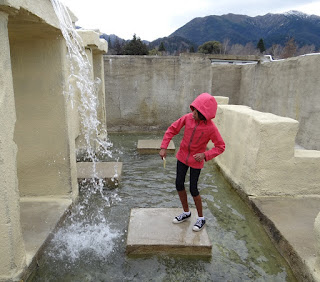 And even though I was looking out for it, I still got a bit of a fright.
There is this challenge at the end. Hezekiah was too scared of doing it with them, so that was why he was the one that came back with me later. To overcome his fear and face the challenge. There is a walkway to the side, so it's easy to avoid. I was pleased that he had the courage to go with me though. By the time we got there the water pressure must have been different as the water was splashing onto the first blocks. So we had to wait off the side and make two big steps between the splashes. Thankfully the one was a bit slower than the other - so I pointed that out to Hezekiah and after a bit of hesitation he gave it a go (and we didn't get wet). 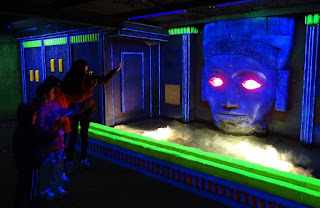 Everyone also got a card to collect clues through the maze. When you get to the end you present your card and receive your "reward" (a chocolate coin). Then we realized why the fence outside was covered in silver and gold. :-) 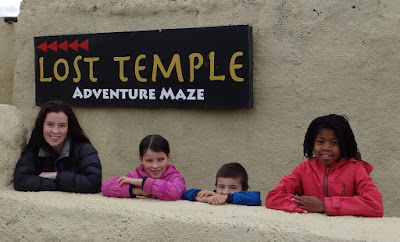 The maze was really a lot of fun and we are glad we finally got to enjoy it. The weather hasn't been great this week, so we were pleased we didn't miss out on this activity. Even if we couldn't get to do it together as a family.

We had a bit of a shake after lunch.  It's been a while since we've felt one. Hannah got a bit stressed again, but thankfully quickly relaxed. I'm glad it was during the day and not just as she was going to bed. With the rain and wind that we have had through the week I often wondered at night if it was wind or an earthquake that was making the house squeak. So this shake confirmed how different it is. 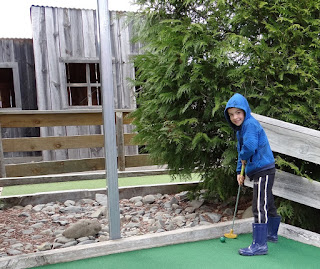 Brendon said he would stay at home with Asher and allow her to just rest while I took the children back to play the round of mini golf (we paid for a combo with the maze and golf).
A nice shot of Hezekiah. That building behind him is a part of one of the holes. 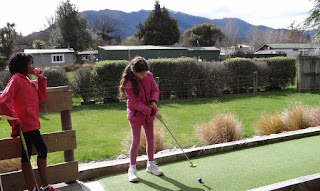 And Hannah with some of the mountains behind. 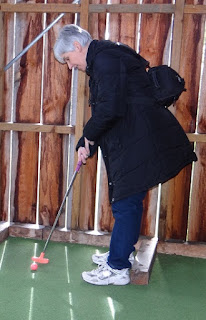 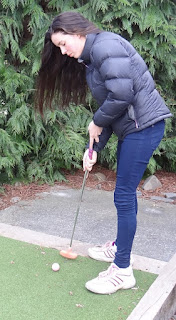 Rachel ended up not being in any of the photos from the previous day of mini golf, so it was good to get a shot of her today. 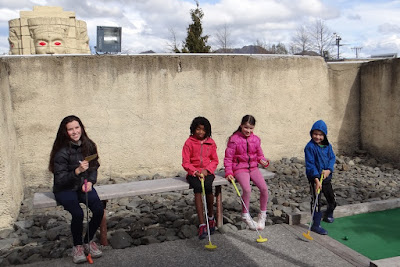 Coming to the last few hole (with the maze just behind). 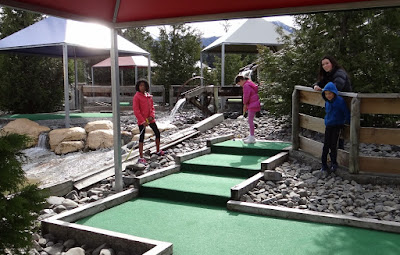 I wanted to get a photo with some of the water feature in. It is a really creative course. 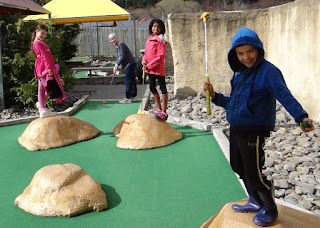 The last person on the last hole, I asked Rachel to take another photo - and I got a hole in one again. I should have asked her to take more photos of me though the game. :-)

We had a fun time and were really grateful for the dry afternoon. 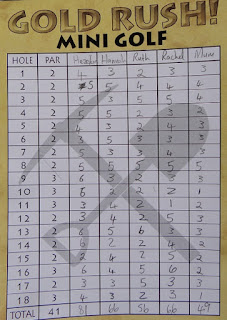 At first I had suggested we only score at a max of 5. At the 9th hole the girls decided to rather make it a max of 6.
Hezekiah was happy with every score he got. Ruth did well today and beat both Hannah and Rachel. I was glad I managed to do well. It's been so many years since I have played. It would have been nice to have a competition between Brendon and I, but it wasn't meant to be. :-)
Ruth took a photo of my "bump". I don't think I've had one yet, and I'm already 31 weeks. Just over 2 months to go now. 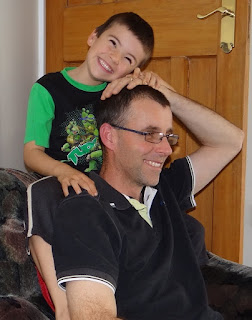 Hezekiah was in a funny mood this afternoon and had fun just playing around on Dad's shoulders.
Posted by Buckland at 10:00 PM