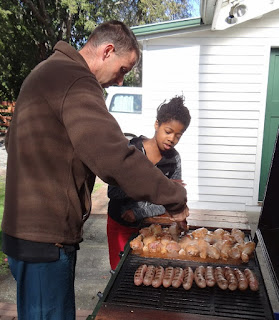 We had all our meals planned for this week, bringing many pre-made frozen meals with so we could just relax this week. We had planned for one "take out" meal but decided it was just too expensive. So we decided to do another BBQ and got some more sausages and some drum sticks and marinade. Cooking marinade chicken like this reminded Brendon of his childhood. They had chicken braai's almost every Sunday. I remember them too through our years of dating. 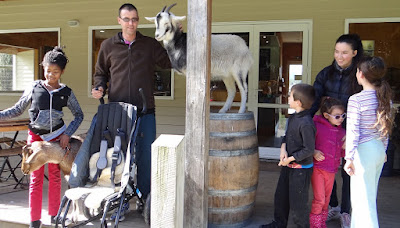 After lunch we made the most of the clear sky and headed to the Animal Farm. It drizzled slightly when we arrived, but it stopped quickly and we had a lovely time.
These goats noticed as soon as we walked through the door and came over to see if they could get some food. :-) 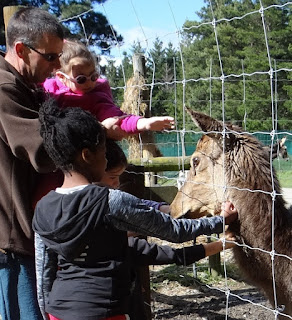 This deer was so friendly. 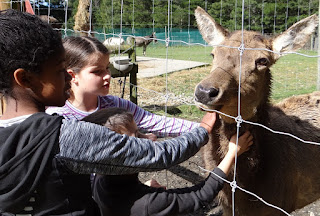 He enjoyed being wiped and petted, like a dog or cat. 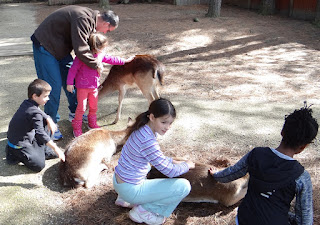 These baby deer were just lovely. So friendly. 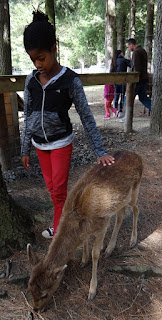 I just missed getting a photo of Ruth with this deer while it was lying down. 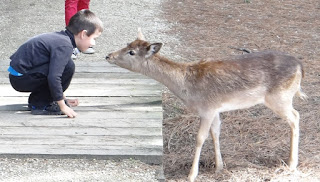 They have learnt very quickly that people have nice good food for them. I just loved how this one came face to face with Hezekiah.
It was only then that the food bag came out with treats for them. 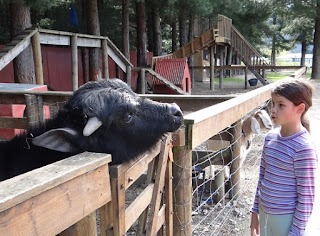 I didn't get photos of the goat enclosure next to this one (seen behind them). It had a great climbing activity for the goats, and for the children. They climbed up some stairs and as soon as they started the goats came up to say hi (and get some treats).

There were a number of little chicks around. 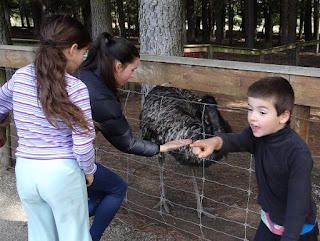 Feeding this emu was fun. It would often throw it's head back to get the pellet into it's mouth. 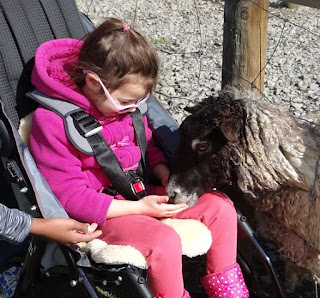 Just then Asher had a bit of an "episode". She came over for a cuddle and clearly didn't feel great. Thankfully it didn't develop into a seizure. We got her settled in her buggy and we got to enjoy the rest of the park.
We got her giving some food to this friendly sheep. 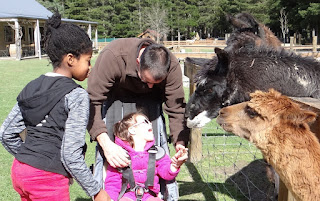 And she laughed so when the Alpaca took the food from her hand. 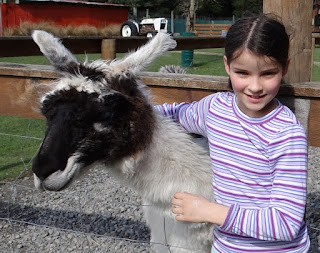 They had llamas too. Posing nicely for a photo. 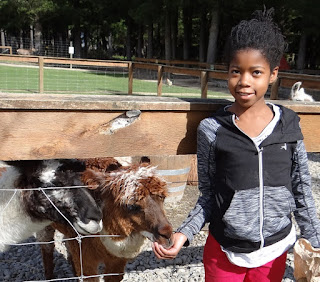 We loved this brown one with it's curly hair. 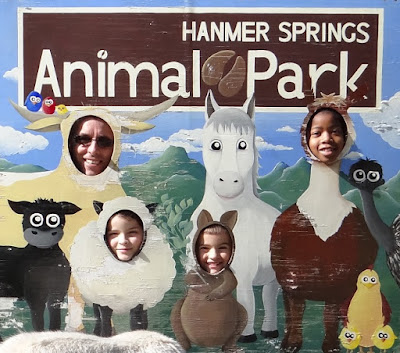 I'm so pleased we had enough dry weather to enjoy this time together. 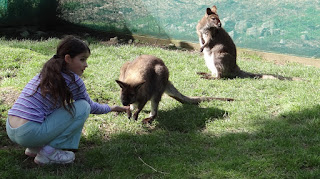 We left the wallaby for last. It was really special being able to get so close to them. 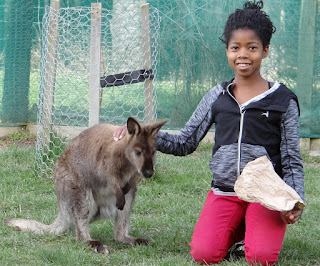 A lovely one of Ruth. 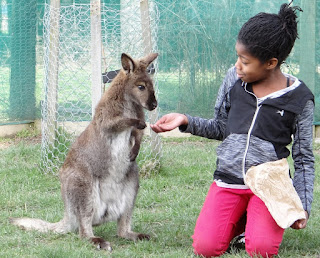 And such a cute one with the wallaby up on it's back legs. So sweet. 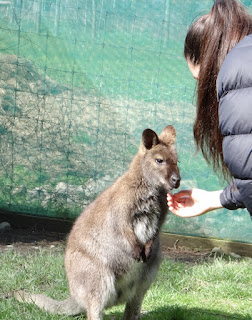 Rachel got up close too. 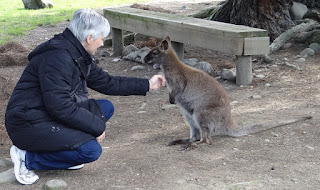 And so did I. I had to ask to get a photo taken so that at least there was one photo with me in today. :-) It was really lovely how friendly they were and how we could get to wipe them. 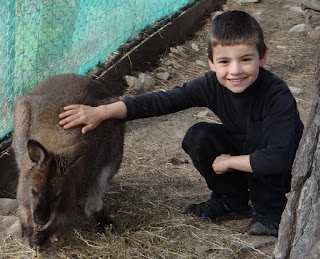 A great one of Hezekiah. 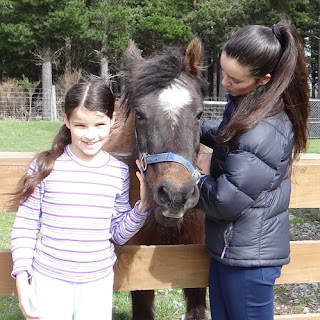 I missed getting a photo of Rachel with the horse early. She managed to call it over for another cuddle so I could get a photo. She would have been pleased if she could have just spent the time grooming it. :-) 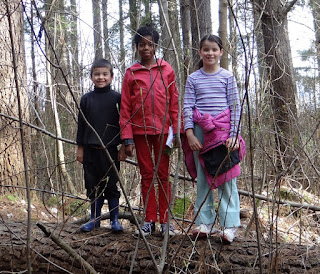 Later in the afternoon Brendon headed out with these three to try and find a geocache in the dog walk area. They looked for ages but didn't find it. 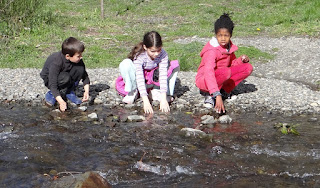 They had a good time though, and got to enjoy the area. 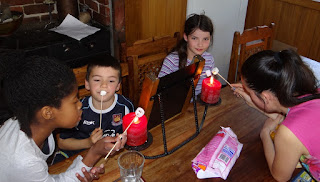 We got some marshmallows in the Red Cross box we received last month. Rachel had asked that we put them aside for a surprise on our holiday. So they came out this evening for pudding. Roasting the over candles worked fine. :-)
This evening Asher had another strange episode. We had the timer on and it lasted for around 16 minutes. She was breathing well and talking, but was clearly having some strange neurological activity happening. 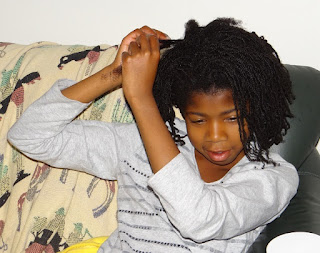 Ruth has been an absolute star this week and has taken over the job of un-doing the old braids. We only had about 30 to re-do when we left for holiday, but my back takes a lot of strain with it, so I hadn't even bothered for the first few days that we were here.
Her first goal was 2 per day. She quickly realized that 3 was doable, and then even upped it to 4. So after 3 days of her working, she rinsed them all off and I got to just braid all 9. After a few more days I will be able to braid more than 10 again. So we are really close to having them all re-done now. Yay!
Posted by Buckland at 10:10 PM