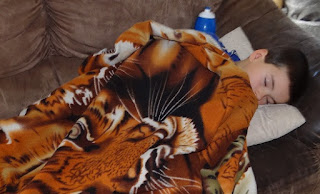 Mon 14th: This is a good summary photo for the whole week. Hezekiah started with a fever on Sunday evening and it lasted till Wednesday morning. It got up to 39, so was high, but not dangerous. He slept solidly for Monday and Tuesday and then just had a quiet day at home on Wed. He was wanting to go to school on Thursday.
Ruth was off Tuesday through Thursday with 2 solid days of fever as well. Brendon was off for Tuesday and Wednesday (no fever but clear symptoms like headache, sinusitis and sore throat - which the children didn't have). And then Hannah was off for Wednesday and Thursday. She didn't have too bad a fever and it didn't last as long as the others either. 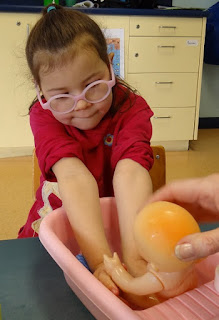 Tue 15th: Thankfully Asher and I were fine, so we could head to the Champion Centre today. Unfortunately she had a seizure in her last session, just before group music. She was outside and on the swing bridge when it started. So she fell back but didn't get hurt. I'm glad she wasn't in the tunnel when it happened, as that would have been hard for us to get to her. Thankfully it was just a 1 min TC again, but she was very unsettled afterwards. Her OT was outside with us and insisted on carrying her in (which I was grateful for - she is getting so heavy). Once we had her changed and I saw that she wasn't going to settle, we headed off home and she fell asleep in the car.
Wed 16th: Asher had a 1 min TC at 1:30pm today. Her and I both had a good long sleep in the afternoon and then Brendon took over with her when she woke up so that I could sleep longer. I was struggling with a headache this afternoon, and being very tired. Thankfully the afternoon rest was enough for me and I felt better the next day already. 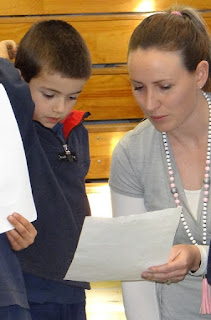 Thu 17th: I had hoped Asher might avoid the fever but it started this morning. She had a 1 minute TC at midday but wonderfully didn't have any more through her 48 hours of fever. It may seem something so simple, but it was such a huge blessing to not have to drop her fever with meds, but just let it do what it was needing to do. Thankfully I knew from the others that there were no clear infections / pain areas associated with the fever for them, and Asher didn't look in pain at all. So that helped too.
Friday 18th: Assembly today and Asher was home sleeping. Although Hezekiah wanted to go to school yesterday and today, he was exhausted by the end of the day. And then having to stand at the front during assembly while his class took turns reading their poems, made him even more tired. He was yawning away and eventually after reading his poem he came and sat with me. The teachers were worried he was going to be sick, but I think it was just pure exhaustion. He wasn't gotten back to normal eating yet, so it's understandable. They didn't have a microphone today, but what I heard of his poem was lovely. 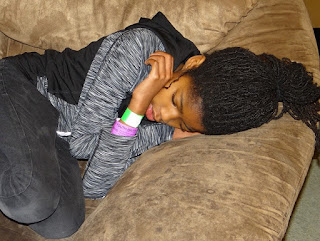 Saturday 19th: Ballet exam practice day today. Rachel didn't really want to dance, but her teacher wanted her there to at least walk through what she could. She borrowed a protective boot from a friend and managed to do some of it. Ruth did her practice too and then slept most of the afternoon.
Sunday 20th: Ruth had a "Big day out" with some friends today, organized by the HYP. It was a birthday celebration for one of her friends that the group of them attended together. They did laser strike, went to inflatable world and then ice skating. So a very busy day that exhausted Ruth again. She spent the evening resting. It was a really special day though and I'm glad she got to enjoy it with them. 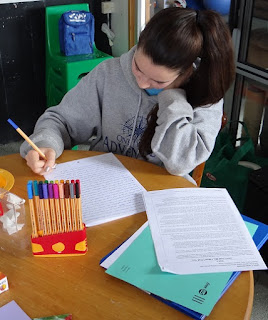 Monday 21st: Rachel did a mock external exam for English today. So I was around as the supervisor. She only has externals for English and Classics - so it was good to get a bit of "practice". The external exams will happen at the end of November. So they have plenty of time to use these mock exams to learn from (or get guidance from the teachers on how to improve).
It was a very hard start to the week for Asher. She was totally over her fever, but had a crying session yesterday afternoon where we didn't know what to do to get her settled. Unfortunately it happened again this morning. It seemed to be related to me asking her to have some breakfast - so eventually she went to preschool without having eaten anything. She had stopped crying when I said we were going in the car, but she started up again not long after I left her at preschool. It was the first time I have ever had to leave a child at preschool crying, so that was hard. Not knowing how to help her though, and not knowing what was wrong was worse though - so I was in many ways relieved to be able to drop her off. I had no idea how to help her. 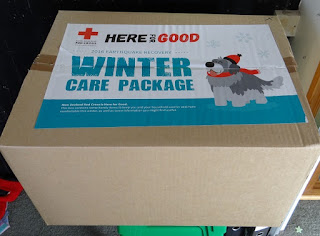 Thankfully within 45 minutes I got a text from the preschool letting me know that she had settled. And half an hour after that I got a photo of her sitting at the table for morning tea, happily eating. It was so nice of them to give me these updates. It helped me to not wonder if she was just crying the whole morning away. We still have no idea what was wrong - and that's the hardest part.
Another kindness today was when ladies from the Red Cross popped in with a blanket of treats (including hot water bottles and a beautiful blanket). It was nice just chatting to the ladies after the very emotionally start to the day. It was so good to just know there are people around who care and want to help if they can. 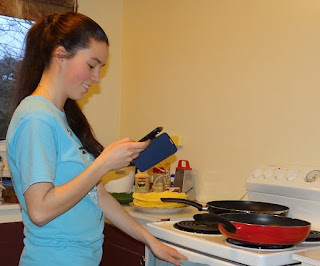 Rachel decided to make pancakes again this evening. So we all got spoilt by that. Not too many were eaten today and she also made a quadruple batch - so she had a lovely big pile of pancakes for the fridge to be enjoyed over the next couple of days. Thanks Rachel.
I had to take a photo of the teenager on her phone. She had just taken a photo of the big pile of pancakes to show Daniel how many actually get made if they are not being eaten as the come out the pans. :-) 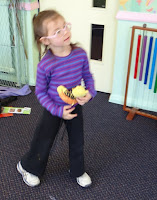 Tuesday 22nd: After a rough start yesterday she had a great day at Champion Centre today. I was especially pleased when she happily danced with a different Teddy Bear song. I just didn't get a great photo. It was so special though. 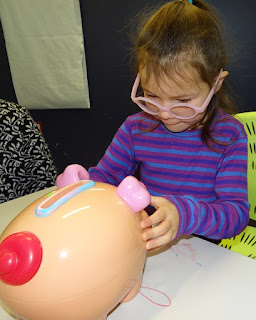 She had a great session with her computer teacher (compared to last week which was terrible). And then I was really impressed with how she did with her Early Intervention Teacher. She had spotted this pig on the therapists' shelf and kept asking for it. She accepted us telling her to first finish what was on the plan though, and got through all her "work" and was rewarded with time playing with the pig. When she first played with this she just loved putting the coins in the slot. Now she more enjoys just pushing his nose and hearing the different things it says or songs it sings. :-)
Rachel's foot has been really sore since the practice on Saturday - so she skipped her Tuesday dance practice today. 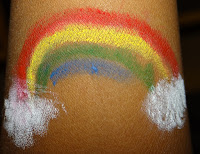 Ruth got a new posting from her Guide leader and had fund getting some activities done today.
She got these face paint pens and drew a small rainbow on her arm. 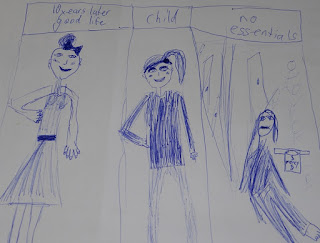 This was another one of her creations following some instructions for a task.
Thu 24th: With Rachel's foot still being really sore, we just skipped dance again today (thankfully we could skip the outing completely as Ruth's practice is on Tuesday's as prep for the exam). The physio had suggested Rachel just rest it totally over the next few days. She will take anti-inflammatories too till Monday and hopefully that will help reduce the inflammation as well as helping with the pain. 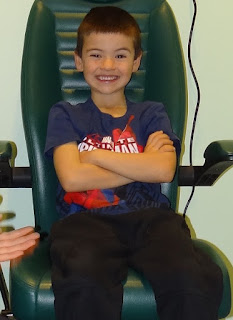 Thankfully every day the pain has been getting less. Up till Wednesday it was sore every time she put any weight on the foot. The physio strapped it for her too, which helped with work on Thursday.
Friday 25th: It was a "teacher's only day" at school today, so I had planned to take the 3 middle children to get their eyes checked. Ruth and Hannah needed their yearly check up and I decided to just make sure Hezekiah was fine. Sometimes he complains that writing is too small. Thankfully his eyes are fine though. There is about 1 point that he would benefit from a prescription for reading, but they never really bother for such a small change. 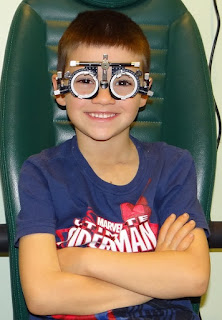 Ruth had a 1 point improvement with her eyes, but again, with such a small difference it was not worth changing her prescription. Hannah however, has had a bit of deterioration and does need new glasses. So I'm glad we got them checked and sorted.