A blanket and bumped fingers 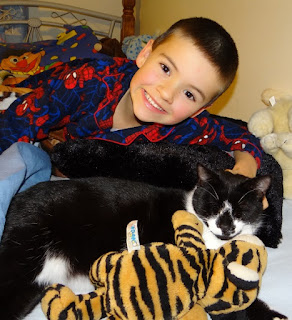 Monday 31st July: It's so very special watching Hezekiah with Anakin. Every night Anakin goes to bed with Hezekiah and he even has his own special teddy to sleep with. 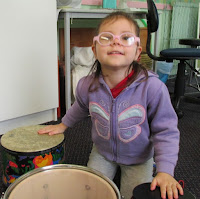 Tue 1st Aug: Great to be back at Champion Centre after missing 3 weeks (holidays and then being sick). She had a new drum song today and it was great to see her enjoying the drums so much. Not the best photo - but a wonderful time playing. 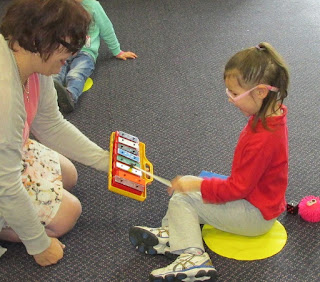 I also finally got a photo of her at group music time with the welcome song. Each child gets to play a bit as we sing "hello" to them. It's wonderful watching Asher through this. She has such a big smile on her face and watches the other children as they play with such joy and anticipation on her face.


Wed 2nd: Children photo gotten this morning. Tuesdays and Thursdays are always impossible in the mornings, so I was glad I remembered today. 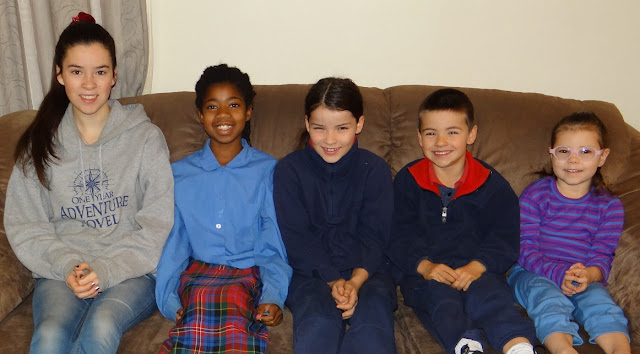 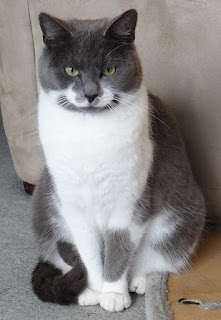 We said goodbye to Little Miss this morning. Anakin and her have been fighting a lot lately and so we decided to rather find another home for her before one of them gets hurt.
When they came to pick her up this morning her new "mum" just fell in love with her so quickly. I loved hearing Rachel describe the ladies reaction to the children when they got home from school. It made us all feel so much better knowing that Little Miss is going to be loved (and spoilt). She even had a sheep's skin in the basket for her trip to her new home. I heard later that she was already purring as soon as they got home. This couple had to put their old cat down a couple of months ago, so Little Miss is going to fill that gap wonderfully. And I think she is going to enjoy the quieter home - with just 2 people and no other cats.
It was great to have Asher's EIE come and spend the morning with her at home. It helps her to get to know Asher a bit. Hopefully it won't be too long before the paperwork is all sorted and Asher is back at preschool. 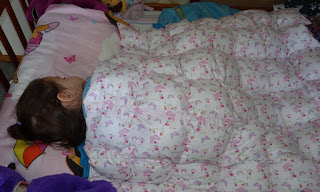 At 1pm she had a 1 minute TC. I had bought her this weighted blanket (it weighs 5kg) and it arrived this morning. I was so pleased to have it for her during her nap. She often shivers after the seizure, and so this lovely blanket can help her body feel safe and relax. Often I would try and lie with Asher, holding her and putting as much of my arms weight on her so that she could feel safe and secure. This blanket now does that job - and far better than what I could do. 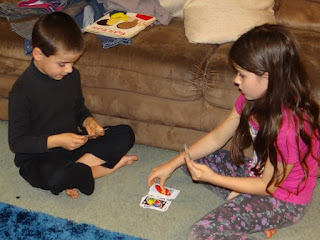 Playing some Uno this evening. These two have been getting along a lot better latterly and really enjoying playing together (the way they used to before Hannah started school). I am so thankful for this. Hannah wasn't really wanting to play Uno this evening, so I was especially pleased that she did (just to show love to Hezekiah). 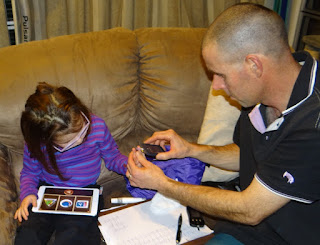 It won't be long now before we can stop with Asher's twice daily finger prick blood tests. She has been such a star with this. She says "test" and sits so well. It will be great to not need to keep doing it though.
Thursday 3rd: Asher had a 1 min TC at 9am this morning. I had taken her into the class room at school to try and get her familiar with the room (and more comfortable there). The kids had Jump Jam this morning, so I thought it would be nice for her to follow along with the children. If this is something she is a bit more familiar with (going where other children go - not off on her own) it will help for when she starts school. 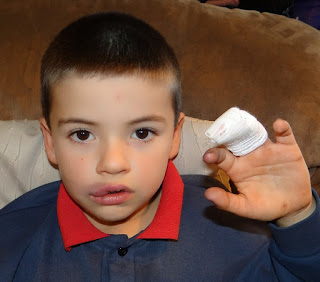 Unfortunately just as it was about to start, she had the seizure. So she didn't get to do the dancing with them.
When I picked the children up from school we had our first ever "finger in a car door" incident. I got such a fright and was rather scared about what I would see when I got around the car to Hezekiah. I was so relieved when the finger tips where still on. Just broken skin (not too much bleeding) and a lot of pain. He got such a fright that he bit his lip. We sorted the fingers out when we got home, and he put ice on them, but it was only later we realized how badly his lip had been hurt. I had seen a tiny bit of blood, so guessed he must have bit his lip, but was shocked with how much it swelled. 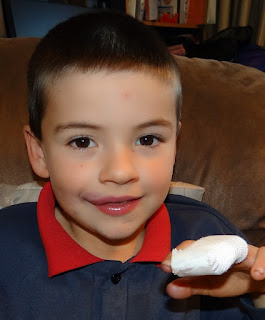 We took the photo with the straight face so that you can see the extent of the swelling. It was hard to eat with how big it had gotten. He really looked like he had been beaten up. He still had a smile for me though. Such a brave boy. 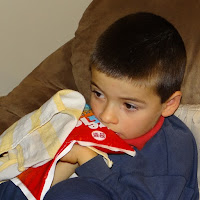 Getting much needed ice on that lip as well as the fingers. Both the older girls were helpful in guiding me through wrapping the fingers. I was nervous about a plaster - worrying that they may swell (and then the plaster is too tight). Thankfully I found some dressing plaster that I could cut and use and it worked really well. Ruth gave me the extremely helpful instructions on how to wet the middle section so that it didn't stick to the cuts. I didn't do that on the first dressing, and we had to wet them to loosen the stuck dressing. So Ruth helped sort that out and the 2nd dressings worked really well. 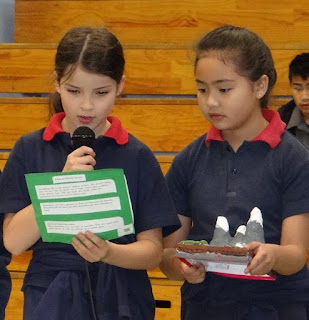 Unfortunately Asher had another 1 min TC at 4:30. So a rough day for the little girl.
Friday 4th: I took Asher with to assembly today. I'm hoping that by being around the children more she will get more familiar with the environment. I had her bag of toys with (church toys) to keep her busy in her buggy (and hopefully quiet). I was really thankful for how well she did. Next time I must just sit in a better place so she can see better. She often looked up and listened to the people who were talking (even if she carried on with her puzzles through it). And she loved clapping with everyone else. So it went so much better than I expected. She was pleased to see Hannah at the front - reading about their landform creation. 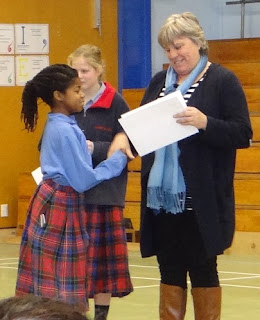 And she got to clap for Ruth too - who got a certificate today. For her positive participation in class and school wide activities! Well done Ruth. 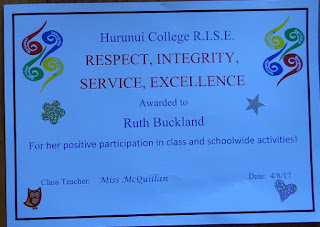 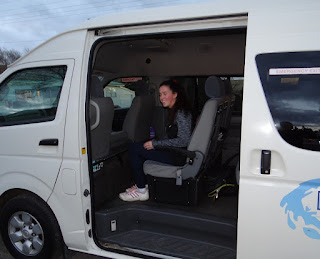 This afternoon Rachel took a shuttle into town and then got a lift with one of Daniel's brothers from town to their place. She spent Saturday with them and then she joined two of Daniel's siblings who were also a part of Sunday's St John Competitions. Until she has her restricted licence, this is the only practical way for her to get to visit them for a weekend. It worked really well with Sunday's trip. And the shuttle was much cheaper than us driving her in. Good thinking Rachel. I'm glad it worked out so well and they could enjoy the weekend together. 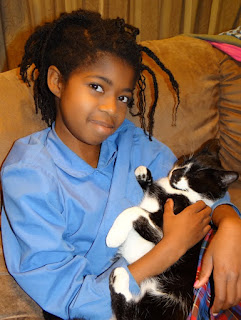 Ruth enjoying some cuddle time with Anakin this evening. Such an affectionate cat with everyone.
I didn't get a photo - but Ruth has had her first hair cut. With us re-doing her braids, the new ones are much shorter than the old. So she finally asked me to just trim them all. It was good to get her used to having her hair a bit shorter. Once we are finished re-doing all the braids it will be a bit shorter still. So it was good to get the adjustment started. And it really is blog worthy - her first hair cut in 11 years!!! Just a pity I didn't get a photo on the night we did it.
In this photo she has some "corn rows" or small "French braids" along the top (I did 6). It made a nice style for a few days - but this photo doesn't do it justice (it looks a bit messy in the photo - but it actually looked lovely and neat). We keep working on re-doing braids. Currently we try do 3 braids in the evening (rather than 6 to 8 on a Sunday afternoon). Ruth has also started undoing some herself - so some nights we get to do 4. It takes a full hour though, so she is very patient with it all. The end is in site though. I'm hoping we will have it all done by the end of September.
Posted by Buckland at 10:00 PM

I'm glad to read about your family Belinda :) God bless you guys!!