Monday 24th: During the night I started feeling very nauseous. This was what Brendon had last Saturday night, ending with him spending the whole day in bed on Sunday. Thankfully it really was just a 24 hour tummy bug. After a week I thought we had avoided it spreading, but it was not to be.
Brendon had headed off to work and although Rachel tried her best, Asher just refused to eat. So I got up to feed her. As I was up I took the kids to school, but by the time I got back home I felt even worse. Thankfully I only vomited once, but I had to ask Brendon to come home so that I could just rest (and Asher could get fed).
Although I felt a little better on Tuesday, Asher and I didn't go to Champion Centre. It was better to just have a quiet day at home. That did however mean that I also couldn't attend my appointment with my midwife that I had planned for on our way home. It worked out really well though, as she was up in our area on Wednesday with a post-natal visit. So she came to see me on Wednesday morning.
We have found a new EIE for Asher, but are waiting for Police Clearance to be done before she can start at the preschool with her. On Wednesday morning however, she came to our home to play with Asher and get to know her. So that allowed me to have time to chat to my midwife which was really great. 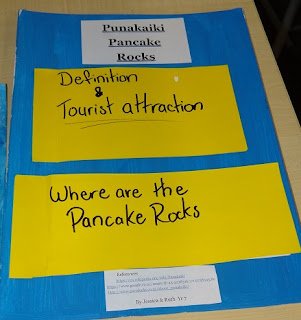 On Wednesday afternoon it was Hannah's Student led conference. We were both too emotional though, so we didn't get much done. On Thursday afternoon it was Ruth's turn. I was feeling much better by then and Ruth knew exactly how it all worked, so that went really well. Ruth is doing very well at school. It was nice to sit with her report and look at what she has already accomplished this year, and then what her next goals are. She has already reached the National Standard in Math with half a year to go. It was great chatting to Ruth about how things are done. They can go ahead with work and are not kept to only doing what is official their years work. They are split into groups according to their abilities and progress from there. Ruth still has one group that she could move up to in Math, so I know she will get all the stimulation she needs to keep going. 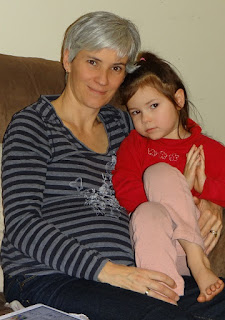 There is one boy in their class (year 7) who is so gifted with Math that he is already working with the year 11 children. So it was a great afternoon for Ruth and I and I learnt a lot about how she is doing.
Unfortunately I had turned the volume off on my phone but left it in my jacket (which I had taken off) and so I didn't feel it vibrate when Rachel phone. Asher had a seizure while I was out. It was one of those horrible times when she has pain afterwards and it was very emotional for Rachel. She said it was so hard not being able to help her feel better. And then she had Hannah and Hezekiah pestering her for things at the same time. As well as her not feeling great (she got the tummy bug last night - so today was a recovery day for her and she missed dancing). So she had a really stressful experience. I felt so sorry for her having to go through that. It must have been a very real learning experience for her though, to get a glimpse of the complexity of the stress that I am often under. 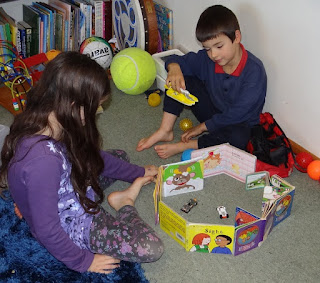 Friday 28th: Hannah and Hezekiah played so nicely together this afternoon. I always enjoy listening to the different games they create. Hannah was also excited about going to Youth tonight. Hezekiah can't wait till he is old enough to join them too.
On Wednesday evening I asked Brendon to call Asher's dietician. I was feeling too emotional about it all (so knew I wouldn't cope with a phone call) - but was also facing the facts that we may need to stop with the diet. When Brendon described what was happening with Asher's meals (needing either of us to feed her - every time), she was the one that said we need to stop. So it was reassuring to me to know that I wasn't over-reacting. It really is not practical to continue. 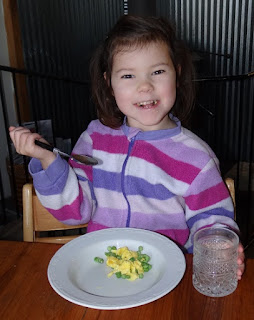 It was a terribly hard decision to make though. The diet has definitely been helping to reduce the number of seizures, and so the thought of taking her off, and facing more seizures, was really daunting. And really scary.
I took this photo on Saturday morning. An old Keto recipe with most of the fat left off. It was so good to have her asking for food and happily sitting at the table and feeding herself. The change has made me realize how very hard it's been over the last couple of months. If I think back to before the tummy bug in April, the diet was going so well. She loved all the food and happily ate everything (especially loving her frankfurters, olives and butter). Things just didn't come right after the tummy bug and then throat infection a couple of weeks after that. So we have to just be realistic with what has happened. We can't change it - and we have done the best we can. 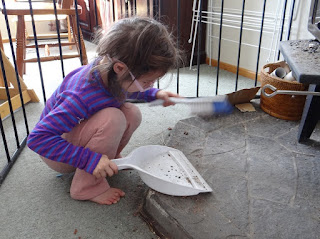 Saturday morning was spent getting a general clean done around the house. Asher wanted to help with the fireplace too (knowing exactly what to do from watching me before). She did a good job too. 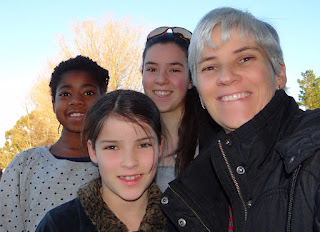 In the afternoon the older girls came with me to the church's ladies afternoon tea. 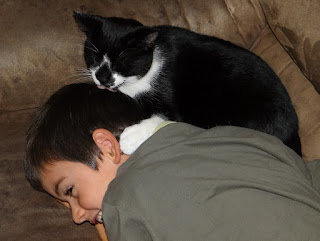 We had a laugh this evening when Hezekiah lay down next to Anakin. Anakin immediately decided that Hezekiah needed a bath. He held his head in his paws and licked away. It sounds like this often happens when Hezekiah goes to bed at night. Such a special relationship between these two. 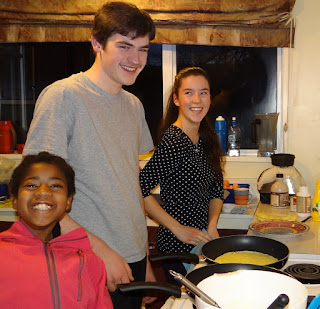 Sunday 30th: After a change of plans Daniel came and joined us for the day today. Asher had a seizure at 5pm (1 min TC again). Once she was sleeping I asked Rachel if she wanted to make pancakes for dinner. We haven't made them in quite a while and Rachel was very pleased with the suggestion.
I got the cooking started and then they asked me to flip the pancakes. Which I then did. This was enough to get Daniel wanting to give it a try. So after giving some tips, I could leave the cooking up to him. 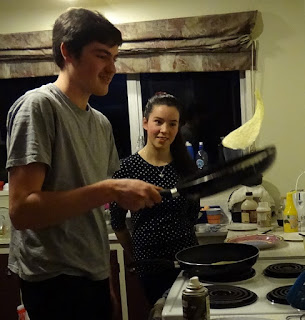 I was pleased to get a photo of one of the flips. He did a really good job. I can see this will be a regular meal with any future visits. :-) Although instead of making double my Dad's recipe, I think it will be at least tripled. They were a hit.
Posted by Buckland at 10:00 PM